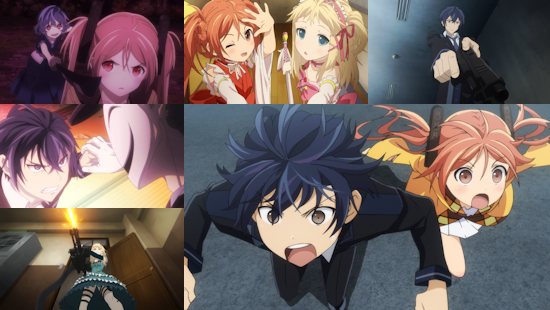 Poor old Tokyo - is there a week that goes by where it isn't irradiated, destroyed by robots or over-run by giant creatures of some description? Unfortunately, if Black Bullet is anything to go by this isn't a trend that is likely to go away any time soon, as it earmarks 2021 as the year when a pandemic will see huge insect-like creatures appearing to wipe out much of humanity and leave what remains scattering to rebuild and regroup.

A decade later, mankind has at least claimed some territory for themselves, mostly thanks to the discovery of a metallic substance named Vanadium which seems to keep the Gastrea - as these insect-like creatures are known - at bay, allowing the populace to cluster settlements around huge monoliths made of the substance. Alongside this, the population are also protected by privately run Civil Security Agencies, who employ two person teams to take out any Gastrea which stray into towns and cities - these teams consist of a Promoter, and perhaps more importantly an Initiator, chosen from a group of young children (inevitably girls) who were infected by the Gastrean virus in the womb and thus hold some of their impressive powers while simultaneously retaining their humanity.

Of course, that "contamination" of these children with the DNA of the beasts which have terrorised the world has led to them being ostracised by the majority - referred to as "Cursed Children" and kept at arm's length, with even their duty as Initiators treated as little more than legitimised slavery by most of the Promoters charged with looking after them. A rare exception to this rule is our protagonist for the series, Satomi Rentarou, who tries his best to treat his particular Initiator Enju Aihara as a normal girl, sending her to school with ordinary children in the hope that her secret is never revealed to provide a counterweight to her day-to-day job of exterminating Gastrea with extreme prejudice.

This setup gives Black Bullet a fair amount to work with - on the one hand you have the ongoing fight against the Gastrea, which frequently spills beyond a simple man versus monster fight to take in divided political lines and humans who appear to be working directly against humanity's survival to offer up some varied action and dramatic moments in this regard. On the other you have the emotional crux of the show, that being the treatment (or maltreatment) of the Cursed Children - a group who are undoubtedly human at their core yet are treated otherwise out of fear, convenience or a simple misunderstanding of their nature.

Unfortunately, the series doesn't quite give either element of the series the treatment it deserves. Perhaps its most promising aspect is the relationship between Promoter and Initiator, which has strains of Gunslinger Girl inherent within it yet never quite manages to explore that angle as fully as it should. At times, there are some truly touching moments to be found amongst the hardships faced by Anju and her ilk, but these moments are often subsumed by the way the series plays her relationship with Satomi either for laughs or to play into the show's harem elements, which dampens any impact considerably. There is a way of compartmentalising or allowing these parts of the character's relationships to co-exist, but Black Bullet only really seems to key into them late in the series, thus stripping back some of its potential significantly.

Meanwhile, the action portion of the series is also a case of "almost, but not quite". The show feels like it wants to follow in the footsteps of Attack on Titan with its bleak, violent outlook, but whenever the opportunity to traverse that path looms into view the series all too often slams on the brakes and dare not tread that particular ground. Thus, you never get the feeling that death is around the corner for the main cast of characters (not helped by Rentarou proving to be increasingly superhuman), and although the show's action is satisfying and builds to a reasonably impressive climax for its final story arc, you can't escape the feeling that it could have been even more compelling had it taken a few risks along the way.

Still, this shouldn't detract from the fact that Black Bullet is entertaining to watch and delivers a broadly satisfying viewing experience - it risks becoming an "anime by numbers" affair as it ticks off the various check boxes you'd expect of a series, but does have a scenario and characters who are strong enough to rise above those concerns, and there's still more than enough unexplored territory to warrant a second season were the powers that be to fund one. Admittedly this too leads to some frustrations born from its light novel source material - why mention the reduced lifespans of Initiators and then not explore it being a prime candidate here - but what is contained within the show is more than sound.

The show is also pleasing visually - its character designs are all very appealing and distinctive (and perhaps the show's strongest suite), and its overall aesthetic is clean... too clean, it could be argued given its post-apocalyptic setting. Sat behind these visuals are an incredibly strong musical offering - Fripside kick things off with a terrific opening theme (which doesn't help to deter those Attack on Titan comparisons, admittedly), Nagi Yanagi closes out every episode wonderfully, and in-between sits another of Shiro Sagisu's terrifically powerful scores. It has to be said that the English dub for the series is pretty flat, leaving the original Japanese audio to be your viewing option of choice alongside a solid set of English subtitles.

Divorce Black Bullet from our questions of what might have been had it executed even better on its premise and core ideas and you're left with a series that is, on balance, pretty good - well presented, entertaining and with just enough emotional gravitas to keep the viewer hooked. Certainly, there are better series that slot into any one of the genres it represents, but Black Bullet's varied fare produces a confident and satisfying whole that is at least worth your consideration.

7
It can't live up to its sizeable potential, but that shouldn't detract from what is a solidly produced and entertaining series.
COMMENT AND DISCUSS
blog comments powered by Disqus