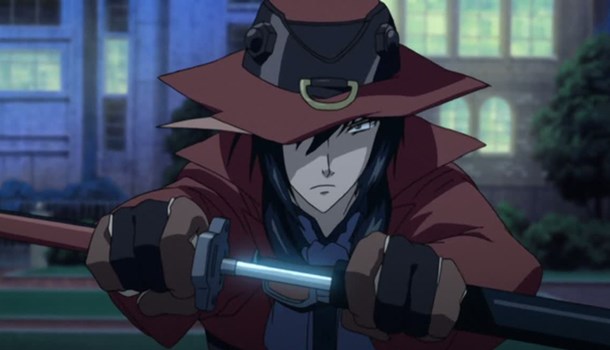 Vampire fans rejoice, because this series is just for you!

Usually when an anime is based on another media, be it a light novel, manga or game, the anime does it’s best to introduce newcomers to the title. Obviously there are exceptions to this; such is the case in the .hack franchise. But most of the time viewers will want the more important information presented to them - Black Blood Brothers will require a trip to Wikipedia.

The series revolves around a vampire named Jiro. He and his brother Kotaro are on their way to the Special Zone,  a city where vampires can live without prejudice and work with humans to make a better life for themselevs. Jiro needs to protect Kotaro from the Kowloon Children, a race of vampires that turn both humans and vampires into their kind and are considered a threat to any they encounter. Things are further complicated by the Order Coffin Company, and when mixed together all four elements become quite... messy.

Black Blood Brothers has the potential to be a truly fantastic series. Unfortunately by the time the credits on the last episode were rolling on the first disc, this potential has yet to be fully realised. The 12 episode format (which encompasses the entirety of series one) rolls well enough and is an enjoyable series in it’s own right, but it never quite reaches as far as it indicates it could, and this is a shame.

The animation has some excellent tuches, though quality does tend to vary from scene to scene. The character designs are also memorable, especially Jiro’s hat which is strikingly similar to the sorting hat from the Harry Potter films.

A special mention has to be made for the opening sequence. While the animation is what you would expect from a supernatural series, the accompanying music is God-awful. This is the headline act of my concert for terrible opening songs -it sounds like a heavy metal band playing on a selection of strung up cats and hitting them with hammers, mixed into an a church organ solo for a supernatural flavour. If this is an example of Japanese goth metal then it can stay in the crypt and be buried under a few tons of concrete to make sure no one ever hears it again.

Beyond the frustrations of the plot’s pacing and unanswered questions, Black Blood Brothers is actually quite an enjoyable watch. Not much really happens until the 4th episode, but once we get there things really do start to pick up. If you like your supernatural anime and are looking for something a little less bloody than Hellsing, then Black Blood Brothers could be right up your street. For a £12 purchase, you could do a lot worse and you certainly won’t feel cheated for the hours you'll spend watching it.

7
An unfinished anime for sure, but not totally without merit.
LATEST REVIEWS