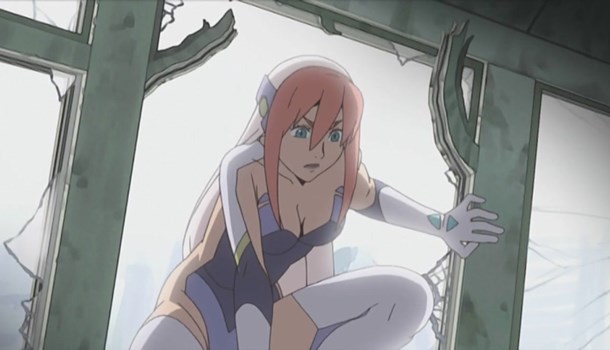 If there’s one thing that recent events and the second season of Birdy have taught me, it's that it isn’t easy being a Cop. You are lied to, targeted by hostile people and worst of all, sometimes you are forced to arrest (or worse in Birdy’s case) the ones you are closest to; but then again, at least most normal people have a choice. You, I, everyone at least has a chance to choose their career in life. Not the case here.

Birdy Cephon isn’t your normal kind of hot alien girl. She is special in ways that other members of her species aren’t. She was manufactured by the Federation to be a walking weapon; designed, trained and forced into being an officer of the law. She had no parents, no family, and her only personal contact was with a small boy called Nataru who she bumped into completely by accident when she was only a few feet high. Her relationship with Nataru was hard at first. She was overly aggressive (not entirely unexpected considering she is a living weapon, undergoing hours of combat training from a very young age), as subtle as a brick to the face and un-sociable. However, with time they grew closer to each other, until a massive terrorist incident started by Nataru’s father drove them apart.

Into the present day, a short time has passed since the Ryunka was momentarily unleashed on the Earth, destroying tens of thousands of innocent lives and laying waste to my favourite part of Tokyo in the process. The Ryunka was contained through Tsutomu sacrificing his body and using it as the host, saving the lovely Sayaka despite the cost of this heroic action being that he was forced to continue living a double life within the body of Birdy Cephon. Better than dying (again) I suppose?

Other than the occasional incident involving Tsutomu sneaking a look at his (her) naked soapy body in the bath it almost seems like some level of normality has been restored and all is going well. Good, relaxing times never last however, and up there in the darkness of space a prison ship is hijacked and brought to Earth carrying those who were responsible for stealing the Ryunka in the first place. Birdy is immediately tasked with hunting them down and arresting them. However, this isn’t as simple as it looks, as there is another who is desperate to get this brutal revenge upon those responsible for the atrocity on Earth  The only problem is, he is a little bit too close to Birdy for comfort...

This second series of Birdy the Mighty: Decode has taken a slightly more serious turn from the first series. There are significantly less high school shenanigans, and consequently a lot less face time for Tsutomu (clearly the creators figured out what sold people on the series?) and his class mates, with the story now focussing on Birdy, the investigation against those who stole the Ryunka and her old friend Nataru, who has since appeared on Earth. The impact this has had on the atmosphere of the show is quite striking and certainly for the better - as with the ending episodes of the first series, the second series maintains a continuously rising crescendo of its story arc throughout as Birdy fights those involved with the terrorist incident in the Federation and those responsible for releasing the Ryunka.

An interesting point of note is the improvement in the quality of the animation that this DVD release has over the originally aired TV series back in 2009. In many places, the animation has been re-drawn, specifically during the action scenes, fixing the previously atrociously poor animation quality which marred the TV release. This was my only major issue with the series when I originally watched it, and I am happy to see that producers are willing to revisit their works to correct the errors borne from tight television deadlines.

As with the first series, the voice acting is very good in both Japanese and English, with the English dub being very watchable. The lack of Maaya Sakamoto in this series does unfortunately sadden me, although the final episode of the series (which is a filler episode by the way) goes a long way to fill in this need for more Maaya.

Another side note, and a bit of a fan shout from me, is the opening theme to Birdy the Mighty: Decode's second series. Nirgilis have a habit of making lovely poppy and optimistic songs, which totally do not go with the flow of the series they are for (see: the third quarter of Eureka Seven – “Sakura” and Deadman Wonderland – “Shiny Shiny”) and “Kiseki” is no exception. I am not exaggerating that I paid an arm and a leg just to obtain a limited edition copy of their RGB album, just for this track.

So, to summarise, Birdy the Mighty: Decode's second part continues what the first series began, if only to crank the emotion, the story and the violence up another notch. As I have said previously, the series is by no means a true Shakespearean classic, but it’s bloody entertaining and compelling and that’s good enough... plus it still has a hot alien girl who can jump over buildings, breaks concrete with her fists and fights crime wearing almost nothing, which might have a little to do with my enjoyment.

9
A compelling experience that is one step above the first series.