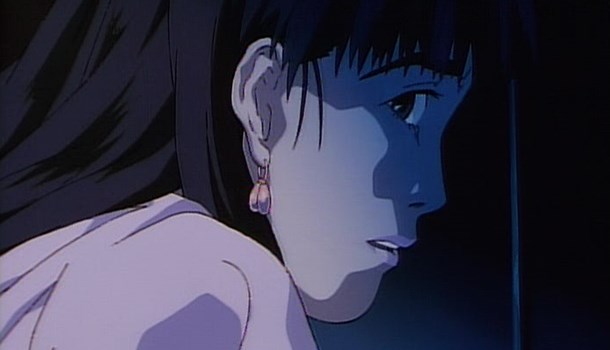 ‘From the Director of Ninja Scroll and Vampire Hunter D’ states the box. Indeed, many of Yoshiaki Kawajiri’s works were the staple diet for a lot of anime fans in the early 90's. This is from the time when the ‘tits ‘n’ tentacles’ stereotype of anime originally emerged and it’s hard to imagine how a work such as Bio Hunter was passed up at the time. It fulfils all of the criteria that made an anime great back then, though the same may not necessarily apply today.

The story revolves around a pair of biologists who apply their research into investigating an apparent ‘Demon Virus’. The virus turns the people infected into monsters who can only survive by eating other humans (liver from young females in ripped clothes is naturally the tastiest option). Luckily, one of our heroes is also infected with the virus. Struggling to keep it under control, he is able to fight on equal terms with the monsters in a similar way to Devilman. Cue a conspiracy theory about a prospective Prime Minister being infected and a bunch of random ambushes by his crystal ball-chomping bodyguard (who bears more than vague resemblance to Akuma from Street Fighter).

It’s all played straight and there’s little real humour or sense of irony in how predictable it all is, but that’s not the point. The art is moody with solid animation, the monsters are suitably icky and the action, though a little thin on the ground, is exactly the kind of thing you want to switch your brain off to. They don’t make them like this anymore and considering how much the anime scene has changed since then (thanks to shows like Pokemon and Dragonball for better or worse), it’s not often that a show like this emerges these days.

Better than Monster City, but worse than Wicked City. If you’ve been a fan long enough to know what this means then I’ll leave the decision to you. For the rest of you, this is a pretty mindless 60 minutes despite it trying to pretend otherwise. Strong stomachs may be required as there are a couple of scenes that would not have survived the BBFC back in the day.

This anime has been packaged with Psycho Diver and Twilight of the Dark Master as part of MVM's Ultimate Anime Horror Box Set.
6
Call some mates round and crack open a six-pack of beer, we’re gonna party like it’s 1993!
LATEST REVIEWS