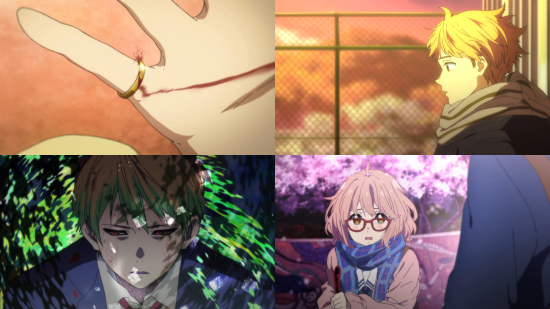 Beyond the Boundary the Movie

This was another surprise. The first surprise was the first time I watched Beyond the Boundary, a couple of years ago: The series was fun - well-paced - and full of action, drama, and heartache. It was beautifully animated and I found myself glued to the screen. The ending of the series was as unambiguous as it was final. So, the last thing that I expected was a sequel.

Beyond the Boundary has been retold as two films. The first film - Beyond the Boundary: Past - is a retelling of the series in a significantly shortened and simplified format. Compared to its predecessor, this first film is - well - inferior in almost every way. The film compresses the formation of the relationship between Mirai and Akihito, which took three or four episodes to reach a proper depth, into ten minutes. Worse still, the relationship seems forced and the first film almost relies on past knowledge of the series. It doesn’t even introduce the concept of youma, the Spirit Warriors, the cursed blood, and the others in the Literature Club. When it comes to Akihito and the Boundary youma inside of him, the film doesn’t go into as much detail, but the main action scenes are all intact. However, the loss of Boundary, and the final battle against Miroku Fujima are perhaps a little more developed than the anime, with key elements being re-written to enable progression into the second film: Beyond the Boundary: Future. In this case, the relationship between Miroku and Izumi progresses further, and they escape together after the Boundary is laid to rest once again.

However, this time, Mirai isn’t dead. She is, in fact, very much alive - though slightly diminished. She has completely lost her memory of Akihito, her past, her fight with Beyond the Boundary, her knowledge of youma, and her cursed blood. For the first time in her life Mirai's future is an open book, she can be whoever she wants.

Beyond the Boundary: Future continues a year after the first film is finished. Mirai finds herself drawn to the Literature Club and Akihito, despite the warnings of her class mate. After all, why would she want to hang around with a boy who has a fetish for girls wearing glasses?

Mirai still retains some aspects of her past life, with her familial ring - the one that was used to release her blood, to create her spirit sword - still around her index finger. When she mistakenly cuts herself, and notices her blood floating and coagulating, her lost memories begin to return. Mirai finds herself drawn again to the Literature Club… She slowly begins to return to her former duties as a Spirit World Warrior, just as the other warriors in the town start being attacked by hooded creatures. These creatures seem intent on wiping out Mirai and her friends, almost as if they are seeking some form of revenge.

What follows is both a journey into Mirai's past and the re-discovery of her feelings for Akihito. As the insidious forces grow and the deadly Beyond the Boundary becomes a threat once more. While trying to avoid giving the game away, Beyond the Boundary: Future is the ending which the series deserved. It is both fulfilling, satisfying, and thrilling. It revives the joy which the first series delivered as well as giving some closure for some, rather troubling, events.

As can be expected from those talented souls at Kyoto Animation, Beyond the Boundary is beautiful. The character designs are vivid, expressive and life-like, yet cute - especially Mirai. They haven’t skimped on the budget with the atmosphere either. As usual, a great deal of care has been given to the backgrounds, the cityscapes, and the skies.

I have once again dived headfirst into the English dub, as the cast from the series have been reunited. And, you know what, it’s much better than the Japanese original. I don’t know why but Mirai just doesn’t sound right in Japanese for some reason. I expect I’ll invite a lynch mob to my door - once again - by saying this but hey, to each their own…right? I am, however, glad that Beyond the Boundary is over. It goes without saying that the romance between Mirai and Akihito finally flourishes. Even amongst all the turmoil and death, there is at least some happiness at the end of it all.

Beyond the Boundary was one of those series which seemed to escape the usual online fanfare, though that was a bit unfair in my opinion. While I feel that the first film is a bit of a rushed experience, especially when compared to the series, the second film more than makes up for this. It finishes the story beautifully.

7
A beautiful ending for the Beyond the Boundary story