Beyond the Boundary - Complete Series Collection 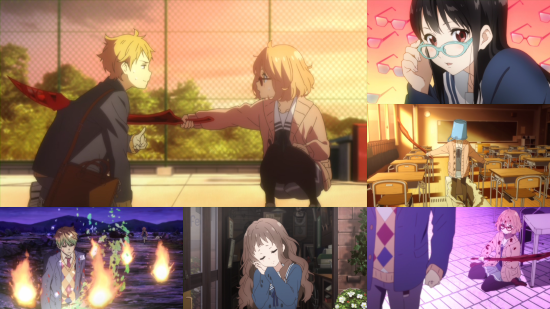 Beyond the Boundary - Complete Series Collection

As a bit of a control freak, I try quite hard to keep some element of surprise in my life. I avoid doing pre-reading or checking out of spoilers as there are times when I find that the surprise when you get a good plot twist, or find out that you have managed to snag yourself what could turn out to be one of your top ten anime, a pure treat. I have walked blindly into the Boundary, and what I have found Beyond delivered its fair share of smiles, laughs and tears.

Beyond the Boundary is a supernatural story set in a world that could be confused very easily for our own. In this world, all of the negativity generated by human emotions in the world manifest themselves as "youmu"; evil spirits that haunt, possess and even destroy our world. Some of the youmu are cited as the cause of major natural disasters, famine, pestilence, disease and war, and their control and eradication is of paramount importance to maintain the peace of the world and keep society functioning, although most are quite docile and won’t hurt anyone. However, not everyone can see them or their effects, and even then only a select few have the power to actually make a difference. Those who can, the Spirit World Warriors, are fated to spend their lives battling the youmu, collecting the spirit’s essences and cashing them in for, well, cash.

Akihito Kanbara is your normal run-of-the-mill high school lad. He lives on his own as both his mother and father are elsewhere (the less said about his slightly twisted cosplaying mother, the better) and has perhaps the most unhealthy addiction I have ever seen to eggs with rice. Although he looks normal on the surface, Akihito is essentially immortal, due to sharing his body with a youmu that is so powerful that it can heal any of his injuries instantly. As you can imagine, being one of the extremely rare examples of a person sharing a body with a spirit, Akki is constantly observed by the Spirit World Warriors due to his abilities and his proximity to the Nase family, who have been heavily involved in some pacifying incidents in their shared past. Of personal interest is the youngest sibling of the family, Mitsuki Nase, whose personality is classic tsundere with a little sheer brilliance mixed in. Between them, they form the Literary Club of their high school.

However, their coupling wasn’t to last. In the opening scenes of the series Akki encounters a bespectacled beauty, Mirai Kuriyama, a short blonde lass who is the final remaining member of a “cursed” clan of Spirit World Warriors and can manipulate their blood to form barriers and weapons of immense power. Upon meeting Akki, her first proper action after he stops her from leaping from their school building is to insert her hard blood sword into him. Akki doesn’t die, but it hurts enough for them to bond and share a laugh. She continues to try and kill him in their following meetings until finally giving in and they start to become friends. Unfortunately their meeting is fated to end badly as she is not only one of the most powerful warriors, but due to her history she is also misfortunate enough to be the only person able to stop the most powerful youmu of them all, Beyond the Boundary, whose power is able to rewrite the course of human civilisation. However, where this youmu lies makes her story all the more tragic.

I could continue on and on about the deep and fun characters within Beyond the Boundary, the links between the families, the other warriors, Mitsuki’s family and the tragedy that is Mirai’s past. But, it is testament to the writing of this series that I could keep going on and on about all of the various hooks and character developments that are opened up, reviewed and closed over the twelve episodes, leaving some time for filler in the form of an idol contest to distract and capture a fruit-juice filled youmu on the school roof. Beyond the Boundary provides a mix of intense action, deep story and exciting and deep characters, the likes of which I have not seen in some while. I cannot comment on its source material and how close it compares to the light novels of the same name, but Beyond the Boundary has left me impressed in how it has slowly developed the story. Starting small with Akki meeting Mirai with Mitsuki, bringing in Mitsuki’s family, the relationship with her family, the other non-hostile youmu before the first proper story arc involving the gigantic youmu the Hollow Shadow, where we learn of Akki’s true power, and the underlying treachery begins to reveal itself.

The beauty in Beyond the Boundary lies primarily with the art direction. Seemingly based around real world settings in a similar vein to other Kyoto Animation titles, the direction shows an excellent attention to detail when it comes to the setting and backgrounds and is taken to a whole new level once spiritual powers are brought into full effect and the clashes between the Spirit World Warriors and the youmu begin. That said, the release is thankfully being given the gift of a Blu-ray release which is the only way to admire this artistic joy.

That said, the English dub is unfortunately unwatchable due to a rather flat performance from the majority of the major actors - however this is circumvented by an excellent Japanese dub and some reasonable English subtitles that were, for the most part, free of major issues. I did note some typos and grammatical errors, but this is more related to my pedantry gaining power as I age gracefully.

My recommendation is that if you are looking for a fun series that is both serious, that is packed with action, tragedy and comedy, then look no further than Beyond the Boundary.

Final Note: The comments on art direction in the above review are not based on the review copy, but rather a Blu-ray copy bought at retail. UK Anime were supplied with a non-retail DVD copy which had been compressed onto single layer discs, causing artifacting not visible on the Blu-ray edition (and which should not be present in retail DVD discs either). In this instance, we have noted the loss in quality present in our review copy for the purpose of full disclosure to readers, but this has not affected the scoring or the content of the review - we have been promised by the distributor Animatsu Entertainment that this will not occur in future.

English and Japanese stereo audio with English subtitles. Extras consist of clean opening and closing animations, and six additional mini-episodes following on from the mid-series idol episode where Ai Shindo judges using the power of cute dance, various characters from the series. An absolute hoot!

9
A sublime supernatural series that takes us Beyond the Boundary of storytelling.