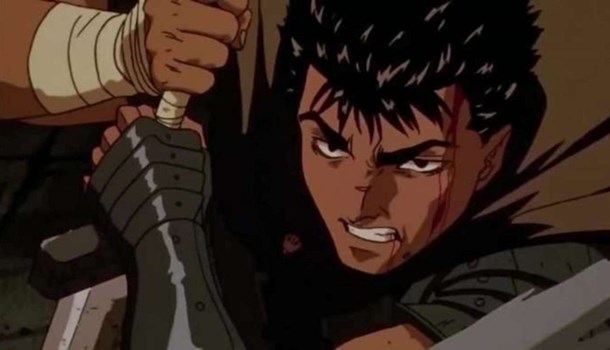 If you loved Gungrave, prepare to meet the anime that influenced it. Berserk is a tale of bloody ambition, betrayal and revenge set in a world of Knights, mercenaries and demons.

Based on the hugely popular but highly visceral manga by Kentaro Miura, Berserk the anime takes the most interesting story arc of the manga and reproduces it for the small screen.

Our “hero” is a young man named Guts who earns a crust as a mercenary. But Guts is no ordinary young man - released from the ties of fate because his mother was hung just before he was born (told you it was disturbing) he was found at her feet and brutally raised by a mercenary clan.

Wandering the world and living off the blood drawn by his sword, he meets an exceptional warrior named Griffith, the handsome and driven leader of a band of freelance fighters. In their first encounter Griffith defeats Guts and requests he join them, and the following episodes follow Griffith’s rise to power and his eventual, harrowing betrayal of his friends and followers.

Guts never seems quite at home with Griffith’s men, but as the series progresses he develops a loyalty of sorts. He also attracts trouble, as his bond with Griffith attracts the jealousy of Casca, the female mercenary who has a crush on the leader of the Band of the Hawk.

It’s important not to let the first episode throw you - this isn’t a mindless Urotsukidoji riff, it’s so much more than that. Much like Gungrave, (which also starts with one episode in the present followed by many set in the past) the tension mounts as a likeable and charismatic pair of men find themselves drawn together and ultimately blown apart.

The supporting cast are also vital to the plot, and Griffith shrewdly employs all his political nuance to place himself in the centre of rival Kings, their armies and their goals. No matter how small their roles, the entire cast have their own motivations and dreams, and it’s this richness of character that provides much of the charm.

Although a little long in the tooth now, Berserk is an incredible tale. Skillfully crafted, this anime sucks you in like no other - in terms of raw emotional impact and character development, it has no equal. Many older fans cite this as their favourite anime, and its not hard to see why.

It looks good, even by modern standards, with crisp character designs, solid animation (although a lot of pan shots too) and some awesome battle sequences. It’s hard not be impressed when watching a guy with a 6 foot sword cut loose!

The music is also unlike anything I’ve ever heard. Mixing electronica and traditional instruments, it’s equally haunting (Behelitin particluar) or rousing. But then, the music was composed by Susumu Hirasawa, the man who would go on to compose the music for the smash-hit Paprika.

But more than that, Berserk is a series that manages to elevate itself beyond being an animated bloodbath by incorporating wit, charm and intelligence far above any of the live action Conan outings. It also weaves in elements of tragedy, love, loss and betrayal making it one of anime’s true epics. And don’t forget that six foot sword...

Avoiding cliche and painting its tale in a rich and varied palette, Berserk will, if you’re anything like me, leave you dying for more as the credits roll.

9
A beautifully crafted, heartfelt and visceral tale. It stands alone.