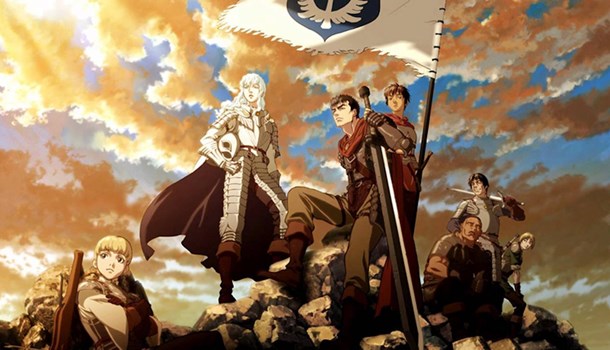 Berserk - The Golden Age Arc I: The Egg of the King

Slicing a bloody swathe into the UK, Manga Entertainment and Kaze have brought this first Berserk movie, The Egg of the King, to the UK following a successful series of festival screenings around the country - so, it’s time to wade knee-deep in blood to find out if this is all it’s cracked up to be!

Berserk follows the story of the somewhat bizarrely named Guts, a wandering mercenary who winds up being forced at sword-point to join a mercenary group called the Silver Hawks whose leader, Griffith, has some rather grandiose plans for himself. This results in the Hawks becoming a small army of highly skilled men, in turn allowing Griffiths to gain access to the nobles of the realm after he is knighted by the king for his services. At this point, that’s pretty much it plot-wise. Literally. Anything else and I would be getting into some pretty major spoilers for the film, but even those don’t deviate too far from the above synopsis.

The Egg of the King is the shortest of the trilogy of films produced by Studio 4°C and perhaps due to either this or the nature of the material itself it feels very slight. It’s more of a prologue for the other films to a large extent, spending time setting up plot threads and the political landscape of the world. As an admitted Berserk virgin prior to this (over thirty-five volumes of manga is a scary commitment for me to just dive into!) it’s hard to tell just how this compares to the original material. What I can say is that Berserk is pretty good, though there are some flaws.

The aforementioned story issues are not brilliantly handled, as they sideline most of the characters in favour of building the world (a three-year jump in the story really doesn’t help here) with only Griffiths getting any real development while our lead Guts and the female lead Casca feel chronically underused and under-developed. The rest of the cast suffer an even worse fate, as most aren’t even given a name and its nigh-on impossible to work out who are supposed to be side characters and who are just nameless background filler. In fact, the film feels so much like an elongated prologue that you really wish that Kaze had released this alongside film two, as the brevity of this first movie may leave many too disappointed and confused to be tempted back. The lack of even a cliff-hanger ending doesn’t help here, with the film just diving straight into a pre-credits preview of the next film.

The film's other big issue is the CG. In some anime it can be blended in seamlessly or used to make a visual difference, but for huge chunks of Berserk (which is almost entirely CG rendered at times) it’s horribly clunky and feels unfinished. A castle siege at the beginning of the film is particularly bad for this, resulting in the films opening sequence looking like the intro to a Nintendo 3DS game. Things do improve later on in the film, but it takes a while to get there - not to mention the fact that when it does it looks so much like standard animation you wonder why they even bothered!

On the positive side of the coin however, Berserk is great fun to watch. The action scenes are incredibly violent and smooth (when not marred by those visual problems) and what there is of the plot is certainly more than intriguing enough to keep you interested. It’s also great to see a high-budget theatrical feature being so adult (though not massively mature....) and there are clear parallels to be drawn between this and Game of Thrones in terms of style, with neither shying away from graphically showing you what’s on the inside of a man (or the outside of a woman for that matter – always remember though folks, Griffiths is a man who looks like a woman. Casca is the woman, she just looks like a man). There are some really nice touches too – the nobles having roast dolphin on the table for example just adds that little touch to push things a little further.

The voice casts differ somewhat for those familiar with the Berserk TV series - many of the Japanese voice actors are replaced by new talent, whilst the English dub brings back the majority of the actors from the series. Both dubs are more than competent and do a great job of bringing across their characters although the translation does feel a little rough around the edges in places. Musically there’s nothing that really stands out, with most things falling into the background against loud sword clangs and screams.

With a film like this what you have to ask yourself is "do I want to see the next one?" (Ignoring the fact that I had the chance to see this and the sequel at the Leeds Film Festival, but didn’t thanks to a late finishing time) The answer here is an unequivocal "yes". For all its flaws, I was engaged throughout the film and now that the set-up is done and dusted I’m really looking forward to seeing how the plot and characters develop going forward.

English and Japanese audio with English subtitle.  There are no other extras on the discs.

7
The egg's cracked but all the Guts are still in there!