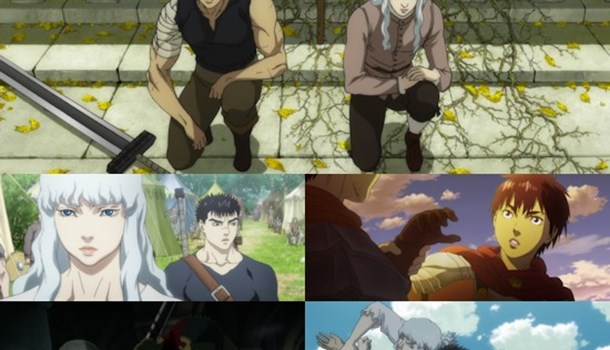 With a long-running manga and an existing TV series already in place, it's fair to describe the Berserk franchise as a well-established one that has enduring popularity.  However, that doesn't make it immune from a need to try and attract new fans as well as satisfying existing ones - enter this opening gambit in a trilogy of films from Studio 4°C which covers the story's so-called "Golden Age Arc".

This first movie has no qualms about laying its cards on the table early on, beginning with a spectacular battle raging around a besieged fort - with much of the defending army seemingly made up of mercenaries, nobody is prepared to tackle their opponent's most brutal players, seemingly leaving the fate of the town as a foregone conclusion.  However, it seems that not everyone is quite so cowardly, as one lone, young mercenary steps up to the plate and offers to take on the mighty Bazuso provided is reward is substantial enough - lo and behold he quickly despatches his opponent, turning the tide and saving the fort from its attackers.

However, good fortune rarely lasts, and when our self-confident hero is set upon by what seems to be bandits he ultimately meets his match in the form of the feminine but deadly Griffith.  While this seems to be the end of our protagonist, rather than death he instead finds himself recovering to face an invitation to join Griffith and his band of mercenaries - the Band of the Hawks.

Fast forward a few years, and we find Guts (for that is the name of our powerful protagonist) promoted to Captain and engaged in numerous battles as part of the "army for rent" that is the Band of the Hawks - although his relationship with some of his comrades remains frosty, there's a clear friendship and mutual admiration between himself and Griffith, much to the chagrin of some of those around him, most notably the female warrior Casca.  It isn't just money that drives Griffith and his fearsome fighting force however - Griffith is also hungry for power, with lofty ambitions indeed... ambitions that he will do anything to court and move forward as he begins to find himself moving in ever more important circles amongst nobles and royalty.

In truth, for the first half of Egg of the King you begin to wonder whether any kind of plot is going to surface at all, as the film prefers to serve up a constant reminder of perhaps its most striking asset - a blood and guts (with every pun intended) portrayal of its fantasy world of constant violence and war, something which it depicts with never-ending relish in a blur of flailing limbs, flashing swords and blood splattering everywhere.  Thankfully, this is also an area in which the film is very strong - some of its action sequences are spectacular in their scope as they take in entire battlefields or city sieges in a way that occasionally causes you to catch your breath.  Such moments are bolstered by the film's no-nonsense approach to depicting its warfare, be it such outright battles or more personal one-on-one affairs - seeing the last drops of life bleed out of a character is far more impactful than just hacking and slashing to up the body count, and thus some of Egg of the King's most memorable moments come from these more focused incidents.

If only we could say the same about Berserk's visuals as a whole - with a "hybrid" style that was discussed in a question and answer session after the film which makes use of computer graphics for everything but character's faces, which are hand-drawn, the film is clearly striking out in an innovative direction.  The trouble is, the system frequently lets the film down massively from a visual perspective, with CG that feels horribly clunky and looks more like a cut-scene from an early 21st century video game than a recent anime movie.  Moments like this tend to come during dialogue rather than outright action scenes (although there are occasionally glaring issues here too), but they still throw the viewer out of any immersion they might have into the film and its world in a horribly jarring way, and I really can't express enough how ugly some of those scenes look, particularly on the big screen.  Clearly this system gave the production team some major headaches throughout, and it's a shame that it seems to have marred the look of the film at times to the extent that it does.

Still, if you can step away from those flaws then this first part of the Golden Age Arc is a solid, well-realised piece of story-telling - after its early flood of action, the film settles down into a more measured pace as it builds itself around the relationship between Griffith and Guts as the former turns his ambitions ever higher, before threatening to send the whole thing cascading down around Guts' head as things being to go horribly wrong.  This leaves us in a tantalising position for the second film; thank goodness those of us here in Edinburgh for Scotland Loves Anime 2012 get to watch the premiere of that second instalment in short order.

As a newcomer to the Berserk franchise (I have neither read the manga nor watched the TV series), Egg of the King certainly did enough to draw me into its world and leave me hungry for more - it's violent but never gratuitously so given its setting, and there is a certainly solidity and believable behaviour from most of its characters with perhaps one exception (that I won't spoil, and probably shouldn't complain about anyway - this is a fantasy series after all).  It's a shame that the visuals threaten to undermine all of this work quite so frequently - I would have enjoyed the film a lot more had I not had to stifle giggles at characters suddenly getting a part-time job at the Ministry of Silly Walks or find myself jolted out of my immersion by incidental characters with faces which jarred with the rest of the scene.  Hopefully the second and third instalments might at least minimise some of these issues; if it can do so then things can only get better still for a trilogy that has set itself up with plenty of promise.

Berserk - The Golden Age Arc - Film 1: Egg of the King was screened at the Glasgow and Edinburgh weekends of Scotland Loves Anime 2012

7
A good, well-paced and enjoyable fantasy film, spoiled somewhat by some of the clunkiest CG I've seen in anime in quite some time.
LATEST REVIEWS