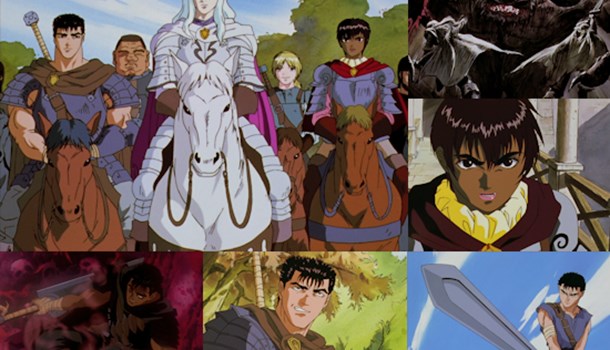 Later this year will mark the 20th anniversary of Berserk's appearance on Japanese TV screens for the first time, as the vanguard of a franchise that has seen a number of transitions from its source manga to both the small and big screen over the subsequent years. While the values of its later iterations can - and often are - argued vehemently by fans, the original adaptation has now returned to the UK sporting Collector's Edition packaging as a stunning new HD transfer.

We join the series very much in medias res, with a hulking tank of a fighter named Guts cleaving chunks out of an equally imposing demon with a ridiculously large sword. This ruined land is filled with death, despair and foreboding, but was it always this way? Well, somewhat, but not entirely, as with its opening introduction out of the way we return to a simpler time where the sky is blue and nary a demon in sight. The death and despair remain however, as now we see Guts as a young mercenary soldier making a name for himself by taking out a renowned opposing fighter in a battle for land.

Guts' heroics not only earn him a significant amount of coin, but also the attention of an ambitious young man named Griffith. The leader of a group of mercenaries known as the Band of the Hawk, Griffith is always on the lookout for a powerful addition to his impressive and growing crew, and Guts fits the bill perfectly. Initially violently resistant to the idea, it takes some persuasion before Guts becomes the newest member of the group, serving as the final piece in the puzzle that catapults them to prominence. With the relationships between Guts, Griffith, and accomplished female warrior Caska at their forefront, the rise of Griffith and company is stratospheric, although this makes the fall which follows all the more chilling and distressing.

Compared to many, my entry into the world of Berserk is likely to be an atypical one - my first exposure was via the more recent trilogy of films which covered this same Golden Age arc, all of which came while being repeatedly told that this TV anime adaptation was far superior. Setting the two side by side however, I'm not sure that case is quite so clear cut, as comparing the two in direct terms sees them trading blows to the point where I wouldn't want to place one on a pedestal over the other. Certainly, the film trilogy benefits on several levels - for all of the flaws of its blend of 2D and 3D animation, those films have a dynamism and freedom of movement that is rarely present here, its backgrounds are more convincing, and perhaps most importantly its shorter overall running time provides a tighter, more succinct experience that largely works in its favour.

Indeed, if you were to appraise this original iteration of Berserk on its first six episodes alone, it wouldn't stand a chance. The show's limited animation is a constant struggle for the series, resulting in lots of pans over still frames and backgrounds that could generously be called "stylised" but are mostly just plain simple, while the series only occasionally manages to bring any real passion or impact to its characters or the violence erupting around them. However, this is very much a show that grows into its style and learns not just to accommodate its limitations but actively use them as a notable part of its aesthetic. Those panning still frames become increasingly lavishly illustrated, to provide the kind of surprisingly kinetic shots that have come to adorn the packaging and art cards bundled with this Collector's Edition release, while the backgrounds on show become both more accomplished and pleasing as the show progresses. By the descent into madness which represents the end of the series, Berserk has a solid handle on its capabilities and leverages them to their fullest extent to ultimately do a lot with seemingly little. In short, come the end of the series most of the complaints that may have surfaced in your head early on will fade into the background.

One criticism that perhaps isn't so easy to solve is the show's pacing, although even this will depend on your outlook and what draws you to the series. In fairness, Berserk rarely has time to put its feet up and enjoy any respite - there's always a new battle to be fought, a new plot to foil or instigate or a new shift in the world and its powers. The trouble is that a lot of those moments feel rather by the numbers - little is made of Griffith's schemes to win against the odds in combat, and most of its political machinations barely scratch the surface of what feels like an interesting world. In comparison, the show's strengths are clearly in the triangle of relationships revolving around Guts, Griffith and Caska - this enigmatic trio light up the screen as their back stories or conflicted emotions come to the fore, and although much is left unexplained about Griffith in particular there's an unspoken ferocity to these relationships that powers so much of everything else that goes on. Unfortunately, all too often these relationships are pushed into the background by other events - usually a desire to focus on Guts laying waste to dozens of enemy soldiers via his bloody and balletic swordplay - and as a result I often found myself slouching back in my seat, only to perk up again when thoughts returned to the main players in its cast.

If you're just as interested in the blood and guts as the bloody Guts however, you'll find yourself very well served here - Berserk is a series that has no qualms about wallowing in its bloody violence, but still manages to walk the line where it feels like a facet of the world we're looking in on rather than a gratuitous excuse for lopping off limbs and using copious amounts of red paint. We've already talked about the show's smart use of limited animation as it grows into its aesthetics, and the blending of its visual treatment with that blood-soaked violence is certainly a highlight of the series that marks it out as a progenitor of Attack on Titan's anime adaptation in many ways. Couple that with its increasingly sinister outlook as we move into the second half of the series, and there is certainly something to be said for the dark fantasy setting at Berserk's heart.

While our thoughts are returning to Berserk's visuals, we do need to comment on just how excellent this Blu-ray transfer of the series is. Sure, it's not flawless - there are very occasional shots that look a little less sharp than you'd like, and a few moments where one even suspects DVD footage had to be spliced in due to issue with the HD materials - but as a whole this is a pristine and top-notch new transfer that seems like a worthy investment for die-hard fans of the series even if you own the prior DVD release. Subtitles on this edition of the series are also mostly good, save for some missing words here and there which take a little sheen off the presentation overall.

The series also features a mostly strong English dub, save for the role of Griffith - while this character needs a cool, detached demeanour, the voice work for this character unfortunately moves beyond this into "sounding bored while reading my lines off a sheet of paper" territory, which undoes a lot of the good work done elsewhere. Still, the Japanese dub does the job handily with no such caveats, and although Berserk's soundtrack often feel incongruous with the show it backs up it ultimately grows on you.

It's certainly easy to see why Berserk is a classic of its era - it oozes the kind of cool yet casual violence and nudity that did much to bring anime its western fan base in the first place, and still holds up as a good example of that kind of fare delivered confidently. How well the series holds up in broader terms when looked at through a modern lens is a little trickier - its animation often struggles, even if it's a struggle that the show's production staff ultimately seen to win with some smart presentational twists, and other more recent series have clearly taken elements of Berserk as part of their own successful templates as a result.

That said, there's still something unique about Berserk that allows it to endure - its handling of the show's core relationships stands out from the crowd and its eventual descent into madness is unlike anything you'll see elsewhere. For all of its flaws Berserk has plenty in its locker to make it memorable, and that's exactly why we're still sat here talking about it two decades later. Its more recent film trilogy may be more palatable in some ways, but this Blu-ray release is a great way to take in the series in its own right, while its new transfer makes for a great excuse for existing fans to revisit the show anew.

The Blu-ray Collector's Edition of the series features a rigid outer case, Digipak and set of seven art cards.

8
A stunning new transfer makes this a must-buy for existing fans, while newcomers to Berserk may have a more measured response to a fascinating but flawed series.
LATEST REVIEWS