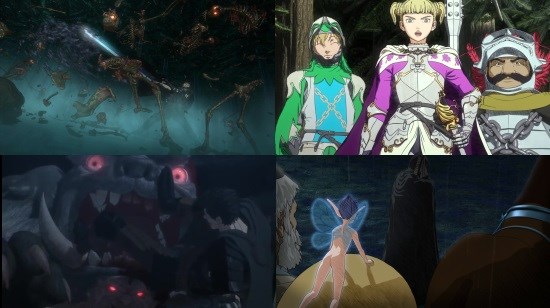 Ahh, Berserk. I had somewhat of a rocky ride with the last three Berserk movies which... well, let’s just say they didn’t always choose wisely in how they were going to deal with certain aspects of the story. Now Studio GEMBA has come out with a new TV adaptation which carries on the story from the third film. After what happened in that final movie you’d have to wonder if there was actually any decent story to come back to, but there’s a heck of a lot of manga to be adapted so it's time to see if ol’ Guts can salvage anything for this franchise.

As you may recall (or possibly not as its entirely forgivable to try and erase Berserk: The Advent from memory), when last we left the colossal swordsman Guts he’d just lost an arm and an eye, fought off the whole of Hell, seen his girlfriend raped by demons and his commander himself turn into a crazy demon who decided to start calling himself ‘Femto’. Whilst it might be forgivable to see Guts checking himself into the loony bin about now he’s gone off on a slightly different path and decided to hunt down every demon he can lay his hands on to get to the biggest and baddest demons of them all – the apostles, of whom Griffith/Femto is now a member - to give them all big sloppy kisses. No wait, that’s not right... to shove his 10 foot over-compensatory sword through their faces. To accomplish this though he’ll have to deal with the undead, holy knights who want to capture him and a Puck.

As it turns out you can do more with Berserk that, whilst it in no way redeems what’s gone before, is at least watchable and interesting. Whilst these first three episodes are very plot light they do open the doors for Berserk to do what it’s always done best – use Guts as a nigh-unstoppable killing machine who chops things into little pieces in a variety of different ways.  That’s fun as far as it goes. Unfortunately however that seems to be about it for the moment as there’s not a whole lot else going on. A potentially interesting plot line about the leader of some holy knights who turns out to be a masochistic flagellant resolves itself by the end of episode three; the first episode is entirely stand-alone; and the only thing close to a recurring companion for Guts (who really needs a good one as this kind of character just isn’t good enough to lead a series on their own) turns out to be a super-annoying emasculate Tinkerbell-wannabe called Puck.

The thing that really hurts the series though is the animation. The series has done its best to emulate the style of CG animation used in the films (though they appear to have jettisoned the concept of using traditional animation to handle things like faces) and the result, on a significantly lower budget, might have been passable if you were producing a cut scene for an early PlayStation 2 game. It’s 2016 though, it's ugly. They also use a variety of shortcuts that they presumably hope you won’t notice that turn out to be incredibly noticeable and distracting. Like the fact that a lot of the shading looks like someone’s scribbled over the top of the screen with a pencil. Or that fact that a female character who spends a whole episode topless has no nipples and her breasts have utterly no movement (never thought I’d say I missed the black bar of censorship but it was better than this...) Well, points for trying but once the first few scenes of test footage were ‘finished’ they should probably have realised this wasn’t going to work.

The one thing you can say is that they’re defiantly giving it the old college try as the show has another 21 episodes still to come so there’s defiantly time for improvement. Who knows – if Guts can find himself some decent supporting cast again and a more engaging story that stays the course then maybe some of the more glaring animation problems could be overlooked a little, so fingers crossed on that front because I do feel there could be potential here. Based on these first few episodes however, I wouldn’t be locking Berserk into your weekly viewing schedule just yet.

5
If nothing else, the animation quality will make you sick to your Guts.