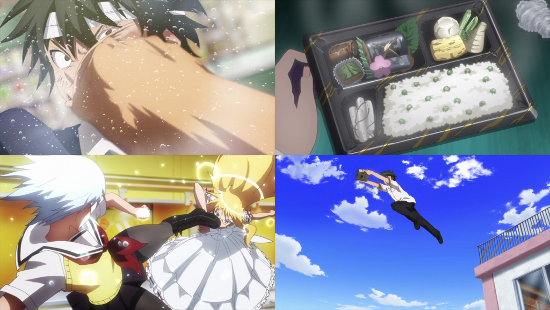 You Saito is a bit short on money. Rent for his dorm room takes up the majority of his income, and so when he spies the chance to get a well-rounded boxed lunch for half off down his local supermarket, he jumps at the chance. Sadly, someone else has the same idea and jumps him. You gets demolished in a brief fight, and has to go hungry. One of the more successful lunch hunters takes pity on You and decides to induct him into the bizarre underworld of Half-Priced lunches, a strange ecosystem with a strict code of honour where combatants known as “Wolves” beat the living daylights out of each other in order to get their hands on discounted dinners. Can You shape up and get himself a square meal, or will he be stuck eating instant noodles forevermore?

Ben-To is at its best when it fully buys into its own ridiculous premise and runs with it. The tiny world it spins around discount food time at a supermarket is certainly absurd, but it has enough grains of truth and more than enough heart to get you to suspend disbelief. Having worked in retail myself it also rung true and was enjoyable on a personal level - especially when the show asserted that you should never harass the person doling out the discounts. (Seriously, don’t do that.)  The code of rules that the Wolves follow is well-crafted enough that you can buy into it, and it produces interesting storylines as it explores the various characters, factions and tactics that inhabit the warped ecosystem. For me, the show thrived when it was being self-serious and buying into its own absurd premise - everything that plays out is stupid, sure, but in a glorious and fun way that leads to a surprising amount of humour and cool fights. It even manages to sneak in a little world-building and mythology that helps to buoy some of the more ridiculous plotlines that crop up.

By comparison every time that events slowed down, took a step back for a dose of reality or shoehorn in an unwelcome fan service moment, seams quickly began to appear in the show as the suspension of disbelief broke down. This leaves you with a rather dry,unremarkable series that plods along until it finds its absurd spark once again. Nowhere is this more true than the random swimsuit episode at the halfway point, which is utterly forgettable until a fight breaks out over a set of floating lunches in a pool.

As alluded to earlier, the show has its share of unwelcome and at times groan-worthy fan service. It crops up in a number of ways, each of them contributing to a boring mass that bulks out the show. Let me count some of them: You sometimes gets confused and assumes people are talking about sex and gets himself into wacky misunderstandings (well, he is a protagonist from a light novel series after all); there is a female cast member who exists simply to beat You up and perv over the other female cast members; and the main female character Sen is cursed with having the camera stare at her thighs constantly. Another female cast member exists to have the camera focus on her ample chest constantly - the initial joke was that you never get to see her face, which was funny once and after that it becomes the laziest possible form of fan service.

Taken as a whole the show has an unwelcome male gaze that really makes it a drag to watch at times - the second major arc in particular spends two episodes spinning its wheels slowly setting the plot up while being vaguely lewd and not at all interesting. I’m not a puritanical person but I often found myself wishing that the limp fan service was excised to make way for more food battle nonsense.

In-between the fights and fanservice, the series has a fair smattering of humour on display which hits more than it misses - part of this may be due to my personal like for slapstick and over-enthusiastic fujoshi characters, so your mileage may vary. It never outstays its welcome however, which helps maintain a brisk pace to things. The show also has a bewildering number of SEGA references poking out of the edges and the greatest joke of all - You has a picture of Sonic the Hedgehog as his mobile phone background. Perhaps the fights are taking a toll on the poor lad.

One thing the series pulls off really well are the fight scenes themselves - they are exciting, kinetic affairs, with participants constantly moving and getting attacks in where they can. A combination of camera movement, careful use of fluid animation and above all lashings of slow pans while sweat flies at the screen give a great sense of impact to them. Especially the sweat - once noticed I couldn't unsee it.
Something which I really appreciated seeing is how You is almost always bandaged or scuffed up for days after a fight, and usually in different ways each time. This is admittedly minor, but this extra detail really helped to sell the fights that he was throwing himself into.

Another thing the series really nails are small directorial flourishes - every now and then the show will have a moment of brilliance, such as showing you a series of rapid shots which convey a lot of information in the space of seconds. These flashes of clarity show a degree of care and love for the material that shines through - sadly explaining one would take a paragraph and suck the power out of it!

Something else I really want to call out is the great soundtrack, which utterly caught me unawares. It spans a wide variety of genres and crops up in the most unexpected moments, bringing a lot of life and energy to the show without falling into the easy trap of being obnoxious. I often found myself sitting up on the sofa marvelling at both how imaginative the score was, while still managing to fit in. “Wait, why is there tribal chanting right now?” being one item I have in my notes. Checking in later I found it was composed by Taku Iwasaki of Gurren Lagann fame, which certainly explains a lot.
One part of the audio that doesn’t quite stand up is the dub - this release pulls the same trick as The Devil is a Part Timer and greatly lowers the volume of the soundtrack in the English audio presentation, making the audio mix sound off-kilter. The dub track also sounded overly compressed on my audio setup, which dragged down an already lacklustre set of voice performances.

A final note: you probably already guessed this given that this release is being put out by Manga Entertainment - the DVD chapter markers make zero sense. I managed to forget this at one point and landed myself 8 minutes into an episode when I only wanted to skip the opening. So be aware of that! Thankfully the video encode is competent, so the show looks perfectly fine.

I enjoyed my time with Ben-To, no doubt helped by my own experiences/trauma from working retail - the bizarre world it paints of people beating the snot out of each other for a 200 Yen dinner felt oddly close to reality, especially given how self-seriously it was portrayed. The thing that really lets the series down for me was the constant unwelcome encroachment of bland fan service, which could easily have been cut out without loss. If you have the patience to skip past that however, Ben-To is surprisingly gripping and a damn fun watch.

English 5.1 and Japanese 2.0 audio with English subtitles. Extras include textless opening and closing songs, a Live-Action parody skit with the dub cast, and English cast commentaries on episodes 3 and 7.