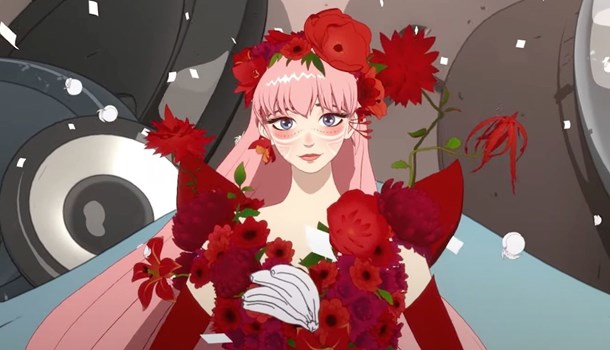 My first contact with Belle was hearing about its 14-minute standing ovation director Mamoru Hosoda received at the Cannes Film Festival, which was always appended with it being the seventh longest in the history of Cannes. This sets up enormous expectation, an expectation I aimed to put aside as I slipped into the screening room to allow the film to unfold before me. That said I had great goodwill for the film, I wanted it to be excellent, I wanted to be excited about it. Such a shame that within the first minute the film managed to curdle my goodwill by treating the viewer as an idiot (something that I will return to and I realise this is a very personal gripe) and as you may have guessed I am in the minority because Belle is beautiful to behold, sounds gorgeous, has a great narrative jag towards the end but is not a film worthy of a 14-minute standing ovation. It does some things bewilderingly well and some things, terrifically averagely.

After an early trauma, 17-year-old Suzuis a shadow of herself, until she enters the virtual world of “U”, where via her avatar, an “AS”, she becomes a famous singer, Belle. In U she meets The Dragon, a dangerous outsider chased by the self-styled champions of U, and together Suzu/Belle and The Dragon both learn to throw off the shackles of their past.

Very early on in the film you recognise that Belle is Beauty and the Beast with different trappings and some very particular messages about the internet, U very clearly standing in for our own less substantial virtual world. Hosoda notes that the film intentionally speaks to the dangers but also the inherent positives of the internet and mass connectivity available to people, especially children. U is not the internet though, but a virtual world, more akin to an immersive William Gibson vision of the Matrix with a dash of his simstim; users logging into U for the first time have their biometric information read and that data builds their AS, their AS being a living entity that reflects their actual state. U then is another world where you can start again (words the film uses up-front) and exists as a sensory experience not a blank screen in front of you or even a VR experience. Cinematically this affords Belle the capacity for visual and aural exuberance and it embraces these challenges full on. U is a brilliantly executed and animated experience, the imagination and nuance that is put on screen is downright impressive and immersive, from Belle’s own beautiful character design to all the various other AS's, which run the gamut from ghostly forms to gruesome baby forms, but importantly when we understand who some of the side characters are in U their AS reflects their actual person, as is should be. The scenes in U are often where the film soars, including and especially the soundtrack, with Belle’s performances, oft riding on the back of a whale, really hit you on the big screen with booming speakers. Songs in films can really fall flat but not here, as with the imagined landscape of U swirling round them, the songs become a triumph. I can imagine people running to streaming platforms to find them again after the film has finished.

What felt less of a triumph sadly were the protagonists. Suzu, never once felt like a sympathetic or particularly interesting character. Yes, we learn early in the story of a trauma as she lost her mother as a young child, which has profoundly impacted her, but one of my real issues is that the film never seems to properly flush out why. It's just made her the way she is because it has – it's a real issue with Belle that it tends to tell you a thing without really delving deeply into it, making the narrative a bit superficial. Suzu felt flimsy and frankly none too intriguing; I couldn’t find any emotional attachment to her whatsoever. In fact it's for this reason (and not the free wine) that I saw Belle twice, and my engagement to Suzu as a character did not improve with a second viewing, though the second did make me recognise certain key narrative plants you can easily miss the first-time round. This is not helped then by the entrance of The Dragon, who as you’ll have guessed is the beast character. The Dragon, we are told, is a menace to U. Why? Errr. Dunno really. True, The Dragon interrupts one of Belle’s concerts, but this happens because the guardians of justice chase him into it. The narrative then tries to tell us Why The Dragon Is So Bad! and it’s such a total shrug of the shoulders part of the narrative that both times I thought: “really?”. The Dragon fights in the arena and fights dirty. How? He fights till the data breaks. “How does one break data? What does that even mean?” And you’re telling me The Dragon is some incredibly wanted notorious creature because he fights in an arena meant for fighting? If The Dragon were so notorious why is his interruption of Belle’s concert the first time we hear of him? This is another issue with Belle, often it provides exposition at just the moment before something happens or just the moment after an event happens, rather than plant information throughout the film to pay-off at a different time, except for a key narrative jag and relating to those characters I did like, the side characters.

So, beautifully animated and designed, yes; tedious trope, also yes. Belle follows The Dragon because this is Beauty and the Beast - and because he interrupted her concert - but really it just felt to me that she does so because it’s a retelling of a fairy tale and not for any genuinely compelling narrative reason. I couldn’t find anything in their relationship that signals connection between Belle and The Dragon. The Dragon, when Belle finally finds him, is tropish: bellowing “don’t look at me!”, “get away from me!” It’s as unimaginative as hell and dull as used dishwater, if still visually ravishing. The problem is that this is necessary for where the film narratively jags towards the end. That element - and if you’ve seen the film you’ll know what I mean, if not I’m not going to reveal it - is one I liked even if I felt it was never fully committed to by writer/director Hosoda (because he should have delved deeper into it than the superficial denouement he gives us), means that The Dragon has to be a cypher leading up to events that will follow but it also means that it’s hard to really see why Suzu/Belle really gives a damn about The Dragon. Yes, her best friend wants Suzu to find out who The Dragon really is, but even this feels flimsy as well as immoral; but as this is a central element of the narrative, it should be swirling, gothic romance but ends up being disengaging because I just didn’t find it emotionally plausible. 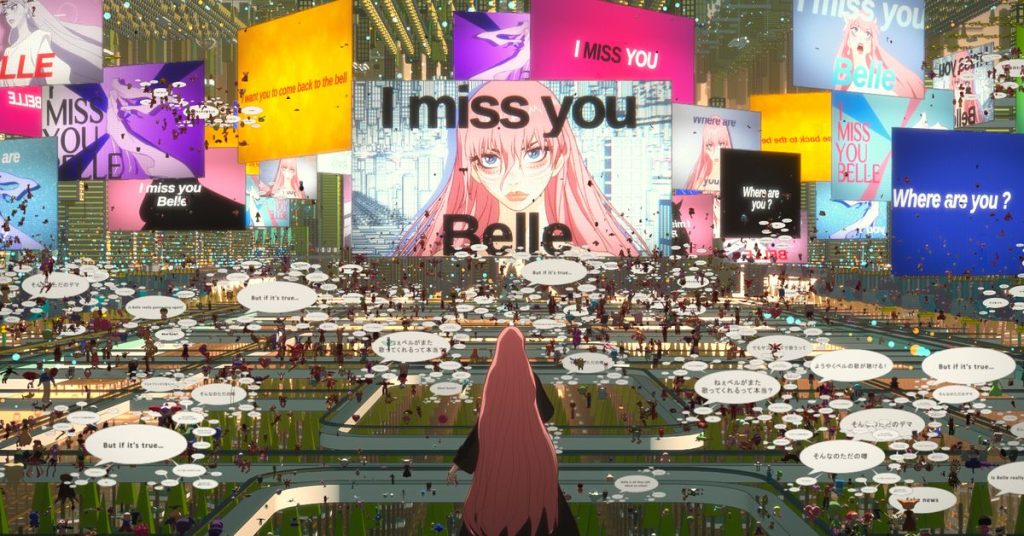 It’s sad because the story of the side characters, from Suzu’s best friend, U manager and caustic wit, Hiro; her old friend, the athletic heartthrob Shinobu; school beauty Luka; and canoeing Kamishin;  have far, far more compelling emotional journeys than Suzu’s. despite the fact that most of them get very little screen time.

Yes, Suzu gets the big "Be Yourself" main event story which is where the more pronounced emotions are, as well as the more disturbing narrative elements arrive, but the nuances in the relationships with the side characters are just more relatable, more humane and again more compelling than the central plot. I think perhaps Belle struggled from my perspective because it takes a particular issue, one the film cannot reveal until almost at the end, and because of this the narrative and core characters cannot be properly developed. Many cracks are papered over by the magnificence of the sequences in U but it means that, especially during the second viewing, while these the visuals and the songs are still magnificent, because you know what’s coming the film if anything becomes less interesting. Whereas, I feel Hosoda should perhaps have made a different film, one that commits to the narrative elements that are more surprising and explore those more deeply. I recognise there is one very big issue with my opinion, which is if Hosoda did this it would be less accessible to children, the younger of which might already be disturbed by where the narrative goes but why not, it never hurt me none growing up (hopefully).

Why did Belle curdle my goodwill? Because it opens with: this is U, this is what an AS is, these are the mechanics. These kinds of opening expositions irritate me no end. For me part of the joys of a story are putting it together. Yes, exposition is necessary but good storytelling places it throughout. Exposition as I have said in Belle is often handled appallingly, though when you come to the end of the film, I recognised that I think the opening is intentional and not meant to be exposition, because the film ends with some of the same wording and it reinforces Hosoda’s intention that the internet, that mass connectivity can be force for good and create a new you. So the second time watching Belle it didn’t irritate me but dammit the first time I was almost spitting my wine on the floor in exasperation. Again I recognise this is a very personal gripe but then film is a very personal experience.

Despite my feelings about the film I genuinely believe, especially the younger generations who are less cynical and less likely to pick a film’s narrative apart, many people will love Belle, find it an utter joy, and there are many positive messages throughout, often made in passing from minor characters (though I also think there are some unintentionally depressing ones, which again is a very personal reaction). Clearly they must be considering the Cannes adoration, but then I did wonder if it was because Belle is the new Parasite: the moment where a given establishment recognise all the interesting work that has been going on outside their normal sphere. I say this because Parasite was good, but even the director had crafted better films before. I feel there are better animated films out there, though I applaud Belle for its narrative shift and its visual opulence, the magnificence of the design of U and all within it, and the musical excellence. But nevertheless I just couldn’t care enough about, or believe in, our main protagonists throughout the majority of the film for it to really emotionally resonate with me, and I  wish the narrative jag had been been given more depth as it's a really brave moment and demanded more.

That said, for a film over two hours all that paper over the cracks kept me in my seat through both viewings and many films have me crawling away in 20-minutes. When Belle soars, it really delivers: in the big visuals and dramatic songs and also in the visual nuances and the side characters.

Why not take a moment and enjoy the opening of the film: