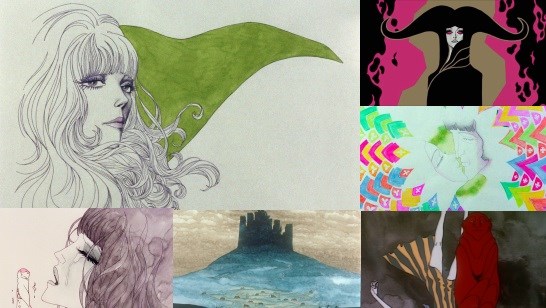 It doesnt take long to start wondering just how much LSD was being used by the makers of Belladonna of Sadness. From the psychedelic visuals and soundtrack you'd have to guess it was a lot, because the film is flat out insane - now, thanks to those crazy cats at Anime Limited, you too can bear witness to one of the most bizarre anime films ever produced.

Jean and Jeanne are a pair of newlyweds in medieval Europe. They approach the lord of the land for his blessing on the marriage but he and his corrupt court demand a huge price. When the pair are unable to pay Jean is thrown out whilst the court engages in the mass rape of Jeanne. Suffering greatly she is rejected by Jean once she is allowed to leave and so Jeanne makes a pact with the devil - portrayed here by a penis with a face - and uses her new power to try and forge a new and better life. She soon finds that her problems are never-ending however, as she deals with the jealous court, superstitious villagers and the greedy devil himself.

Belladonna of Sadness wears it's influences on its sleeve and feels very much an homage of sorts to the exploitation films coming from Europe (particular those of Italy and France). The musical themes and storytelling feel right at home amongst those films, which is a pretty big departure from the direction most anime of the period was going in. It's certainly fascinating to watch the film in this light and makes the film something of a standout in terms of the history of the medium.

There is a potential discussion to be had regarding wether the film can be classed as anime or even as animation at all, as it certainly stretches the limits of that definition. There's no animation at all for almost the first five minutes of the film, and so much of what follows has more in common with the motion comics that have been going around for the past few years than a fully animated work. Most of the film is told through striking watercolour stills with the most minimal of animation, often seeming to comprise of key animation alone with the odd bit of swirling most along the edges. Heck, for the vast majority of the film there aren't even any backgrounds and the images are pretty simplistically drawn.

The thing is though, I'm not sure if you can actually categorise this as an animated film on the same level that you would a Ghibli film. This is an 80 minute work of art, the Blu-ray equivalent of a coffee table artbook. Had it been release in the west more widely at the time of its release I'd say that the film would undeniably have achieved cult status whereas now it's an item of curiosity, a glimpse into a unique vision of the direction that anime could have gone (had the film not flopped on its initial Japanese release) and a representation of a time when anything could potentially be greenlit for production without the need for moe or cute mascots to guarantee merchandise sales. I do also have to say that the big missing element for this film is a commentary track (there are some interviews on-disc with the production staff but these are more anacdotal in nature and and somewhat bizarrely placed - the film's crew are interviewed in an old opticians right next to a main road!) to provide a look at the film from a more academic and historical perspective. Analysing the film on a deeper level would be fascinating, and hopefully this is something Anime Limited might consider of the other works of this type they have on their slate.

What you're ultimately left with here is a fascinating piece of art house cinema that will be great for students of art, media history and animation, but for the rest of us just how much past the first veiwing you maintain your interest is going to vary.

Japanese audio with English subtitles. Extras consist of interviews with the crew, trailers.

7
A striking, bewildering and beautiful artifact of anime history.