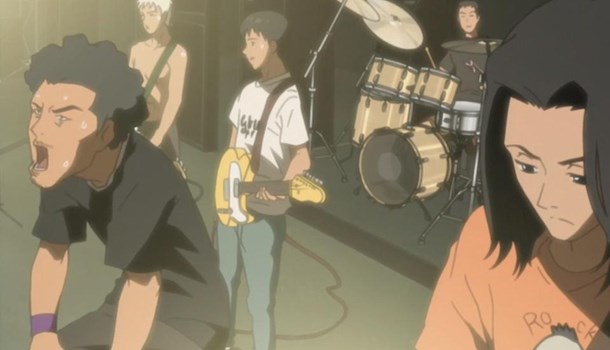 Things are looking up for Beck - despite having made plenty of influential enemies in the music industry, word of mouth and the appearance of celebrities at their gigs is just too irresistible. Though the major labels may be keeping their distance for now, a signing to an Indie label could be just what Beck needs to keep them going. Or it could be a disaster in the making...

As we pass the halfway mark, Beck begins to expand a darker plot that's been bubbling under for the last couple of discs - just where did Rayusuke's guitar really come from, and why is the prospect of it featuring on the cover of one of their albums in America such a problem?

The volume also deals with young Tanaka's graduation and his growth as a person. It's genuinely gratifying to see our lead finally start to mature from the pushover he was to... well, he's still a pushover, but he's gaining some confidence, thanks mostly to his friends. A new romantic interest also complicates things, but then its all part and parcel of growing up.

Beck's an odd anime, in so much as it really isn't in any hurry to get where it's going. I know that the leisurely pace has been too much for some, who had enough around volume 2, but they're missing out. Beck isn't about fast paced action (Revelation have Tsubasa and Full Metal Alchemist to cater to that anyway), Beck is a serious drama that deals with character rather than events, and in that area it does a pretty solid job. There are moments when you want to punch a character for being a muppet, but that kind of emotional reaction just proves the anime is doing the job - depicting realistic characters in a realistic setting, and paced just right to be believable.

The music within the series is of a love it or hate it variety too - by having 2 singers who rotate on each track the band doubles their appeal, but I don't think I'd buy the album.

Animation remains solid if not stellar, and the production quality is about what you'd expect from a modern TV show.

All in, those that stuck with Beck should be enjoying a solid continuation of the show, and with the subplot coming to the fore, we're going to see the pace change substantially by volume 5...

7
A robust anime with some believable characters - but it may just be too staid for some.