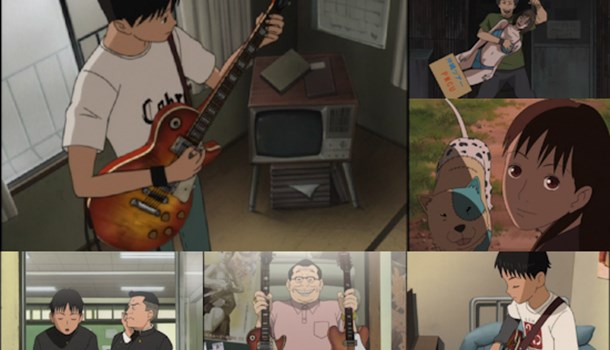 When you're a teenager, the world is your oyster - you can do anything, and achieve any dream you desire. At least, that's how it works on paper, but it certainly doesn't feel that way when you're in the midst of your own teenage maelstrom. Such is the case for Yukio Tanaka, who even at such a tender young age feels like his life is at a dead-end. His academic performance is solid and there's nothing particularly wrong with his life, but by the same token there's nothing that grabs his imagination and gets the blood pumping - instead, he lurches from one interest to the next with no real drive or passion to allow him to see beyond the drudgery of his existence.

All of this is set to change thanks to a chance encounter with Ryusuke Minami - a dashing young man who possesses all of the drive and passion which Yukio lacks. While their first meeting is thanks to Ryusuke's dog - the decidedly unusual looking Beck of the show's title - further moments of serendipity bring them back together and change Yukio's life markedly. Oozing cool, bilingual and with an all-consuming love of music, Ryusuke's infectious personality draws Yukio into a whole new world, setting aside his love for pop idols to immerse himself ravenously in the world of rock, punk, hip-hop and beyond.

With Ryusuke seeking to create one of the greatest bands of all time with the kind of confidence that only comes with youth, Koyuki (as Yukio comes to be known by his growing circle of friends) is drawn into the world of dimly lit bars, grimy live houses, and loud music which becomes the soundtrack to a teenage life filled with the joys and anxiety, love and hatred that you might expect of adolescence.

If you haven't quite fathomed from my harping on about it over previous paragraphs, Beck is ostensibly a wonderfully told story of teenage life. It would have been so easy for a series like this chart a meteoric rise from learning chords in a bedroom to becoming a superstar, but that isn't really what the series is about - this is a story about experiences both good and bad, learning from those experiences and allowing them to shape your personality as you reach towards adulthood. In this sense the series is perfect - Koyuki starts out as a blank slate, and early episodes sees him leaping at anything which comes his way as he tries to find his way out of mediocrity, but it's only his introduction to rock music that really gives him a new drive. In turn, this new-found love leads our protagonist on to so many new discoveries about himself and others, and watching him grow as a character in such a marked yet organic way is a true delight. Anime is no stranger to stories around high school protagonists, but few manage to tell their story in such an evocative way - as someone who hang out with friends who formed a band in my own teenage years, its depictions of those heady days was absolutely on the nose, and even Koyuki's growth born at its core from a new-found love of music reminded me of my own graduation from cheesy pop music to complement it with classic rock and plenty more besides.

All of this is accompanied by a near-impeccable presentation of that coming of age story. Make no mistake, Beck isn't a tour de force of animation - it's a decidedly limited and restrained production for the most part - but what it lacks in eye-popping visuals it more than makes up for with its atmosphere and "vibe". This is particularly notable early in the series, where we see the contrast between clean, neatly organised school classrooms and corridors and the dimly lit, grimy live houses filled with posters, people and movement. The frequent fast cuts between these disparate locations sounds simply, but it's perfect in putting across Koyuki's burgeoning love of music - those dull, restrained school days can't possibly compete with the vibrancy and noise of a busy venue as music blares. Later in the series, we see music festivals and bigger live events treated with equal aplomb - camera angles are used smartly to mimic music videos and live concert footage in a way that seamless avoids putting pressure on the show's animation, which often allows it to punch above its weight in that regard.

In fact, you could say that Beck is a perfect example of how to do a lot with a little. Beck's realistic style fits it like a glove and allows for it to be restrained, only occasionally pushing the envelope to do something memorable - witness Koyuki's hilarious and wonderfully energetic over-the-top bicycle dash to Ryusuke's home late in the series - while also making some surprisingly good use of CG in some concert scenes that fit into its relatively simple style without sticking out like a sore thumb. You could easily imagine Beck as a (far more expensive) live-action production, but this animated treatment serves it very well indeed and gives it plenty of personality between its character design and direction.

It would, of course, be remiss of us not to talk about Beck's music, which is great throughout. Certainly, the show's titular band could do with more songs in their repertoire (you'll hear the same three or so songs a lot over the course of the series), but even this plays into the idea of an upstart new band who don't exactly have an exhaustive catalogue to woo audiences with. Thankfully the tracks that the band do have never really get old, while other rival groups pop up with songs of their own (all the way through to a couple of tracks from The Pillows in the final episode as a closing treat), and there's something to be said for the way songs are written and presented to offer some delineation between new amateur bands and the hardened, more experienced pros who can both create and deliver more complex sounds on stage. These little nuances to the overall presentation really speak to the kind of attention to detail that every element of Beck seems to adhere to - the series feels like a labour of love, and that love is very much appreciated in terms of crafting such a great series.

Before we gush over the series too much, we do have to note a few relatively small niggles. For starters, a story beat surrounding Ryusuke's guitar and its origins feels at odds with much of the rest of the series - although it does play into pivotal parts of the end of the show, it seems like a flight of fancy for a story that is otherwise largely so grounded. The end of Beck is also more than a little frustrating, compressing a notable new era for its titular band into a literal slideshow that should either have been afforded a few episodes of their own or omitted entirely. Speaking of which, I suspect some will be put off by the slow, considered pacing of the show, but not I - yes, it takes its time digging into every development new step in both Koyuki and Beck's progress, but personally I really valued the show's ability to wring every last drop from each scenario and no story beat every outstayed its welcome.

Having finally made it to the UK in its complete form for the first time, there are a few things to note about Anime Limited's release of Beck: Mongolian Chop Squad. Yes, this series is presented in 4:3 as it should be. Yes, it is DVD only (the word on the street is that the existing Blu-ray upscale from Japan looks terrible, and I can believe that given the era and presentation of the show). Otherwise, this release generally looks as good as you'd hope during episodes themselves, with no issues in terms of audio, video or subtitle quality, with the sole exception of its opening (and to a lesser extent ending) credits which look terribly aliased and really rather unattractive. Again, this seems to be an issue with the materials themselves rather than the authoring of these DVDs, so you'll just have to live with it and rest assured that the contents of the show itself doesn't exhibit the same problem.

The series also boasts an excellent English dub, although to be honest I still found myself preferring the original Japanese treatment which is probably the best you'll see - its use of proper English voice actors or Japanese actors with decent English pronunciation serves the show in very good stead, and again there's a realistic feel to this aspect of the presentation to boot. No matter your preference though, you'll be well served here.

I came into Beck: Mongolian Chop Squad with high hopes and expectations of it - its reputation remains undiminished amongst fans, and it's clearly a show that should (with every pun intended) hit all of the right notes for me personally. I think it speaks volumes of the series that even with all of this in mind, it surpassed my expectations by a country mile. Beck is a brilliant series which has a clear vision for and comprehension of its subject matter - it oozes love for music and the act of creating it, and grasps the tumultuous emotions and experiences of teenage life with consummate ease. A couple of mild missteps stop the series from being a perfect 10, but if you've ever found yourself inspired by a song or band then Beck: Mongolian Chop Squad will resonate with you as it carries you along with incredible confidence on its evocative journey of teenage growth and discovery.