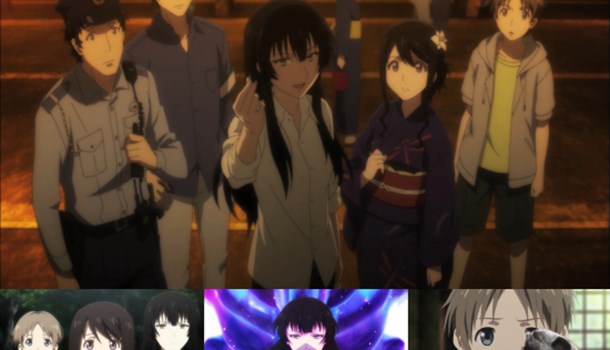 The human body is an incredible thing - in life, of course, but also in death. A corpse might not be able to speak, but what remains can tell us a huge amount about how that person lived, and indeed, how they died. It's this fact that makes forensic pathology such a fascinating science, and also the cornerstone of many a detective drama as we watch someone pull on the rubber gloves and delve into the mysteries held within a recently deceased victim.

This brings us to Beautiful Bones: Sakurako's Investigation, autumn's offering from Troyca (previously involved in the production of Aldnoah Zero) adapted from a series of mystery novels that also go by the English title of A Corpse is Buried Under Sakurako's Feet.

The Sakurako of this series isn't actually a forensic pathologist herself - any knowledge along those lines comes from her uncle who is prominent in this regard - but rather an osteologist; that being a study of bones. In fact, to call her simply an expert in that field would be a massive understatement - Sakurako is absolutely obsessed with finding and collecting bones above all else, and seems to be her sole pleasure in life. Not that she's alone in this endeavour, as our star here has someone managed to persuade a high school boy named Shoutaro to join her on her bone-hunting expeditions. Halfway through the series we're yet to grasp why this odd couple remain in one another's company, but it seems that there's something in Sakurako's past at least that keeps her close to her young assistant.

While many of Sakurako's discoveries are simply animal bones, our titular character also has an alarming knack for coming across corpses of a human variety - an issue for the police, as she's usually unwilling to part with her discovery, but also a boon for them given her sharp eye for getting to the bottom of the cause of their demise. This makes for an obvious focal point for the series - Sakurako discovers a body or skeleton, an investigation occurs, and Sakurako herself pieces together the puzzle to a (usually satisfying) resolution.

However, Beautiful Bones also mixes things up by involves our part-time sleuth in cases involving the living - a little girl found wandering along at night, or a man who believes he's been cursed to an early death, for example. These change up the series in some entertaining ways, providing a broader platform for Sakurako to test out her mind upon that simply a variety of murder mystery situations.

Dig a little deeper (if you'll excuse the pun), and Beautiful Bones is clearly building a deeper story beyond its episodic fare, and it's a series that wears its heart on its sleeve in this respect - the credits begin with the text "A story dedicated to those trapped in the past", and that's exactly what every tale we've seen thus far is. In that regard, episode six is a particularly interesting example, as a story where the assumption is a negative one of a woman who feels trapped by her past, when in truth she is the first example we've seen of someone who has managed to liberate themselves from the dark cloud of their history. Every story so far has revolved around being trapped by the past in some shape or form, and the clear intimation from the opening credits onwards is that Sakurako herself is bound by some past memories from which she can't escape. I for one am looking forward to seeing this delved into more deeply in the second half of the series.

Even without that added layer of depth, this show has an excellent understanding of what makes a good murder-mystery series - its subject matter sets it aside from the "whodunit" style of story where you can make your own guesses as to what has transpired for the most part (unless you're a forensic pathologist yourself, in which case - write in and tell us how accurate the series is!), but it builds up compelling cases and then breaks down the deductions as to what has occurred in an intelligent, fascinating and ultimately satisfying manner. So many shows within this genre of anime tend towards leaning on the supernatural or some other kind of hand-waving, but Beautiful Bones is determined to deal only in facts when push comes to shove, providing a sense of realism that stands it in good stead provided you can ignore just how often Sakurako happens upon corpses or some other kind of trouble over the course of the series. In fact, the closest the show gets to the paranormal is Sakurako's magical girl-esque "transformation" into something "other" when she pulls on her trusty surgical gloves, which does feel a little out of place but at least delineates an episode when it gets to the "science bit".

Perhaps surprisingly for a series with so much grisly subject matter, Beautiful Bones is... well, beautiful from a visual standpoint. The show excels in its detailed environments, well-placed character designs that walk the line between appealing and feeling suitably "real", and lovingly illustrated bones and skeletons that speak to the attention to detail that allows the show to stand out across the board. Coupled with a strong soundtrack and some great opening and closing credit songs, the overall package offered up by the series is most pleasing indeed.

While its lack of high-level drama or action won't appeal to everyone, Beautiful Bones: Sakurako's Investigation is something that I personally have been crying out for for what seems like forever - a mystery series that can stand on its own merits without resorting to the supernatural to get the job done. Essentially, what we're left with is an anime equivalent of Silent Witness, albeit one with a keen eye beyond the crime procedural genre. The result is a triumph - intelligent, beautifully presented, and engaging in every way. It's a series that has had me glued to its every move like no other show this autumn so far, and if it can bring its broader topics to bear around its cast in the second half of the series this could be one of the year's most commendable shows.

You can currently watch Beautiful Bones: Sakurako's Investigation in streaming form on Crunchyroll.

9
Anime has been crying out for a mature, intelligent mystery series for some time, and this could be just the show we've been looking for.
LATEST REVIEWS