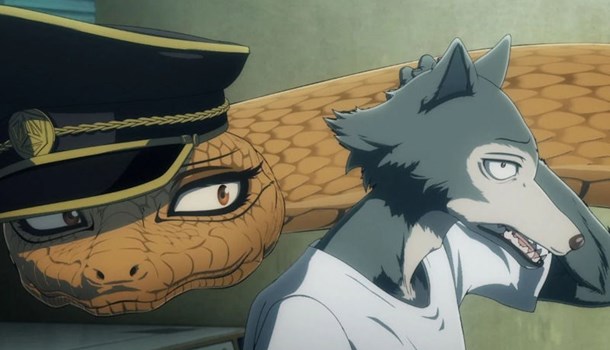 Picking up right where we left off with the last season, the mystery of who killed hapless alpaca Tem remains unresolved, Legoshi hasn't reconciled his feelings for his rabbit crush Haru and tensions between herbivores and carnivores continue to increase, culminating in the threat of segregation. With the school's top pupil Louis abandoning his studies to take control of the criminal organisation, the Shishigami, the theme is very much one of unsettled revolution.

I was disappointed to see the stop-motion intro go, the replacement is fine, but nowhere near as striking. Similarly, the show seems to have slowed down, becoming very noir in tone. Legoshi continues to search for the killer, his voiceovers sounding very Sam Spade as he uses his particular beastial talents to piece the clues together.

Without giving away too much, the investigation does lead to a satisfying conclusion, with the supporting cast providing an able sounding wall for the main characters. What did surprise me was the lack of Haru in this season - aside from a few conversations scattered throughout the show, she's not really an active force in events this time around. Legoshi continues to train himself to grow stronger without meat, and even moonlights as a vigilante bringing bloodthirsty carnivores into a backstreet doctor for treatment. All this he does for Haru, but the rabbit herself takes no active role.

You'll need a lot of patience to get the most from the show. There's plenty of long monologues and introspection that take their time to unravel, but it's magnificently moody and beautiful to look at. Some of the animation is stunning - there's a moment where two characters dance together, and it looks so real that I had to rewind and watch again to see if there was any visible visual trickery, but no it's just stunning animation.

The themes of the show might at first seem pro-Vegan, but the show actually deals with the subject rather deftly by the end. There's a real weight to the philosophy of the BEASTARS world, and it really isn't a show that lends itself to casual watching.

By the time things have wrapped up, the show has turned a corner but not without consequences. Everyone is left visibly and emotionally scarred, a testament to the traumatic events that lead us to the next chapter in the BEASTARS saga. The manga continues well beyond the end of the show, so it was little surprise that Netflix and Studio Orange announced a Season 3 on the 20th July this year.

A show for those with patience then, but ultimately a rewarding watch if you give BEASTARS the time and space it needs to tell it's own unique story.

8
A slow burn drama that examines its rich world in great detail - not for everyone but those with patience will find much to enjoy.