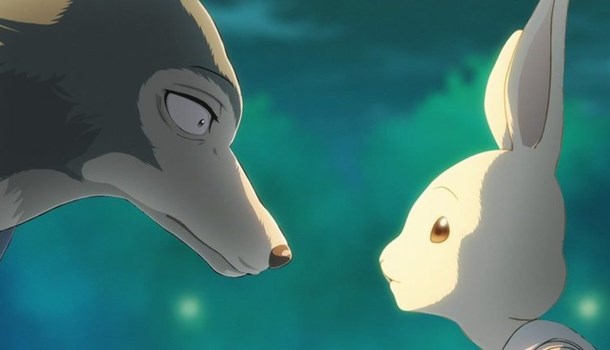 I covered the first episode of this series on my blog, and the second I'd written it up I was on to episode 2. Safe to say I enjoyed the world I'd been introduced to, but could it keep my interest over 12 episodes?

Set in a world populated by different species living together and able to speak(yes, think Zootopia), herbovores and carnivores must co-exist and live in peace. Students live behind school walls before they are allowed to join society fully, and it's at Cherryton High that things take their first dark turn. An Alpaca named Tem is murdered by an unkown assailant on school grounds, and from here we meet one of Tem's friends and fellow theatre club member Legosi,a sombre and introspective grey wolf stuggling with his instincts.

Also at the school is a young white dwarf rabbit named Haru, who has her own struggles with identity. Scornful of being "protected" by stronger animals, she's also bullied remorselessly by other girls for her promiscuous ways. (I have to say the way she baits them doesn't help).

The unlikely couple first meet in unfortunate circumstances; Legosi encounters her sent and becomes feral, chasing her down, stopping at the point of the kill and simply holding her, before disappearing unseen into the night.

It's a gripping opener, and by the time episode 2 rolls around, we take a deeper dive into the school and its community.

Both of our central characters have deep psychological issues, some defined by their circumstances (Legosi is naturally shy, Haru uses sex as a way to feel validated as an equal) and others by their immutable characteristics as hunter and prey. This latter conflict is what provides the show with its more compelling edge, an extra layer of adversity for our characters to overcome, if they even can.

For a 12 episode series, a lot of time and effort is taken to round out the cast. There's the sort of humour you might expect (a mouse as editor of the school paper ordering around much larger animals for example) and the tone shifts gears effortlessly from humour, drama and horror, largely thanks to the unlikely nature of the show. Yes, it takes an idea Disney ran with to great success, but I'd argue that this is a darker and ultimately more satisfying ride as we get more time to explore the world these characters inhabit.

For example, the Black Market is a secret gathering that serves meat to carnivores, though it's generally obtained from the terminally ill and not via hunting or farming. It's a nice detail, and though only briefly observed, it makes sense in a world where instincts of predators must be going nuts surrounded by so much prey.

I won't go into spoilers, but there's a wonderful sting at the end of the series, before the screen fades confirming a season 2. The first-person nature of the encounter only reinforces just how good the direction of this show is. Bravo Shinichi Matsumi.

A note also to the cast, in particular Jonah Scott as Legosi, giving a solid performance as an introvert who has to carry much of the story through narration, and Lara Jil Miller as Haru, who manages to seem sassy and vulnerable at the same time.  I note she hasn't had many major roles in voice overs, mostly supporting roles, so I hope she gets more work off the back of this series, it's certainly deserved.

Before I conclude my thoughts on a show that I think, by now, you'll have gathered I enjoyed enormously, let's talk about that fabulous intro.

The opener to this show is fully stop motion using puppets, with a wonderful jazz/pop track (Wild Side by ALI) playing over the top - the track wouldn't sound out of place on a Cowboy Bebop soundtrack. It's so good that TOHO put a clean clip of it on their Youtube channel, which I've embedded below for you to enjoy. Honestly, it's just wonderful.

So in conclusion, the show delivers on its premise by taking time to deliver a well scripted story, complete with twists and turns, secrets and lies, and a culture all of its own. It's an utterly absorbing watch and I really can't recommend it highly enough.

10
Whimsical but deliciously dark in places, this is teen drama with added bite.