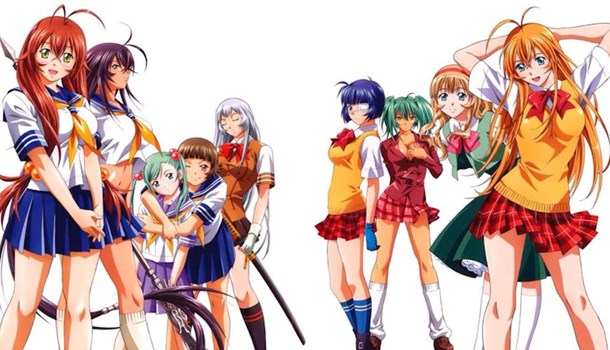 If Battle Vixens (aka Ikki Tousen) has one redeeming feature it must be the cheese factor.
The fights are cheesey; the way our heroine loses much of her clothing in every episode is cheesy; the way the girls chests bounce all over the place is cheesey; everything is cheesey. There's more cheese on this DVD than in the whole of Wensleydale.

Now a little cheese every now and again is fine by me. But everyone knows that too much cheese before you go to bed can give you nightmares. Similarly, Ikki Tousen is filled with so much cheese that you may feel as though you are trapped in some horrible nightmare that only a press of the stop button can end - but somehow you can't quite reach it... You're going to remain trapped in your seat until the end by that small piece of your brain that can't help but wonder if the next episode is going to be even worse.

The history to the series is given to us by a narrator. In his rather ominous voice he tells us that the spirits of centuries dead Japanese warriors are passed on through the ages to new fighters who must share their fate. These new fighters all carry a coloured bead, which sort of looks like a figure six shape, to identify themselves. No longer do armoured samurai and armies sweep across the Kanto plain though.
Now we have high school kids battling each other and rival schools for supremacy.

Not a plot born of genius but enough for an average fighting anime certainly. Indeed there are nods to the sort of plot and conspiracies that I'd normally associate with other teen fighting anime like Flame of Recca but once again there's that lingering aroma of cheese...

The animation is quite reasonable with no flashy CG everywhere. Sound effects are numerous but not quite at the Xena level where people make "whoosh" noises every time they turn around. I consider the voice acting for the english version to sound just as good as the japanese, however that's mainly because I think they both sound cheap and hurried.

The DVD disc comes with a few extras but nothing exceptional We get a very short gallery of character designs and a couple of trailers. The only real interest comes from the fake out-take reel where we get an opportunity to hear what the voice actors/narrator really wanted to say for certain scenes. Mild amusement at best though. The full release edition will come with an artbox and a copy of the first volume of the manga, bumping up the value for money.

4
Watch it if you've never seen Agent Aika or you feel the need to be amused by panty flashes galore.
LATEST REVIEWS