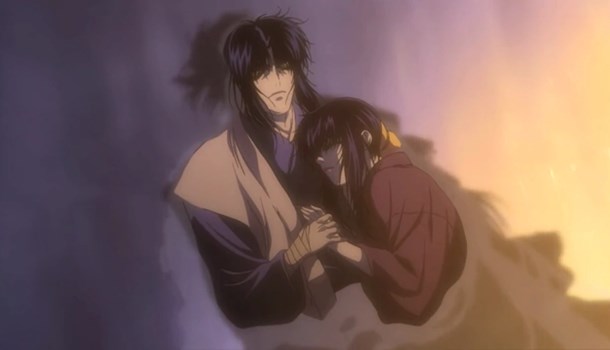 It was only a month ago that Ross was grumbling about being bored of always having to review the ‘period’ stuff. So having gorged myself on a healthy dose of cyber-crime conspiracies, mechs and inter-dimensional time travellers recently, I felt like checking out studio Gonzo’s outing into feudal Japan, Basilisk.

So what do we have here? Well, Basilisk is set during the early period of the Tokugawa shogunate in 1614. With the aging ruler, Tokugawa Ieyasu, kicking on a bit, two of his grandsons are positioning themselves against each other to take over as Shogun. To resolve this family feud, Ieyasu summons two rival ninja clans, the Kouga and the Iga, to represent his grandsons and instructs them to select ten ninja each who will battle to the death. The clan that comes out on top will decide the outcome of the next Tokugawa shogunate. There’s one problem though, two of the ninja from the rival clans are in love! Oh dear…

The attention to historic detail, as far as the setting and political climate goes, is a nice touch but that’s where the reality check stops. The fantastical, monster-like designs of some of the ninja and the outlandish techniques they employ will almost certainly bring the likes of Ninja Scroll to mind and you wouldn’t be wrong. It’s all been seen before but nevertheless, Basilisk is actually great fun to watch because what it does, it does very well. From the opening scene it’s clear that it’s intended to be a visual assault on the eyes, and it is just that! Combining a perfect balance between traditional drawing and CGI, the animation is beautiful throughout. Probably one of the best you’re likely to see at the moment at any rate.

As far as the story goes, events are centred round the two characters in love; Oboro from clan Iga and Gennosuke from clan Kouga. There wasn’t a happy ending in Romeo & Juliet and it’s doubtful that we’ll get one here but you’re not watching Basilisk for its’ happy endings are you! No, this is about the action. Unfortunately, where there’s scene after scene of spectacular ninja battles, there’s also an abundance of two-dimensional characters. Oboro is completely weak, totally devoid of any kind of a spine and spends most of the volume gushing over Gennosuke. But she looks pretty and that’s the important thing. He, on the other hand, holds futile dreams of peace between the two clans and presents himself courteously with everyone he meets. Everyone else just comes across as hate-filled warriors that want nothing more than to split apart members of the other clan. That’s all very well and good for what it is, but don’t expect to get too attached to any of the characters. The problem is, will gorgeous action scenes be enough to keep you interested as the series progresses? Probably, if you’re just looking for an excellent action fix.

Don’t mistake me though, I found the four episodes in this volume thoroughly enjoyable and it’s still early days yet for this 24 episode series. Just be sure to set your expectations accordingly.

For my part, I’ll certainly be checking out the next volume.

History of the Ninja: A short paragraph on the origins of Ninjitsu in Japan.
American character casting auditions.
Director/Actor commentary for episode 3.
Textless opening/ending credit music.
Trailers for Ah! My Goddess and Saiyuki Reload.

7
Stunning animation and action. It’s just let down a bit by some un-engaging characters and a predictable story.
LATEST REVIEWS