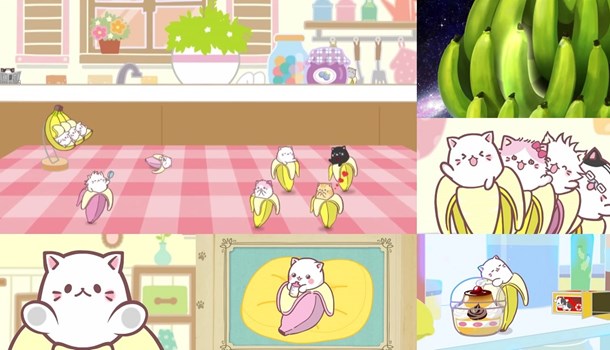 Space! Bananas! Cats! Thus starts Bananya, an anime about a cat living inside a banana.

An unseen narrator reveals a secret about bananas nobody knows: when humans are away, Bananya comes out of his banana peel to play. However, the tiny kitty never entirely leaves his banana; only his upper half pops out of the banana peel, leaving its lower half a mystery. Donning a banana peel as pants, Bananya doesn't walk - instead, he hops everywhere, while also proving capable of jumping remarkably high.

The only thing cuter than Bananya is a dozen more Bananyas. In episode two, the narrator discloses that after many years of research, he discovered many more creatures hidden away from humans. Viewers are introduced to Bananya's catty companions such as Tabby Bananya, Long-haired Bananya, Baby Bananya and Bananya-ko, all living inside bananas.

The series revolves around the adventures of the fruity felines. Targeted at a young audience, these adventures are simple and short – from watching TV to meeting a mouse to exploring the contents of a refrigerator. The Bananyas vocabularies are solely limited to meowing, while the narrator describes the activities of the Bananyas in an uncomplicated and easy to follow way for its junior spectators.

After three minutes of hopping and meowing, each episode concludes with a Bananya Identification Guide where viewers learn more about individual Bananyas. For example, main character Bananya is revealed to like sweet treats, and his dream is to become a fancy chocolate-covered banana.

Despite the cats in bananas confined to only meowing, the voice cast consists of surprisingly high-profile voice actors. Yuki Kaji, known for voicing characters in Attack on Titan, Blue Exorcist and Fairy Tail just to name a few, voices main character Bananya and four of his feline friends. Ayumu Murase, who lend his voice for hits such as Parasyte, My Teen Romantic Comedy SNAFU and From The New World, provides the voice for five other Bananyas. Actor, cartoonist and TV personality Yoshikazu Ebisu took on the role as narrator, guiding viewers through the wonderful world of Bananya.
Regardless of the overall simplicity and basic language, both the narration and many meows are delivered with emotion and are amusing to listen to.

Similar to the theme, the art style is simple. Hailing from a country where cute is a prominent aspect of popular culture, no cuteness is spared in the Bananyas character design. With a bright colour palate and smooth animation, the series easily captivates young viewers. That isn't to say adults can't enjoy this anime however; the light-hearted, often funny and incredibly cute series can be enjoyed by all ages.

You can currently watch Bananya in streaming form on Crunchyroll.

8
These banana-donning cats will melt the hearts of young and old.
LATEST REVIEWS