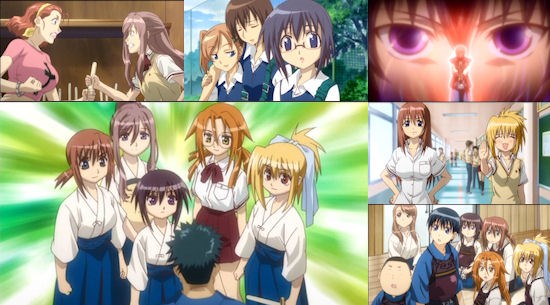 Although much of its opening half was focused on engaging in simple yet enjoyable fun and frolics, those first thirteen episodes of Bamboo Blade did nonetheless set up at least one major plot point for the second half of the series to explore in the form of teacher Kojiro's impending forced resignation at the end of the school year - a problem which it seems can only be resolved by him redeeming himself in the eyes of the principle by leading the kendo club in his charge to a tournament victory of some kind.

However, you'd be hard-pressed to believe that this is a big deal at all as this second, two-disc release of Bamboo Blade kicks off.  Even though it begins to throw some pretty important problems at certain characters, most notably Kirino in the first instance, it still does this with a light touch for most of these episode that ensures such crises don't interfere with the sense of fun that pervades the series - for better or worse, depending on your take on the show's frequently bright and sunny outlook.

Still, as we move through the series most of the girls of the kendo club get to enjoy some time in the spotlight - Satori Azuma finally joins their ranks courtesy of Miyazaki, beginning an odd bond between the two that holds firm throughout the rest of the series, and Tamaki in particular finds herself the centre of attention for large portions of these episodes as she finds both a new friend and rival in Rin Suzuki.  Indeed, it isn't only Tamaki who suddenly finds herself with a worthy foe in the kendo arena, which allows part two of Bamboo Blade to actually focus on kendo itself a little more for dramatic, character-building or occasionally comic effect.  This is pulled off rather well throughout these two discs, leaving you wondering why it didn't get heavier use in its first half, but nonetheless it makes for a far more compelling overall viewing experience that leverages the show's concept to its fullest extent.

All of this focus on character and the show's various individuals finally pay off as we reach the climax of the series, a surprisingly heart-rending affair which borders on the outright tear-jerking for a while as the future of the kendo team and the happiness of its members are thrown into doubt.  It's at this point that you realise that Bamboo Blade has really "done a number" on you - for all of those episodes of light and fluffy enjoyment, the series had actually been building up a kinship of sorts between viewer and kendo club throughout, leaving you feeling like you've just been thrown under a bus when this happiness and friendship looks set to disintegrate.  It makes for an unexpected yet fascinating climax to the series which elevates it above being "just a bit of fun" into something with far more heart than just that at the end of the day.

Overall then, Bamboo Blade as a whole is a successful blending of sports anime (to a limited extent) and enjoyable slice of life goings-on helped along by AIC's colourful, polished artwork and character designs.  As far as this UK release from Manga Entertainment goes, its video is a little bit soft for my liking but the discs are otherwise error-free and with decent sound and visual quality to make for an eminently watchable (if bereft of extras) offering.

The slice of genre isn't for everyone, and some anime fans will be left wishing that this series aimed for more intense drama or spectacular action, but if you're after a more cheerful character-driven affair that can make you laugh and yet still tug at your heart-strings when it really needs to then Bamboo Blade is an expertly-crafted affair that proves itself capable of doing just that.

English 5.1 and Japanese 2.0 audio with English subtitles.  The only extras on show here are textless opening and ending credits, as per part one.

8
The kendo-centric entertainment continues where part one left off, but Bamboo Blade's second half adds more emotion and action to its already enjoyable arsenal.
LATEST REVIEWS