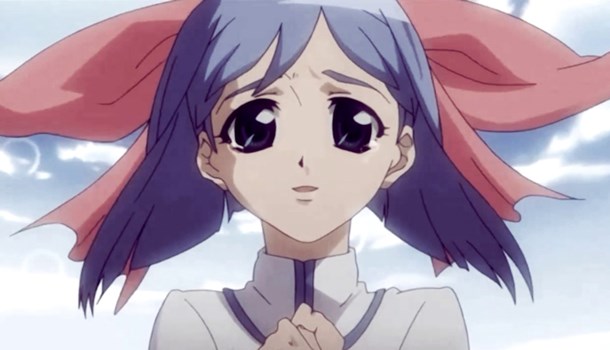 Baldr Force Exe started life as a Dreamcast shooter, which proved popular enough to justify this 4-part OAV. The story takes place in a future where humanity has created a better world within the Wired - an online hub where anything is possible and the only limit is your imagination. This leaves the real world in a bit of a mess, and subsequently hacker groups have emerged who take on contract jobs to make a living. One such group is Steppen Wolf, of which our main protagonist, Souma Toru, is a member.

The series starts with the usual "job-gone-bad" routine, and it's not long before Steppen Wolf are captured, with Toru forced into service by the military organisation FLAK - this suits his purposes as he knows one of his unit killed his best friend in their last caper, and he's out for revenge.

With the entire saga on one disc, the pace is pretty fast. We find Toru moving from one organisation to another in each episode, and as such it becomes a bit difficult to create any real empathy with the characters, but as a side effect it makes it hard to tell who the good guys are, which works in the series' favour - the constant guess-work is one of the main attractions here.

The series doesn't pull any punches either - there's a very detailed virtual rape scene, exploding heads, murder and some nudity - how this gained a 15 certificate is totally beyond me.

The music is better than average, though the opening theme seemed to be a pretty close clone of Gundam SEED's first opening ditty, but it's still pretty good regardless. (Hell, if you're going to steal, get the good stuff!). The animation is crisp and the CGI isn't bad either - as a relatively recent release (2006-2007) it benefits from some solid production values. The very attractive character designs don't hurt either, though the mecha does look very much like a riff on Virtual-On.

The story itself is the biggest problem. It really has nothing new to say, and borrows elements from everything from GunXSword and .HACK to The Matrix, and without a new spin or ideas of its own, the series quickly becomes mired in ticking boxes - evil organisation, underground rebels, death inside the Wired = death in the real world, mecha... if you're expecting it, it'll be along shortly.

As a standalone disc this is good value for money - despite the RRP it's been advertised at around £8.99, and if you can stomach the violence and the slightly insensitive virtual raping, then it might be worth a shot. For those with more discerning tastes, it's probably not for you.

6
Brash, a bit offensive and somewhat lacking in new ideas, this is a competent albeit shallow release.