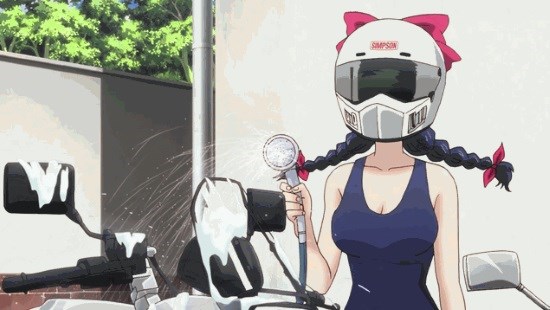 Shows like Bakuon!! (the exclamation points are important) are why I love anime so much. Sure, the perception of the genre to much of the world is shirtless men screaming and shooting lasers out of their fists (or women shooting them from....other places - Ed), but then you get a series like this that embrace the sheer impossibility of high school girls trying to find common ground together.

Bakuon!! carries on the grand tradition in anime of turning a single aspect of life into an all-encompassing thing. In this case, the entire cast is obsessed with motorcycles with the kind of fervour that is usually reserved for video games and religion. They argue frequently about which brands of bikes are the best and promise to inflict both physical and emotional pain upon anyone who disagrees. However, they eventually find peace in the universal truth that motorcycles are freaking rad.

The show revolves around a group of girls setting up a school club for getting their licenses and driving their motorcycles around town. Hane, who starts the show by making “vroom vroom” noises on her bicycle, tackles everything with the endless enthusiasm and ignorance of your standard anime protagonist, complete with not understanding that the different classes of license refer to the size of the motor rather than the rider’s cup size. I swear this is a legit misunderstanding she has, and not for just a scene for a cheap laugh. The joke goes on across a couple of episodes.

As you might expect from this sort of joke, the show throws a bit of fan service at you from time to time, which feels out of place when the themes it wants to project are surprisingly wholesome. Like most teenagers, these girls are craving the freedom and independence that comes with being able to drive yourself around rather than rely on your parents as a taxi service. Motorcycles represent teenage rebellion in almost every culture and its good to see a take on it that isn’t all biker gangs and drag racing. I mean, both of these things are referenced but neither is the sole focus. It’s a fun, relatable subject and at times it is handled fairly well. Its just that occasionally, and I never thought I’d say this, the jiggling becomes a bit of a distraction.

The cast stays fairly small throughout the series, focusing on the interactions between the official and unofficial members of the motorcycle club. There is Rin, the Suzuki fangirl who often sports a tight fitting racing suit when she rides, Onsa, the one responsible for setting up the club and introducing Hane to the wonders of motorcycling, and Raimu, who is an incredibly skilled rider who never speaks and is always wearing her racing helmet, like a Japanese schoolgirl Stig (which is an image I didn’t know I needed in my head). The most entertaining of these characters is Hijiri, who sees motorcycles as a path toward rebellion, often exclaiming that she is now a delinquent with a strange delight. She is woefully good and polite, however, often failing at her rebellions in favour of being nice to everyone around her. She is often driving around in the sidecar of her motorcycle as her family’s servant takes control until she manages to get her full license.

The animation is solid throughout the series, with the sense of motion and speed that comes with a show exclusively about motorcycles. There are some fantastic details in the design and presentation of the motorcycles which add a sense of realism that shows about vehicles can lack at times. There are some dodgy CGI moments mixed in but they are sparing and not enough to cause much of a problem. The music captures the energy of the subject matter, particularly the opening theme, FeelXAlive by Sayaka Sasaki, which feels like a JPOP take on California rock, evoking my youth of lying on the beach without a care in the world. The soundtrack itself is surprisingly diverse, including rock, punk and ska inspired songs, making it one of my favourite parts of the three disc DVD set.

The show has a fun tone and, if you enjoy stories about high school girls becoming friends and can get past the copious fanservice, then Bakuon!! has a lot to enjoy. Solid animation. Interesting characters. A cute, light story to get your teeth into. Plus, motorcycles are, and will remain, freaking rad.

Clean opening and closing sequences, TV promos, and some behind the scenes footage of the directors getting reference footage of the motorcycles featured in the show.

7
All revved up and heading to school.