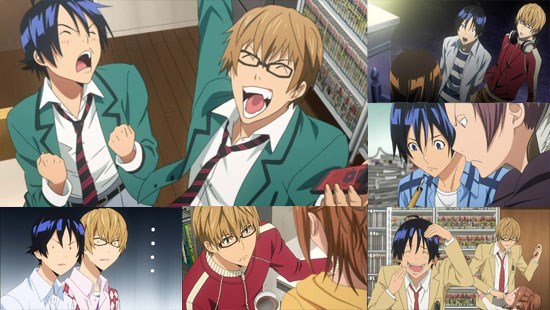 I have a lot of love for the Bakuman manga, and will happily bounce around the living room whenever the opportunity to read the next volume that hits the doormat arises. S,o saying that I could watch the saga unfold in anime... well that was too good of an opportunity to pass up. But can a complex and densely text-heavy manga translate to anime?

Bakuman follows Moritaka Mashiro and Akito Takagi as they start their careers in the manga industry, hoping to get their works published in the popular Shōnen Jack (the show's equivalent of Weekly Shōnen Jump). After a whirlwind of love confessions, marriage proposals and a look at how manga is produced, Bakuman sees the early stages of this struggle as the duo try their best to get a series in the magazine.

The original Bakuman manga is from the same team as Death Note, but that is where the relation between the two series ends. Bakuman is a very different type of manga that still retains some of the trademarks that the creative duo are known for, like complex and dialogue-heavy stories as well as some beautiful looking art and detail. These two things can be quite hard to translate into anime, especially with episode time constraints as well as budgetary ones when concerning animation. For the most part, the anime does pretty well in both of these - while the animation is not as highly detailed as the manga (mainly as that would be very hard to do), it is still a fantastic world to look at and the characters look like they have jumped straight out of the manga itself. The series does follow the manga down to the panel in some cases, meaning that a fair chunk of the dialogue is still present, which is both good and bad; good because some of the insights into how the manga industry works are great, and bad because explanations can become overly long and complex to the point that you can actually lose the point of the occurrence being explained.

This will be the last time I reference Death Note in this review, but personally for me the anime adaptation of that series was too closely in keeping with the original manga. If you read the manga before watching the series, all the major twists and turns were already laid out for you already. There was nothing new to surprise you and unfortunately Bakuman has a similar issue - if you are coming fresh into Bakuman, then this is a non-issue but for those coming in from the manga then there may not be much here to enjoy. However in saying that, and with the manga reaching the end of its run here in the west, actually watching the anime from the start is actually quite nice - taking us back to see where Mashiro and Takagi first started and going from this back to the manga, it’s actually fantastic to see how far they have come. It could be argued that the series can be slow to get going and to an extent that can be true, but I like to thing that to a degree - it is looking at the creation process for coming up with a manga that works within the format of a magazine. It’s not all just wasted time and looks at how people deal with writer’s block and even making ends meet while they are looking to create the next big hit.

So, enough with the anime/manga comparison - how does the anime actually hold up when viewed on it’s own?  Bakuman is an odd hybrid of a slice-of-life show mixed with a look at the manga industry. From the description, Bakuman seems like a fairly dull setting, but I suppose that is the magic about the series; it can make the manga industry production process interesting, as well as giving a snap-shot of how invested manga creators can be and have to be in order to make a full-time career out of it. I’ve found this to be incredibly entertaining, especially when imagining the original Bakuman creators (a duo themselves) having this kind of drive. If anything I would love to think that Bakuman is in a way an autobiography of the creators themselves.

This, of course, wouldn’t be a slice-of-life anime without some sort of a character drama and this comes in the form of Mashiro’s love interest Miho, with the pair promising to marry each other once their respective career dreams have come true.  With Bakuman feeling like more of a realistic anime, this kind of relationship through e-mails is somewhat unrealistic and can break the flow of the series, alhough to be fair this is more prominent early on, especially as Miho becomes more of a supporting character. If anything, it is the relationship between Mashiro and Takagi as they look to find their feet as creators that really shines through. The latter half of the series explores the stresses of this kind of working relationship and how, if partners do not have a working chemistry and passion, it can be hard to be creative together. This is where Bakuman excels, showing real people acting realistically (most of the time) to situations that normal people have to deal with.

The anime transfer itself is the usual high quality we have come to expect - one thing to remember is that Bakuman is a subtitle-only DVD, so there is no English dub. There are also a handful of subtitles that have grammar and spelling errors, which for the most part are just oddities rather than being complete deal-breakers. The collection is the complete first series, so you are getting twenty-five episodes across six discs, which for the price is a good deal.

Who would I recommend Bakuman to? Those who are looking for something a little more grounded and have a healthy interest in the manga industry, though having both is not really needed. I came into Bakuman hot off of Death Note (Damn, mentioned it again!) and this is a completely different beast which may turn off some, but it has the same feel and magic that supernatural thriller had. Those who have read the manga will find nothing new here, but like me you may enjoy the opening episodes and how it all began again. I couldn’t recommend Bakuman any harder, and look forward to the appearance of the remaining two series in the UK.

Update: Since the review went live, it was brought to our attention that the subtitles were in a much worse state that we had originally thought. After going back over the review discs and checking again we have come away with the same conclusion. We can only guess that the issues have come from the translating from French into English rather than directly from the Japanese. It is apparent that the final text has not been accurately checked, with some major grammar and spelling issues, not to mention snippets of French left in the subtitles. This being a subtitle-only release with no option for a English dub, these issues become even more noticeable and unfortunately drags down our overall impression of the series. Bakuman is a fantastic series and there is still plenty of entertainment to be had from this release. However, the sloppy translation and subtitling puts a damper on this otherwise fine release. We can only hope that, should the other two series be released, the mastering process is greatly improved.

Japanese stereo audio with English subtitles.  Extra consist of clean opening and closing credits, as well as opening credits for some of the in-series anime titles which appear throughout the show.