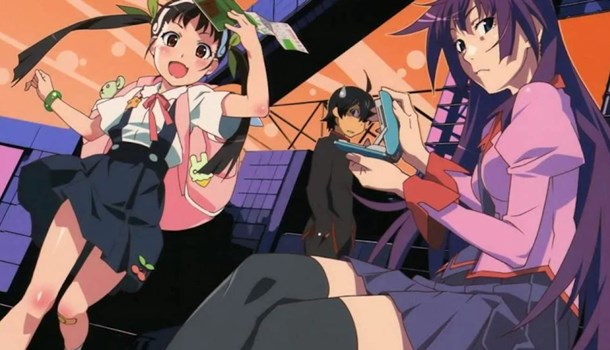 So, a month on and Bakemonogatari returns to the new release shelf just in time for the third series to start streaming to the UK via Daisuki, along with the franchise's OVA and the second series, ahead of its release from MVM Entertainment later this year. But after watching the latter half of season one, will you have the will to go on for more or will an apparition have stolen away the heart of the show?

Picking up at the end of Kanbaru’s arc from the last season, we’re straight back into the thick of it with the introduction of an old friend of Araragi’s sisters, Nadeko, who is having a little snake problem. Following this we launch pretty much straight into the five episode final arc featuring Araragi’s friend Hanekawa who is starting to have a few problems of her nyan.

In other words, things haven’t changed a bit on the surface and that’s largely excellent news. Nadeko’s arc in particular is brilliantly paced, bouncing from exposition to the show's most daring fan-service yet (at least until you’ve seen the live-action opening to Hanekawa’s arc anyway – not really one for the kiddies this series in case you hadn’t figured it out yet folks), to a great, dynamic action sequence at the finale. Hanekawa’s arc in contrast is more of a lengthy affair and honestly suffers from the same issues as Hachikuji’s arc from part one. It runs very long and whilst there’s a lot of exposition to get through and it’s jam-packed with great sequences and ideas, it’s very much outstayed its welcome by the time the credits roll for the last time.

Somewhat bizarrely though, the arc also contains what’s probably the best episode of the series despite nothing within it having any direct bearing on the rest of the arc. Araragi and Senjōgahara’s first date is told brilliantly - it’s awkward and hilarious and is full of brilliantly emotive pieces from the two having a quiet moment to speak their true feelings to one another to the inspired decision to allow the two to have their first kiss off-camera. It does, however, also serve to highlight the fact that the rest of this half-series does suffer somewhat from Senjōgahara’s absence. Araragi’s relationship with her is the heart of the show and also its best source of comedy (including some great fourth wall-breaking gags) so it would have been nice to see her continue to play a much larger role than she’s given here.

On a technical level, as you’d expect, nothing has changed from part one and whilst I gushed extensively about this aspect of the series in my previous review it would be remiss of me not to take the opportunity to do so again! Right from the first episode on the disc I was utterly blown away as I was reminded just how good this series looks. From an intricately detailed book shop to a bamboo forest that’s so deceptively simple in appearance yet so utterly engrossing (memo to James Cameron – SHAFT can do immersive in animation, let alone your fancy waste-of-money 3D!) it is frankly the best looking show around; never mind anime, this is easily able to compete with the best of today’s big-budget live action shows for visuals. Let’s not forget that this is coming from a series from 2009 (albeit one that had the traditional SHAFT ‘clean-up’ between the TV and home release)!

The music is still great too, with no less than three new opening themes - this time around each is complete with new animated sequences (including the aforementioned super-fan-service-friendly ones for Hanekawa’s arc). The background music very much becomes part of the background and is often totally unnoticeable until you realise that something is building tension and it’s not anything that the characters are saying. For dub fans I’m afraid you’ll still be left wanting here with no English language audio option available to you, but the Japanese cast are still on form here. It doesn’t quite reach the heights that the cast of other recent releases like Tiger & Bunny or Blood-C manage, but it does come close.

If I were forced to draw a comparison between the two halves of the series (which I suppose I am given that this is a review and all...) I would have to say that this half isn’t quite as strong. The final arc’s length and the mostly-absent Senjōgahara are niggles to be sure, but they are there and the latter in particular is a hole which nothing ever really manages to step in and fill. Still, it’s certainly not causing any real harm to the series and I’m certainly not going to be stopped from replacing the review copies with the real deal at the earliest opportunity (or obsessively refreshing Daisuki till the streams go up). In a year that already been packed with a huge number of strong releases, this is one of the strongest and MVM Entertainment is to be praised for taking the gamble of putting it out there!

9
Everything the hype said it would be and more!