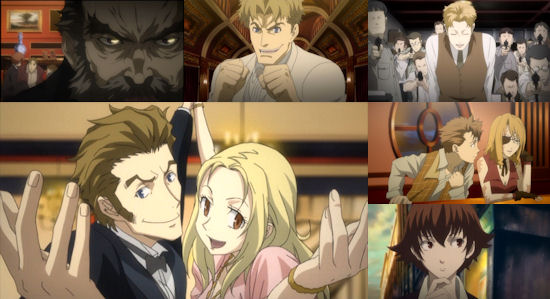 If you enjoyed Crunchyroll's streaming coverage of Durarara earlier this year, then you'll probably be more than a little pleased to know that this isn't author Ryohgo Narita's first light novel series to gain an anime adaptation.  Instead that title goes to Baccano, a series first broadcast in Japan back in mid-2007 which united Narita with the Brain's Base animation studio to much acclaim.  Now, Manga Entertainment brings this series in its entirety to the UK, spanning four discs in a single release to allow you to enjoy the series in all its multi-layered glory.

While Durarara enjoyed a very modern present day setting, Baccano focuses much of its story upon 1930s America, starting out with an episode that playfully discusses and toys with the very premise of the series as we join a conversation about who is the central character of the tale about to be woven.  From the opening credits of the series alone you'll know that this isn't a simple question to answer, as it throws countless characters at the screen in a stylish blur of information.  As that introduction gives way to the start of the series proper, you'd be forgiven for being confused and even put off by the complicated barrage of characters who hit your screen in a blitz of scenes and conversation which seem to be incredibly important yet make little sense at that point in time.

With a little patience and perseverance however, things slowly start to become clearer as much of the main body of the story centres upon the Flying Pussyfoot, a cross-country train which becomes the object of interest for numerous groups from Mafia gangsters to some even less savoury individuals.  This train becomes quite literally a vehicle for the various side-stories which sprout from the mass of characters on-board, taking us on a journey of immortality and immorality which is frequently violent and gory to the extreme - Baccano is certainly not a show for the faint-hearted, that's for sure.

These various stories come via trips back into the past (be it immediate or distant) of the various characters, which gives the show plenty of texture and depth, dragging us all the way back to a galleon in the year 1711 for one episode while following the light-hearted Bonnie and Clyde-esque japes of daft couple Isaac and Miria the next.  Just when it seems as though the series has created so many story threads that it couldn't possibly hope to resolve them all in a satisfactory way, so the story defies your cynicism by not just closing up most of these plot points but also welding them back together masterfully in the aftermath of the events aboard the Flying Pussyfoot.

As well as the main thirteen episode series itself, Manga Entertainment's release also bolts the show's three-episode OVA on to the end of the series, giving us an extra story to enjoy which adds a little more to proceedings while also introducing yet another entertaining new character.

Speaking of the specifics of this UK DVD release, the only real disappointment is with regard to its video quality, which is overly grainy throughout, although thankfully never too distractingly so.  That aside, audio quality is solid (complete with a half-decent dub), and each of the four discs feature a US audio commentary to add a little more entertainment to proceedings.

Overall, Baccano is an impressive demonstration of its very particular craft - once you move beyond those difficult first couple of episodes and the almost crushingly large cast the series deploys, chances are you'll find yourself hooked.  Baccano is arguably a less polished and structured work than Narita's later efforts in Durarara, but its more loose and free-form character driven ensemble tale is at times all the more entertaining for those deficiencies while its happiness to dispense with formalities and paint the walls with blood on a regular basis gives the show a very different feel when matched with its ability to create some death-defying action when the occasion demands it.

If you love anime on account of its ability to create complex and wide-ranging stories, then Baccano fulfils such demands to a tee.  What's more, it's the kind of series that you will want (perhaps even need) to watch more than once, making it a must-own addition to most DVD collections.

English 5.1 and Japanese 2.0 audio, English subtitles.  Extras consist of textless opening and closing title credits, and US audio commentaries for episodes 4, 7, 9 and 15.

8
If you can make it through some heavy-going opening episodes, Baccano is one of the more complex yet rewarding viewing experiences you'll be presented with this year.
COMMENT AND DISCUSS
blog comments powered by Disqus