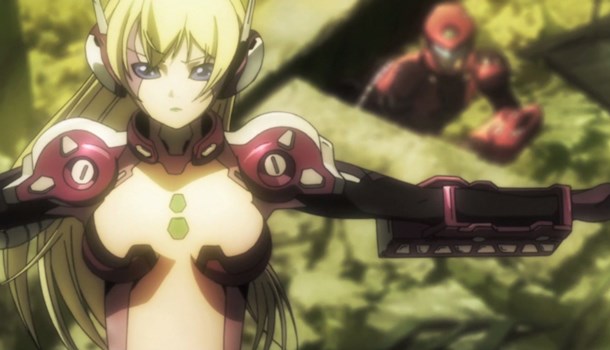 Would you kill if you had to in order to survive? If you knew you had to murder seven other people to escape punishment and death on an island, would you relieve other people of their lives to save yourself? How would you feel if you knew that your being sentenced on this island was someone’s choice, a result of your karma?

BTOOOM is a no-holds barred online game where players have to bait and set traps for one another, using eight bombs of various types and collecting trophies from their fallen enemies to win the game. Once you collect seven trophies, you win. Simple... except it isn’t. Everyone has different bombs of different types, and if you use your radar to see them, they can see you! It comes as no surprise that the best player in the world is a Japanese teenager called Ryota Sakamoto. A NEET living with his parents Ryota is, quite frankly, an asshole. He abuses his parents, is egotistical due to his high stature within the world of BTOOOM, and has a highly selective memory. When he finds himself dangling from a parachute on a tropical island, a green jewel embedded in his hand and a bag full of explosive cubes, he finds himself not in a video game, but in a real world where the rules of BTOOOM apply.

The thing about BTOOOM is that as long as the rules are followed, anything goes. Any grotesque act of humanity is allowed as long as you manage to get eight of the chips from other players. Torture, rape, backstabbing, psychological warfare; all of it is allowed as long as the end objective is achieved and each of the “players” can use their own unique pasts and traits to ensure their survival in this damnable game.

It becomes evident as the game progresses that BTOOOM, and its real life facsimile, are all part of a game company’s methods to create an AAA title on the cheap. Why make CG models when you can just kill elected people on a tropical island? It makes complete sense!  This is perhaps one of the weaker elements of the story. I would have preferred the game to be similar to Battle Royale, where characters are there for a reason - a fight to the death to right the wrongs you have wrought through your life. But no, it's all about money here.

This series is also about alliances and love. It becomes evident as the characters and stories develop that several of the “players” have history, both in the real world and in the virtual world of BTOOOM. Ryota, the former second best player in the world, had himself a virtual wedding and had a relationship with another player in the game. Himiko herself is a broken girl - raped, tortured and treated terribly by those she used to call friends, she is a broken individual. Can finding the one she trusted and loved in the virtual world in real life help mend her wounds?

And what of those who have played a game before? Those who were also “gotten rid of"? And those who won previous bouts of the game?

BTOOOM is a surprisingly complicated series. Even though the story revolves around Himiko and Ryota, it is by no means devoid of further development and intrigue. The series spends a lot of time delving into the background of the characters and why each of them make specific decisions while describing why they ended up on the island in the first place. This is not just a simple hack and slash series, and for those of you looking to learn how to use and deploy explosive traps then this is the anime for you!

Given the subject matter, BTOOOM has been quite a positive surprise for me. The English dub is another of those which excels the original Japanese dub in my opinion, where some of the nastier characters have some truly evil twinges to their voices, which is something that doesn’t come across in the performances by the Japanese actors. This, when combined with the rather troubling dialogue (I still can’t help but cringe at one particular sexual abuse scene) means that BTOOOM is a very explosive anime and not one for the faint hearted. As a result, I am still uncertain as to whether I actually enjoyed the series - I personally found it very difficult to watch in my normal binge style, at least up until the end. Watching the world’s best BTOOOM players go one-on-one gets really moreish!

It might not seem like it at first glance, but BTOOOM is an intelligent series whose characters push the boundary of acceptability. It is hard to like any of the individuals in the show, as they are all damaged and horrible, yet all grasping at the hope that one of them might make it off the island alive.

English and Japanese stereo audio with English subtitles.  Extras consist of trailers for other series, and clean opening and closing credits.