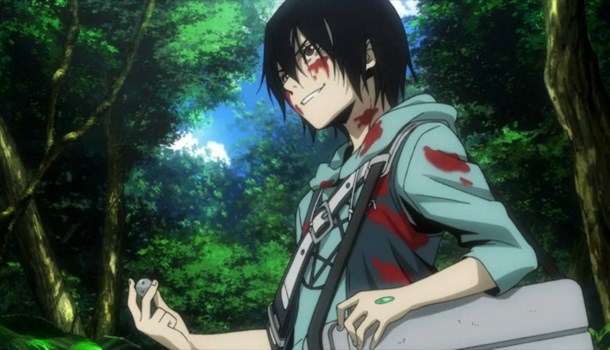 After a summer season which, whilst not bad, lacked any huge hitters that were particularly memorable with the possible exceptions of Sword Art Online (which was good) and Total Eclipse (which was pretty much the biggest letdown of the season), the autumn line-up has got some space to really make its shows sit up and get noticed. It’s certainly off to a good start with BTOOOM!

Our hero Ryota wakes up to find himself dangling from a parachute in the jungle. He has one bag with eight cubes and another with a few personal items and no memory of how he got there. As he goes through the standard motions of wandering around asking himself the usual questions we learn through flashbacks that he is a NEET whose been living at home for several years, refusing to take any job until he can work for the company that makes his favourite game – BTOOOM, of which he is one of the top players in the world.

After being attacked, he realises that he’s been armed with bombs and a strange jewel implanted into his hand which turns out to be a radar device. Slowly but surely both he and the audience become aware that he’s now being made to play BTOOOM in real life!

Although fairly light on characters at the moment, the first three episodes introduce us to three main characters whilst hinting around the edges about other players. Although Ryota is a fairly standard character, and we’ll have to wait and see if he breaks free of his stereotype, the other characters are pretty interesting.  Firstly we have Taira, an old man who teams up with Ryota and fills in the blanks in his memory; then there's Himiko, the series female lead who proves to be somewhat more resourceful than she first appears and I certainly hope that she continues to develop in this manner rather than fall back into the standard love-interest-who-gets-captured-all-the-time routine.

As you may have figured out by this point, BTOOOM is effectively trying to do Battle Royale (one scene in episode three in particular is a really nice homage to that franchise) meets Lost, and actually manages to pull it off for the first three episodes. The tone is pretty dark and serious and there’s very little comedy here throughout the series - although that isn't to say that it's slow or depressing to watch; in fact it’s absolutely gripping!

The animation from Madhouse is excellent just as you would expect – its fluid and the character designs all look pretty good, and the environments that the characters find themselves in are all really nicely detailed too. There’s some occasional CG usage but fortunately it’s very sparingly used at the moment and is never intrusive. The voice work is also really good here with Toru Okawa as Taira being a particular standout despite only turning up in the third episode.

There are in fact only two real criticisms I could lay on BTOOM at this point and neither of them are deal breakers. Firstly, the music is a little bland and the theme songs are hardly memorable. Alongside this, the series definitely feels a little.... sanitised given the subject matter. Although there are a few areas where the dreaded censorship rears its ugly head (this time turning offending portions of the screen black), even with this it all feels very clean. Most of the character deaths are off-screen and one person in the third episode is clearly supposed to have died in an explosion according to the dialogue but is drawn totally whole with a few black and red marks here-and-there. Even Looney Tunes showed more than this! As I said, it’s not a deal breaker and the Blu-Ray release could well slot in some new animation as well as uncensoring things (it wouldn’t be the first show to do so after all), but from what I’ve heard the original manga by Jun'ya Inoue is a much harder hitting work and the cleanliness of this adaptation all feels at odds with the tone of the series.

Overall though, I highly recommend BTOOM. If it can keep things moving along at their current level then this could be one of the best shows this year - as it’s already been licensed by Sentai Filmworks in North America, an official DVD/Blu-ray release is coming at least to the US so expectations are clearly high!

9
A brilliant start - more of the same please!