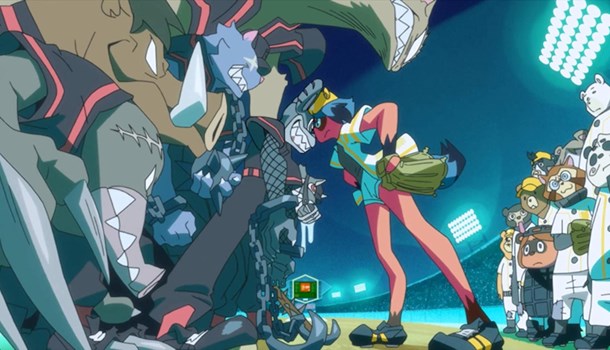 If ever there was a trope for a Trigger produced series, BNA, or Brand New Animal, would be it. From the first to the last frame BNA oozes everything which I have come to expect from a Trigger animated and produced series. You want slick animation? You got it. Vivid colours and over the top action scenes? Absolutely yessiree you got it. Likable main characters and a pervasive sense of dread throughout the series? Oh yes. But, apart from these aspects which I now come to expect from Trigger, what else does BNA have to offer? It's time to dive a little deeper into this transformational anime.

Every culture and pagan religion has an icon who is based on an animal, and while I am not going to dive into them in any kind of detail, in the world of BNA there is a reason why all of these disparate icons share this aspect. It's because they are real. People who can transform into animals, Beastmen, exist and have existed in the shadows since time immemorial, however due to the encroaching human society on the undiscovered parts of the world, their existence can no longer be kept a secret from Joe Public and so they are uncovered and revealed to the world at large. As one can expect, mass panic, outrage and violence breaks out as normal humans join forces to attack those who are different. To resolve this, the Sylvasta Pharmaceuticals Company (a suspicious organisation who cares only for the good of the Beastmen) and the Japanese Government team up to create Anima City, a metropolis not too dissimilar to Zootopia (only without the impossible civil engineering infrastructure) is built to enable all the Beastmen to live together in harmony, and for 10 years, all has been well.

As more and more Beastmen come to the city, stress and tensions rise and it's evident that violence is in the air as all of these disparate species are forced to live together and co-exist. This is where our first main character, Michiru Kagemori comes in. Michiru was a normal high school girl until she and her best friend Nazuna became injured and went into hospital for urgent surgery. Days after being released from hospital, Michiru undergoes a sudden transformation and finds that she is now an anthropomorphic tanuki (a tanuki is a Japanese raccoon dog, and its worth noting that the tanuki is also the representation of the Japanese prankster god, who can transform their shape! More on this shortly.)

Michiru finds herself ostracised and to save herself from violence, she leaves home and heads for Anima city, fighting and avoiding those who wish to harm her and with the help of a trickster mink, she makes it. Hooray! However now she now needs to rebuild her life in this peculiar city and weirdly enough, even though she is surrounded by Beastmen, all of them are in human form. She isn’t. After a while she slowly discovers that she can change her shape, transform and she uses these abilities to help her reluctant friend, Shiro the white wolf, with helping others survive in Anima City.

Michiru also later discovers that her friend Nazuna is also in Anima City and she is also exploring and growing her showbusiness career, though in a very different way than one would expect.

As with many other Trigger series, nothing is what it seems and there is a consistent and growing sense of dread as Anima city is threatened, and it is up to Michiru, Shiro and Nazuna to save the city from destruction.

Lockdown has been good to me as it has allowed me to explore anime again and finally burn through my gigantic watch list. BNA is one of those series which I have been waiting a while for purely as I, and being completely honest here, damn near love anything which Trigger has produced to date. The animation as I have eluded to earlier is sublime, but does suffer occasionally when scenes become too frantic. The colouring of the show is heavily stylised and unique with primary colours used front and centre for almost everything. Colour is everywhere! The character designs are also sublime though the series does suffer a bit from re-use as I don’t think I am the first to notice that Alan Sylvasta is a spit for Andrew from Little Witch Academia, and Michiru does bear a lot of resemblance to Akko as well! The japanese dub is energetic and fun and while the series does have an English dub, I can’t say I have experienced it to give it a solid review. (The dub isn't bad actually - Ed)

Without rambling too long I have to close by saying that I have found BNA an utter joy to watch and while the series is finished satisfactorily, I am left with a sense of “more please”. BNA has been refreshing, fun and just what I needed during this lockdown period and I fully recommend it.

8
An utter joy to watch