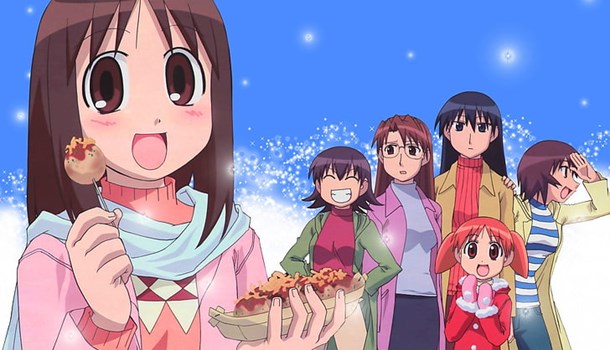 If you pop in an Azumanga Daioh DVD into your machine, you can almost guarantee you’ll spend the next hour or so in stitches. With its host of varied and colourful characters, there’s something here for everyone and the interaction between dozy Osaka, stoic Sakaki, nuttier than a fruit cake Tomo and the rest is comedy gold. Just like the best UK comedies (Blackadder, Red Dwarf, etc) have taught us, it’s strong character contrasts that make the best laughs, and Azumanga Daioh certainly tickles my British funny bones.

It was with regret, however, that I popped this one into the machine, as it chronicles the girls’ last adventures together before they part ways following the end of school. Many viewers may be able to empathise with the bitter sweet sensation created when you move on, and this volume has captured that sensation almost perfectly; with the anticipation of new things mixed in with fond memories and sadness about leaving old friends behind. Of course, that sentiment is echoed by the loyal viewer, who will probably shed a few tears about having to say goodbye to the girls - all of whom are intensly loveable in their own silly ways. I think I’m welling up…

As far as the music for this series goes, I have to say I think it’s one of the best OSTs I’ve ever heard; but bear in mind I am no music critic. (The actual critics among you can probably tell…) The plodding, tinkling, almost slapstick background music always seems to capture the mood of the scenes and both the intro and outro themes are absolutely perfect - insane and catchy to the highest degree.

Animation wise, this series is pretty standard; high quality, nothing majorly impressive, but no particularly awful parts either. Sometimes the detailing is sparse and the background minimal, but as this adds to the comic effect it can only be a good thing.

All in all, a real anime (and ‘coming of age’) classic – adorable characters, comedic situations, big fluffy dog and insane English teachers. Something for everyone, I think.
10
Not enjoyed a series this much for a long time
LATEST REVIEWS