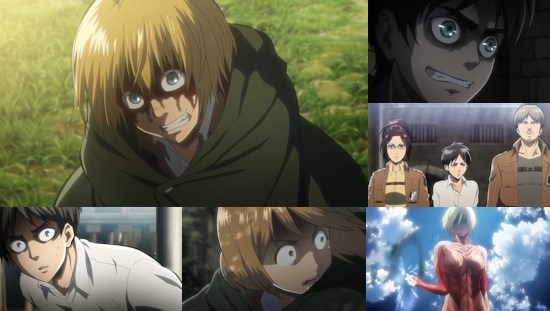 Eren Jaeger might have finished the first half of Attack on Titan as the hero of the day having aided humanity in the retaking of Trost by blocking the gaping hold which left the area as little more than another stomping ground for Titans, but given the nature and circumstances of his assistance our protagonist isn't about the granted a medal, or even praise of any sort.

Instead, Eren finds himself at the heart of a political tug of war, with the Survey Corps led by Erwin keen to keep him under their jurisdiction with a view towards using his new-found powers, and the potential knowledge at his disposal, to go on the offensive against the Titan threat. On the other hand, other factors led by the Military Police see Eren as nothing but a threat himself who needs to be exterminated before he becomes a danger to all and sundry.

Thanks to some impressive (albeit violent) showmanship from Levi, it's the Scouts that win the day, granting Eren an opportunity to foray beyond the walls as he so often dreamed of doing prior to the chaos that kicked off the series - the reality of course is no dream, but rather a nightmare of which he is the centrepiece as we learn that the real threat to humanity might be closer than anybody had dared to imagine...

After all of the compelling, dizzying action and events of Attack on Titan's first half, this second half of the series is initially a bit of a slow burner in comparison as our focus shifts from the threat of the giants which roam the land to the more mundane but equally dangerous threat of political infighting and the possibility of a conspiracy which could compromise humanity's survival from within. In essence, this provides another major shift in tone and focus for the series, moving from an "us versus them" scenario to a situation where nobody can be trusted and the enemy could be absolutely anywhere.

This shift might not have the same immediacy as the first half of the series, but once its groundwork is laid out it makes for a welcome change in tone while still acquitting itself incredibly well in terms of its high stakes action and drama. Indeed, Eren's first outing with the Scout Regiment is arguably the best that the series has to offer - wonderfully realised and thought out in its execution, nerve-wracking, packed with twists and turns and redolent with the same blend of visceral action and terrifying violence that is one of Attack on Titan's hallmarks. This flows into a slightly less well-realised but arguably more emotionally impactful finale to the series, which of course leaves us sat impatiently waiting a second season which will surely come in 2015.

There are some flaws in this second half of the series that we'd be remiss not to mention, however - an ill-advised expository flashback slams the brakes on within the Beyond the Walls arc in a most unfortunate place which breaks a moment of high tension, and while the animation in this home video release is a step up from its TV broadcast version there are moments when overly long still frames or spells of subpar animation temporarily detract from what is otherwise a visually eye-catching and fluid series visually.

On a technical level, this UK Blu-ray release continues to look great and - particularly in the case of its superbly powerful English 5.1 audio track - sounds fantastic to boot. Even if you choose to stick with its stereo Japanese language track, we have no real complaints with the subtitles on this release, and whether you plump for the original voice cast or the almost entirely stellar US cast's performance nothing will detract from your enjoyment of this massive hit series.

Well, nothing that is aside from Manga Entertainment's continuing inability to correctly make use of on-disc chapter markers - hit the chapter skip button at the start of the opening theme and you'll be thrown into some seemingly random point in the episode, while other chapter markers throughout each episode are just as inexplicable in their locations, rendering them worse than useless. The fact that we're seeing this on so many Blu-ray releases from this distributor of late is even more baffling, and we'll certainly be prodding the powers that be to push for a resolution to this small but incredibly annoying issue before it truly becomes an ingrained habit. If you're reading this guys - get this part of the authoring process fixed, and fast.

While the first half of Attack on Titan is easy to identify in its appeal - it goes straight for the jugular and won't let go for a single second until you're spent - this second half of the series is a more considered affair that doesn't have quite the same immediacy. If that sounds like a criticism however then don't be fooled, as this additional flesh on the bones of the series and its change in outlook gives it far more to get its teeth into without losing the visceral, heart-pounding and death-defying action which makes it so appealing. Even if the series has to stop to consider its politics and character motivations more frequently you'll still feel every tumble from a great height; every slice of metal into flesh; every guttural scream will reverberate through you to your very core. That, ultimately, is why Attack on Titan is a sensation that shows no signs of fading from the public conscience.

9
This second half of Attack on Titan is a more considered affair, but it still knows when to deploy its trademark blend of visceral action, death and drama.
LATEST REVIEWS