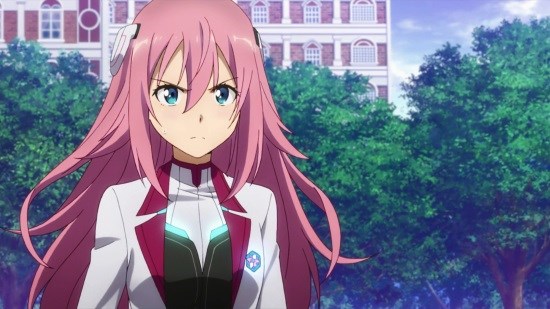 Ayato Amagiri has come to the city of Rikka to search out clues as to the disappearance of his sister Haruka whilst she was a student at one of the city’s 6 great academies for youth who are classified as Genestalla, those bequeathed with the potential for great power after a mysterious comet wrecked havoc  on the Earth’s nations.

Unfortunately, in the process of orienting himself on his first day, an act of unconscious chivalry – returning a handkerchief that lands at his feet – leads him to earn the ire of one Julis-Alexia von Reissfield; princess, swordswoman, and gifted with an affinity for fire. Julis challenges Ayato to a duel, establishing the school's system of formalised duelling. But what the princess thought would be an easy lesson in manners instead reveals that Ayato can hold his own against the student ranked 5th amongst the Siedokan Acadamy’s students, until someone amongst the spectators attempts to interfere and attack Julis whilst she is focused on the bout. After Ayato tackles Julis to the ground to avoid the assailant's attack, academy student council president Claudia Enfield declares the duel null and void.

In the aftermath Ayato begins acclimating to live at Seidokan Academy, finds that his childhood friend Saya Sasamiya is also a student in the same class, meets prodigal swordfighter Kirin Toudou, and finds himself roped into the tournaments that seemingly fuel the social calendar of The Academy City on the Water…

Stop me if you’ve heard this one – young man gains entry to a school for those with a knack for the preternatural and right away runs afoul of a stunningly beautiful, incredibly powerful but insanely hot-headed female student by way of an honest misunderstanding. Queue fights, crazy (and non-IP infringing) weaponry, a growing attraction between our two leads tested by the bevy of young ladies who began to circle around them, tournaments and ridiculously convoluted conspiracies. Welcome to The Asterisk War!

Ok, so that’s selling the series short. Whilst it IS yet another adaptation of a magical school/fighting tournament light novel series, The Asterisk War remains pretty compelling throughout the twelve episodes presented here that serve to introduce us to the core cast, establish how the 6 schools operate, interact, and just why the faculty let these teenagers loose to damn near kill each other in both sanctioned, ranked duels and regular inter-school tournaments such as the Phoenix Festa, of which this set of episodes covers the opening bouts. The answer going off of what we are shown here is mainly that the faculty doesn’t seem to give a damn. No, seriously, we meet like one actual teacher, twice, maybe over the course of these episodes. I have serious questions as to how these academies operate as institutions of learning.

Those questions get left at the door though as Asterisk Wars takes a fairly stock setting and focuses in on telling its story in style with some gorgeous animation and a run of excellent characterisation that raises its cast above the norm.

Series leads Ayato and Julis form an engaging pair – Ayato is basically A Good Dude who could have been blandidly bland of blandland but instead his intrinsic sense of decency means he has a tendency  to stand up to bullies and befriend folks, both of which can have the potential to backfire on him. Then we get his secret and mysterious backstory…Julis meanwhile could so easily have been hot headed tsundre stereotype #29749141 but instead shows far more layers. She is appreciative of Ayato's initial gesture, but the fact he intruded on a lady as she was dressing demands a lesson in manners. When he saves her during their duel she declares that she owes him a debt and when later we find that Ayato is pretty much the only classmate she has ever really acknowledged there is a sense that this young woman has spent her time at Seidokan Academy being fairly lonely, her position as princess placing her apart even amongst several schools full of empowered and/or gifted teens, and the chance to make a friend with someone unfamiliar with her past is one she isn’t going to pass up.

What is somewhat refreshing though is that whilst here is an underlying attraction going on between the two, Asterisk Wars goes to lengths to establish the two as friends and partners over the course of these episodes, with any hints of romance limited to their mutual concern for each other’s wellbeing and Julis’ mild bouts of jealousy at some of the antics of Saya, Kirin and Claudia.

Saya is just brilliant, so deadpan she’d be queen of the cutting comeback if only she could muster the energy. What she does have though is a hilarious assortment of increasingly large and devastating laser guns that stand in stark contrast to the melee-focused fighting styles of most other students we have seen so far, and a defiant jealous attachment to Ayato that he remains blissfully unaware of.

Kirin is Seidokan Acadaemy’s #1 ranked student, inspite of her age and the fact she fights using pure skill and physical ability, and how she grows in confidence after the events of her introduction is an utter delight. Her partnership with Saya is very cool and the episode where they bond is an easy highlight of the series so far (seriously, it’s just adorable, funny, and borderline terrifying…).

And then we come to Claudia. Now I actually like Claudia, as she has a neat duality of an outwardly slightly ditzy debutante, and then the far, far more steely and coldly calculating mind has made her the guiding hand behind Seidokan Academy since her first years there.

Now there are many, many more characters we could get into, including a crop from across the other acadamies as the Phoenix Festa kicks into gear, but the only ones really of note are the Urzaiz sisters Irene & Priscilla, where Irene is the slightly punky berserker who has been corrupted by the weapon she carries to the point she has developed a form of vampirism, and Priscilla possesses an almost Wolverine-like ability to heal so serves as the battery that fuels her sisters power. What I dig is how the two are presented as siblings who genuinely care for one another, but where Irene is the more brash and confrontational Priscilla has no problem calling Irene out for when the situation calls for it.

Now it’s not all perfect. The show does have a tendancy to sudden bursts of fan service that come completely out of leftfield, and tend to be such a tonal change as to be distracting rather than evoke any sense of titillation. There is also an issue with how… on point the names of the six academies are:

Go on, take a moment to guess which academy is run on a knightly theme, and which is ruled by a complete bar*****?

Overall though this was an entertaining introduction to the world of Asterisk Wars, with good VA work on both the Japanese and English dubs, slick animation, and genuinely decent music.

8
It might have nary an original idea, but Asterisk Wars succeeds by virtue of how it tells its story, backed up by slick animation and a winning cast of characters.