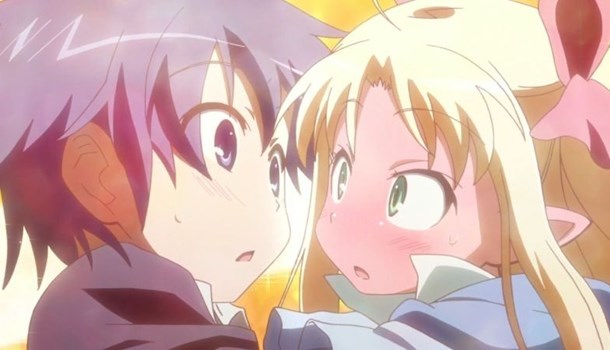 I think the best way to open this review is with a note of caution:

WARNING, The following review of Episodes 1 to 3 of Astarotte’s Toy makes reference to the following:

If the above list of items offends you, the UK Anime Network recommends a mind cleansing dose of Serial Experiments Lain.

Now that the questionable items (bearing in mind that this is the first three episodes only) are out in the open, I can get down to reviewing the actual show without these various distractions jumping out at me.

Astarotte’s Toy is the story of a young succubus princess who needs the life seed of men to live. Princess Lotte is unfortunately scared witless of men due to a trauma borne from the rampant sex acts of her mother, which Lotte watched by accident when she was very little. After a rather boisterous conversation over an inflatable banana in a swimming pool, Lotte boasts that she will only suck the seed of a human male, knowing full well that human males cannot enter their realm. Skip to the next day, and a poor chap in his mid 20s, with a 10 year old daughter of his own, is enticed over to the monster realm with the power of money. From here on in, Naoya is the “pet” of Princess Lotte and the first member of her harem, as much as she detests the idea.

A quick summary of this series would begin with the word “dodgy” and this meaning goes way beyond any of my previous uses of the word. I am not comfortable with the premise of a 10 year old child giving any grown man head. This is not right, period. End of story.

This inherently vile premise of the story aside, Astarotte’s Toy is actually no worse than any of the other harem series which I have in my collection as guilty pleasures (UFO Princess Valkyre to name one) and is actually quite innocent a lot of the time, almost verging on the sweet.

The second episode's primary focus is on Naoya and his daughter Asuha grooming... I mean, becoming friends with Lotte and the relationships between Lotte and her classmates. The conversation verges so close to the inane chatter experienced in so many other middle school anime that it could easily be confused with another series, which is why I am loathed to completely write off Astarotte’s Toy so early.

The series is enjoyable, as in it contains many more laugh out loud moments than other so-called comedy anime due to some of its hilariously inappropriate writing and innuendo. Added to this is the fact the series is well voiced and well presented, and that it has other features and characters which admittedly I look for in a good fan service anime.

My verdict is simple, if any of the items in the list at the top of this review are in your “no go” area, then proceed no further, do not pass go, do not collect your money from the banker.  If, however, you want to watch a series that pushes the limits of common decency to the point where the sheer mention of semen and blowjobs causes you to explode in a fit of laughter, then try the first couple of episodes.  See what you think and report back to us in the comments section. I personally won’t be going any further, but it doesn’t mean that you shouldn’t.

4
Simply not my cup of tea, but it is both seriously funny and decidedly dodgy.