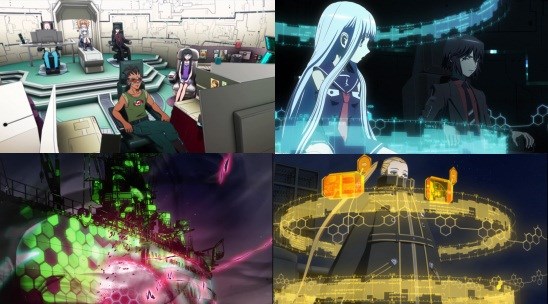 By now there aren’t many genres that haven’t been covered in anime at least a few times but tense, naval thrillers are certainly one genre that hasn’t been attempted too often. Indeed, it’s rare to see anything focusing on a more classic military bearing without at least a few mecha or super-powers being thrown around (though Arpeggio has its own share of the fantastical). Between its subject matter and the risky decision to use full CG rather than take a more traditional style, will Arpeggio of Blue Steel deliver the goods now that it’s been put out to sea?

In the near future the world is under attack by an enemy known only as the Fleet of Fog, who have cut off the various nations from each other by establishing total naval dominance via a fleet of ships and submarines which look like those built by man but housing an array of incredibly powerful weaponry. At a Japanese military academy a group of cadets are taken to a naval base to see the captured Fog submarine known as 401. For one of these students – Chihaya Gunzo – things are about to change. Shortly after visiting 401, he encounters a young girl name Iona who reveals herself to be the humanoid interface (or Mental Model) of the 401 itself, and she tells Chihaya that she is now his to command. Thus the 401, captained by Chihaya and crewed by several of his classmates, becomes a ship wanted by both the Japanese (as no other ships can defeat the Fog) and by the Fog themselves, who cannot understand why Iona would submit herself to a human crew.

Admittedly, as set-ups go it’s more a blend of other series rather than a truly original idea, but Arpeggio fully makes up for this in its excellent execution. For starters the battle sequences are utterly gripping, with the 401 and the Fog deftly working to out-manoeuvre the other. The tension in these sequences is incredible and you’ll be on the edge of your seat as events play out. Anyone who’s seen classic films like The Hunt For Red October will be right at home here. I can’t remember another series that pulled off something like this so well. The characters too are a big hit here - whilst they’re all just fairly standard archetypes at the moment, there's something instantly appealing about them, and the really fun character design doesn’t hurt either! So far the only real character development has been for two of the villains of the show in episode five (one of whom brilliantly ends up trapped in the body of a teddy bear!), but from Iona’s somewhat bemused world view to Oribe’s allergy helmet the cast are off to a great start.

Visually, the series really works surprisingly well - better in fact than some bigger budget films have pulled off. There are a few clunky moments here and there, but the CG animation is generally smooth and the overall aesthetic suits the style of the animation and the genre really well. The production team Sanzigen are also quite clever in their craft, and utilise a number of tricks to save cost and avoid having to worry about complex moves, such as having the cast (pretty realistically) sat down for the duration of the action scenes. Elsewhere the vocal cast do a really solid job here, and the opening theme Saviour of Song is great fun.

I'm very happy to say that Arpeggio of Blue Steel is definitely one of the best and most entertaining shows of the season. Whilst it does have a few issues with its lack of character development and the few odd moments of sub-par animation, the series does so much right that you’ll all but totally overlook such moments, and new episodes are certainly one of the highlights of my viewing week at present. Anyone looking for a solid action series that doesn’t just go through the motions is going to be very happy they were shanghaied aboard!

You can watch Arpeggio of Blue Steel in streaming form on Crunchyroll.

9
Daring to be different... and winning!