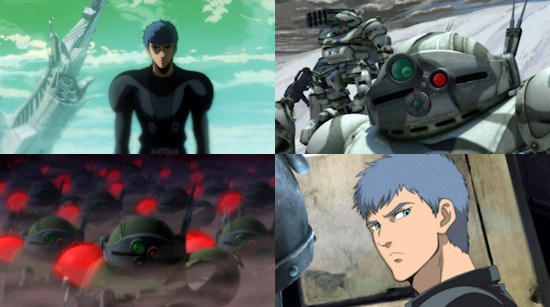 It might not have quite the tranction of Gundam and its ilk, particularly outside of Japan, but Ryoksuke Takahashi's Armored Trooper VOTOMS: Pailsen Files franchise in notable in several ways, from its long-running nature (it began life as a fifty-two episode TV series back in 1983) through to its place as one of the originating shows in the move towards "real mecha" - series with more believable mechanised vehicles and robots from the behemoths deployed to such great success within Gundam.

With VOTOMS enjoying something of a resurgence in Japan of late thanks to the requests of its eager fans, the last few years have seen the release of a number of new works by Sunrise, one of these being 2007's twelve episode OVA Pailsen Files - an OVA later adapted into a feature-length movie, and the subject of this review courtesy of a screening at this year's Scotland Loves Anime; an event which also featured a visit as well as a question and answer session with the affable, charismatic and self-deprecating director Mr. Takashi himself.

Perhaps the biggest issue with diving into the VOTOMS franchise "cold" at this juncture is that it strips you of much of the knowledge needed of what has gone before, most notably in the case of the star of the show Chirico, who becomes a pivotal element in the movie.  That asie, this film wastes no time in introducing us to its titular character Pailsen, a man accused of building his own personal army - the so-called Red Shoulders - using the power and authority at his disposal.  At his trial, intervention from a high-ranking outside organisations coupled with Pailsen himself effectively claiming insanity causes his trial to be postponed, and in the meantime the nefarious aforementioned organisation sets about trying to learn the secrets behind his efforts.

Alongside this, we follow a group of soldiers, Chirico amongst them, as they undertaken a number of what seem to be increasingly suicidal missions, from taking on an enemy base against overwhelming odds to surviving beyond freezing conditions on a hostile alien world.  The possibility of this entire team surviving these scrapes unscathed seems unlikely in the extreme - is there more to these soldiers than simply their ability?  Those watching over their efforts believe so based upon their knowledge of Pailsen's research, and hire this team for themselves to play a pivotal role in what could be the final conflict with peace in a long-running war in sight.

Starting out with the positives of Pailsen Files - The Movie, this feature length take on its original OVA is solidly animated and with adequate CG that works reasonably well with the mechas which prove to be the primary use for this computer-generated animation.  The film's action scenes aren't particularly outstanding in general but do well enough and at least offer up one or two stand-out moments.

Sadly, this is pretty much it as far as the positives go and in broader terms this theatrical arrangement of Pailsen Files is, largely, a mess.  The various story arcs which clearly made up the series are awkwardly cut together, and as we reach the latter part of the movie the revelations depicted are either bizarre or nonsensical - indeed, at times you suspect that vital scenes have been cut from the film entirely as the viewer is left surprised by something which everybody else seemed to have known about for some time!  By the end of it all, you're left starting at the screen with a blank expression of confusion rather than one of wide-eyed awe thanks to a film that makes no effort to accomodate anyone unfamiliar with the Pailsen Files OVA or the world of VOTOMS as a whole.

This is rather a shame, as you get the feeling that there's a decent sci-fi action story hiding within the bare bones of this film - a story which perhaps the original OVA proved far more proficient in demonstrating during its more luxurious running time.  As it stand though, Pailsen Files - The Movie is perhaps an unwelcome demonstratiopn of how not to adapt an anime OVA for theatrical screenings, leaving us with a garbled, baffling and not particularly entertaining mess.

4
The bare bones of a decent story are here, but they're buried beneath an incredibly clumsy theatrical adaptation which feels awkward, disjointed and often confusing.
LATEST REVIEWS