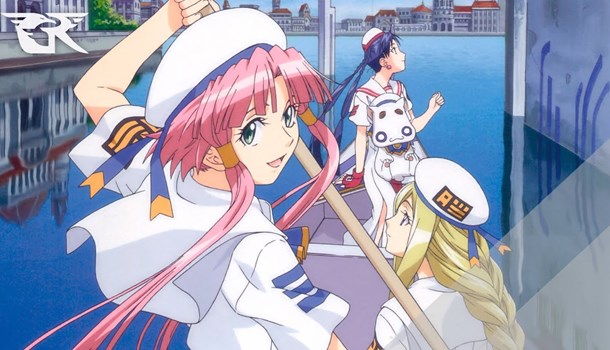 In my usual oblivious way, I’d never heard of the term "healing anime" until after ordering Aria The Animation and then having watched the first several episodes. Record straight: I’d never even come across the series or its sequels before, so for me it was my usual: sounds intriguing, take a punt, what’s the worst that can happen?

The worst of course is hating it and throwing the blu-ray discs out of the window in a fit of extreme pique, the discs scratching the neighbour's car and me getting the bill for it, but instead and from the first several seconds of watching Aria it was like someone giving me a gentle massage or the feeling of central heating warming up a cold room; or both for that matter: softly calming, warm, almost lulling but never vacuous and this at a time when I was feeling stressed and pissed off in general. On a daily basis my patience felt like it was stretched about as thin as pizza dough before it goes into holes.  Pizza, quite fitting for Aria, which takes place in Neo-Venezia, on the planet of Aqua, following Akari, Aika and Alice, three trainee Undines (gondoliers) and their mentors, the three water fairies of Neo-Venezia: Alicia, Akira and Athena; and, of course each of their respective company presidents, blue-eyed cats: President Aria, President Hime & President Maa.

My, my, sounds like not a lot happening then.

Well, well, is it good then?

As if my introduction didn’t give it away, Aria has a quietly hypnotic quality to it that allows each episode to scull gently by, a gondola expertly navigating the story of each episode. Very little actually happens, instead each episode focussing on generating mood and the interplay between the characters. Some episodes I could barely even tell you what happened, though there are repeated framing techniques, character quirks and motifs that reoccur throughout creating an entirely holistic set of 13 episodes.

As a recent arrival on Aqua from Manhome, Akari stands in for us, exploring Neo-Venezia and the wider world, discovering it as we do and making friends for us along the way: whether it is the young visitor, Ai and then Aika in the first episode - Ai becoming pen-pals with Akari, their correspondence framing each episode throughout the series- then later, Alice. The three young undines become mirrors of the three great water fairies, all with different yet complementary personalities. Akari is the sweeter, more innocent abroad, whereas Aika is the daughter of Himeya company and more direct (with her repeating admonishment of Akari: no sappy lines allowed!); Alice is the more detached but a prodigy. The interplay between water fairy and mentor, various friends together, with and between the President cats all feels very precisely worked out, yet is straightforwardly translated to the screen. It feels like an enormous amount of work has gone into the planning and setting the tone (one assumes a lot of this is taken from the source manga and on the discs there are shots of the director, Junichi Sato and crew, visiting Venice to get a feel of the place and how gondoliers actually work) but the lightness with which this is translated to the screen creates an elegant, calm yet frequently magical realist world within which to float.

The end effect is a series of almost infinite charm, so that even those things that for many would automatically arouse sentiment, say the President cats, even for a non-cat person like me they are entirely, instantly lovable. Again, part of this is how even the various presidents’ characteristics are defined, whether President Aria with his pudgy good nature, President Hime with her sleek haughtiness or President Maa with her nervous energy and predilection for biting President Aria’s belly. But sometimes it’s really in the small things, the details where Aria charms: Akari taking President Aria through the water swollen streets of Neo-Venezia, with President Aria in a miniature Gondola; or how President Aria, in what at first seems a purely humorous play with a bowl in which he either sits in it or wears it like a hat, you realise as Akari is practicing her sculling, President Aria is sat in the bowl because it shows how well or poorly Akari is sculling her gondola: does President Aria rock in his bowl or not. So you have charm, humour and the fact that Akari and her friends are learning the art of being an Undine, all the elements fit together in effortless, almost invisible harmony. 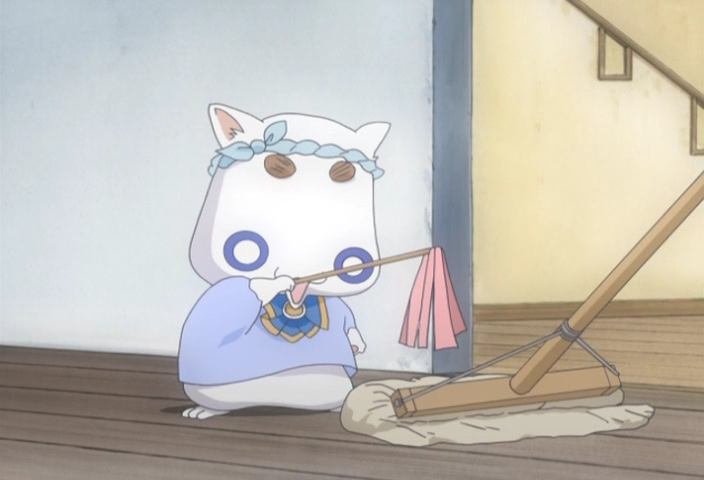 Who says company presidents don't put in the hard work?

This effortlessness seems to extend to the design too, as the Neo-Venezia that we enter into feels like a fully formed world; this is something not to be underappreciated because Akari especially should need to fall in love with it and by extension us too (and yes you will, you have no choice - I command it). You assume it pulls directly from Venice and of course it does, sometimes literally with its own Piazza San Marco – but Aria also presents a beautified, relaxed Neo-Venezia. Though tourists vie for the services of the three great water fairies and gondolas do scull the waters (love the minutiae such as undines calling out as they arrive at blind corners) it’s not a place that is overwhelmed but instead more like a city that is still being discovered and as much a home to its people as it is a tourist trap.

Of course, because the series hails from 2005 the animation won’t be as sharp or as fluid as some newer series but it is more than made up for by the design and is still lovely to look at, and it’s the nuances and the characters and tone that the series evokes that really matters. There's a sense of poetry to the series that, like Girls Last Tour, is hard to define because of the "Nothing Much Happens" nature of the series. Again, it’s getting the tone right, nailing the characters, the sound design, the music, the dynamics, everything just fitting together to feel entirely organic even if not exactly real (we’re on another planet after all).

There are also some intriguing aspects that I appreciate a lot, such as how there is no standard opening – yes there’s the same gentle song, the tone of which fits the series but I’ve always liked the idea of anime without a set opening title sequence (I thought Ergo Proxy might do this after the first episode but of course it didn’t), which allows each episode a little more time to play out in its own natural way without anything extraneous; the magical realist elements too gave the series an additional otherworldliness that added to the sense of wonderment.

If I had a quibble, it would be the final episode. It brings together all our characters, including some other side characters, in a very much "this is a final episode of the series" format, in an attempt to somehow wrap things up when there is nothing really to wrap up. You imagine the creative team felt they needed an episode that would work as a final episode of a series, not knowing what would come after (numerous series, OVAs, films) and you suspect if they had known what would come after they’d have done it differently. Still as quibbles go it’s minor and the only errant wave on the otherwise calm waters of Aria.

I hope that MVM release more Aria series, films, etc. as I for one think we need more anime like this, and not knowing the history of it (were there licensing issues?) surprised it’s never had a release before... or did I miss it? (That is very possible.) Because Aria is quietly beautiful, elegantly designed and the term "healing anime" is right, you come out of each episode feeling somehow more at peace with the world, no matter what may be going insane elsewhere.