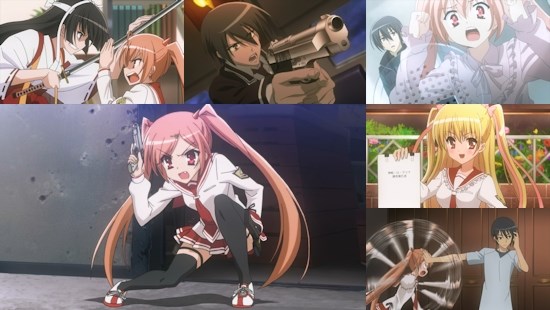 If you're going to kick off a broadly high school-based action anime series, you might as well do it properly by using its opening scenes to introduce a robotic Segway with a sub-machine gun attached to it, a bicycle with a bomb planted on it which will explode if the rider drops below a certain speed, and a girl parachuting upside down out of the sky.  With a throwaway quip that this kind of introduction would "make for a great way to start a manga or something", FUNimation's latest streaming offering for the UK certainly starts with a quite literal bang.

The reason for this action packed start is that Aria: The Scarlet Ammo centres its focus upon Butei High School, an academy for wannabe detectives known themselves as "Butei" - a kind of private detective force for hire that have powers above and beyond those of the normal police.  Unsurprisingly, this kind of law enforcement agency isn't universally popular, and thus as we join our protagonist (and the target of that booby-trapped bicycle) Kinji Tohyama talk is still rife surrounding the so-called "Butei Killer" - a recently arrested murderer who systematically targeted these detectives before sending them to various grisly ends.

This brings us to that girl with that parachute and the show's titular character - Aria Kanzaki, a girl as short in stature as she is of temper, and a genius Butei who is nonetheless impossible to work with on account of her attitude.  After literally thrusting Aria and Kinji together, we also learn the embarrassing secret behind Kinji's own talents as a Butei; a secret which is arguably the reason why he wants to quite studying or working within this profession, and also the vehicle for much of the fan service that foists itself upon the series.

Yes, that's right, I said fan service - for all of its action credentials at a base level, many of Aria's scenes are played with titillation in mind.  Aria of course is the centrepiece of all this - we get to see some of her bra in episode one (we only miss out on more courtesy of censorship) and naturally Kinji walks in on her naked in the shower at one point (with anything of importance covered by steam, of course) - but even the secondary characters are there either to bring sexual references into the picture or play on other well-worn female character tropes.

To be honest this switch to such over-used attempts to build up a group of doting girls around Kinji is a real disappointment; the whole "super detective school" construct of the series has plenty of potential to be both interesting and fun, as demonstrated by a good opening episode (which even leverages its fan service pretty well) before the rot sets in incredibly quickly.  This problem is summed up perfectly by future action scenes in the episodes which follow, the first of which simply replaces Kinji's bike with a school bus (in other words, it rips off Speed over 15 years too late to be "cool" while doing so) before moving the action aboard a private jet in an encounter that comes complete with a plot twist that is as stupid as it is lazy.

Overall, "lazy" pretty much sums up many aspects of Aria: The Scarlet Ammo.  Okay, animation-wise it's the usual kind of relatively polished offering we've come to expect of J.C. Staff (albeit not helped by a blend of censorship and FUNimation's low quality stream), but that aside both its characters and plot contribute to what is ultimately a tepid affair where it really feels like it shouldn't be.  Admittedly much of this suffering is almost certainly down to the quality (or lack of) of the show's light novel source material, but if ever proof were needed that simply bundling voice actress Rie Kugimiya into a tsundere action heroine role won't necessarily net you another Shana, this is it.  You could probably call Aria: The Scarlet Ammo "Shana with guns" on paper, but in practice it doesn't even live up to that billing - it might open its gambit by looking promisingly like a "guilty pleasure" of a series to watch, but come then end of episode four any semblance of pleasure was drained away to leave a series which initially flattered to deceive.

You can currently watch Aria: The Scarlet Ammo in streaming form via FUNimation's YouTube channel.