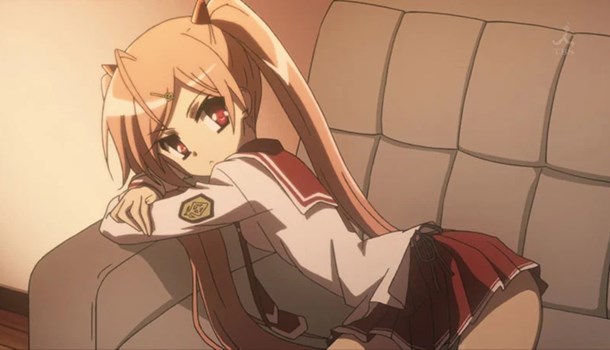 A couple of years back I had a certain experience which was brought back into my mind while watching Aria: The Scarlet Ammo. I was visiting the Big Smoke and me and some friends were heading down a back street somewhere when the group suddenly crossed over to the other side of the road. This confused me and I pulled up short, wondering why - the only thing ahead on the pavement was a policeman at a street corner. I hurried after my friends and asked what was going on, and the grimacing, anxious answer surprised me - "the cop's got a gun."

True enough, the policeman did - he had a MP5 slung across his waist, lazily resting his forearms on the receiver. Still, I didn't see the relevance - so he had a firearm, and...? Why would that make us start playing live-action Frogger any more than casting our eyes on a park bench or pay-and-display machine? Nonetheless it seemed that my companions were actually, actively worried and disconcerted by the very sight of a weapon. It honestly baffled me; I couldn't understand what the problem was. "Come on, guys," I chided them, "it's only a gun, it can't do you any harm." Their appalled expressions taught me that maybe I think a little differently to most others.

The modern Briton's overblown irrational fear of the innocuous tool of the firearm is something to be lamented over another time. I am pleased to say, though the that the inhabitants of the world of Aria: The Scarlet Ammo have no such hangups! It may share a name with a different and quite relaxed anime, but Neo Venezia this certainly ain't.

Modern Japan, normally such a peaceful and pleasant country, has been afflicted by an inexorable rise of crime. As wrongdoing spreads beyond the ability of the police to contain it, Japan has adopted the Butei system - augmenting law enforcement with the skills of freelance private eyes who can go abroad armed to solve crimes and capture criminals for bounties. A new school, Butei High, has been incorporated on an artificial island in Tokyo Bay to train this new class of crime-fighters - a place where a teenagers' curriculum includes forensic analysis and SWAT room-breaching as much as it does History and Maths, kids carry pistols with their pencil cases, and a bulletproof blazer is part of the school uniform!

One of these young bounty-hunting Butei is Kinji Toyama. He is, however, a reluctant member: despite being a pupil of Butei High, Kinji despises the troublesome and tiresome interference of Butei's work into the simple, straightforward and serene life that he desires, and he intends to quit the Butei life altogether - the only reason he hasn't yet is because he needs to hang on until he can turn in a decent grade in exams so he can transfer out to a good (and more conventional) school. Not everyone appreciates that subtlety of intent, though - Butei already have a strained relationship with a public who resent their gun-toting careering through the streets, and some time ago a "Butei Killer" even murdered several of Kinji's fellow alumni. While the Butei Killer is now in prison, when a hapless Kinji finds a bomb planted under the seat of his bike, it becomes readily apparent that there's a copycat on the loose! Kinji doesn't want trouble, but it seems determined to find him - and when he's plucked from his volatile velocipede by Butei High's star, the pint-sized Aria, plummeting from the rooftops to rescue him in a wild BASE-jump, that's no escape either... because Aria's looking for a partner in crime(fighting), and she believes that her detective's eye has discerned a germ of potential in Kinji that she's going to pull out of him, like it or not.

Aria: The Scarlet Ammo is based on a series of light novels published since 2008 by Chūgaku Akamatsu, with illustrations by Kobuichi, who has also been involved with the design work for the Is This a Zombie? series. The light novels are still ongoing but a one-season anime adaptation aired in 2011, reaching us today courtesy of Manga Entertainment.

Trying to get a handle on the protagonist Kinji exposes an early problem with the series, that being its clumsy pacing. At the start of the series Kinji slots neatly into the "bored indifference" category of harem lead like a round into its chamber. I suppose it's a step up from the "quivering violet" class, but as he callously pushes away those who care for him and maunders about grumbling with tired exasperation about everything, we're left wondering why exactly we're supposed to give a damn about this tiresome dweeb. A reason does eventually emerge for his attitude (briefly, almost as an aside), and after that he does start getting more involved, repairs his attitude and improves markedly as a character and becomes someone worth following, but the show makes the mistake of giving this reason a few episodes in rather than in the setup, and building up frustration with the characters is not a good way to start a series. The setting is also established in a couple of clumsy and blunt expository info-dumps in the first two episodes, where the action is literally interrupted mid-flow by a cut to Butei High and a teacher delivering a lecture. It also suffers from being a limited adaptation of a significantly larger work - while the series itself follows a contained story arc in searching for a set of criminals who have framed Aria's mother for a grotesque murder, there are multiple references to an overarching organisation named "the EU", yet we anime viewers have no idea about who they are, what they do or what they want (other than Being Evil, presumably. And maybe a cheap place to export BMWs).

I said earlier that Kinji didn't want trouble, but that trouble was determined to find him - and he can't escape it because it's part of himself. He suffers from what he calls his "Hysteria Mode" - his mind says no, but his body can't resist. While Kinji normally wants to keep his head down, when his "Hysteria Mode" is on he becomes smart, smug, confident, cunning, alert, acrobatic, wilful, witty, and a superb shot who can send a bullet down an enemy's barrel.  That is to say, he becomes entertaining.  "Hysteria Mode" also has a very distinctive trigger - to get the hormones flowing, he needs to be aroused!  Apparently Kinji has his Hysteria Mode due to a "rare genetic abnormality". Yes, Kinji, we're all aware of this. It's called a Y-chromosome, something I'm not sure that you possess considering your activity some of the time!

Does this charge up the motor to a combat speed, though? Aria the Scarlet Ammo does provide a fair amount of decent action and good CGI and while that action may appear a little derivative, with Speed take-offs and Equilibrium-style gun katas, it's given with confidence and a spicing sense of threat and danger too - the "bullet-proof blazers" not being a convenient excuse for bloodless combat, bringing a real potential for harm. When the opening scene involves Kinji being chased by a robot Uzi on a Segway it's also an entertainingly self-aware appeal to the absurdity of the concept which shows that it's not too straitlaced and willing to roll with fun action-adventure.

That said though, some of the crises that the characters encounter pull that absurdity further than it will stretch - a plane need to make an emergency landing and there's no runway  - good thing that there's a three-mile long barge with no people or buildings which just so happens to be floating in the bay! They even call it "Empty Island!" What are the odds? Seeing as the show is keen on taking from movies they really missed a trick in imitating Con Air and having the plane grind its way down the central strip of the Butei High's island. As the series progresses it also goes beyond gun-fu and begins to introduce ESP and supernatural elements, which I felt was spoiling the focus on the initial teenage-troubleshooters concept.

The sound of Aria: The Scarlet Ammo is not especially distinguished. The opening and ending sequences are both unremarkable (although the ED animation is quite cleverly tied into the cliffhanger its episode ends on at one key moment, as eyes close and open) - while the OP has a decent beat it's tarnished by some tinny ricochet samples that bring to mind an old Lethal Enforcers arcade booth more than hi-octane action. The in-episode music comes across as a selection of generic library themes and nothing stands out. However, the dub does improve the experience - while there's some disconnect in that the female characters don't affect cutesy voices matching their designs (Hotogi's Valley Girl isn't quite what I have in mind when I think of a doting shrine maiden), they do put in decent performances with varied tone - returning to Hotogi, she can sound really bitingly sour when Kinji keeps brushing her off; Kinji's voice actor makes a believable transition between his ordinary and "Hysteric" personas as well. The script also effectively translates a variety of lines to keep conversations flowing naturally and colloquially, and if anyone has been frustrated with Kaze's erratic subtitles, Manga Entertainment are a lot better with their own, with all of the important environmental text receiving an appropriate translation note. The two episode commentaries included in the collection are suitably placed, covering an "action" episode and a "comedy" episode so we can see the cast's approach to both sides of the coin.

Aria: The Scarlet Ammo has an interesting objective of combining action with ecchi to appeal to two separate markets and it does work reasonably well. Kinji's unwanted "Hysteria Mode" does let the anime lightly touch on the theme of lineage, with characters feeling oppressed by weight of expectation (Aria is an improbable descendant of Sherlock Holmes, and later in the series we meet Lupin the Fourth). If you stay beyond the stumbling first quarter of the series it does hit its beats, although it remains largely conventional in both of its spheres (if not relentlessly average) and the supernatural elements don't fit between them at all. Aria: The Scarlet Ammo seems similar to a blank round - it has noise and smoke to catch the eye and the ear and it's key to encouraging play and activity, but at the end of the day it leaves no real impact.

6
An interesting experiment in combining two types of anime. It brews up a sparky firecracker, but not quite a powerful bomb.