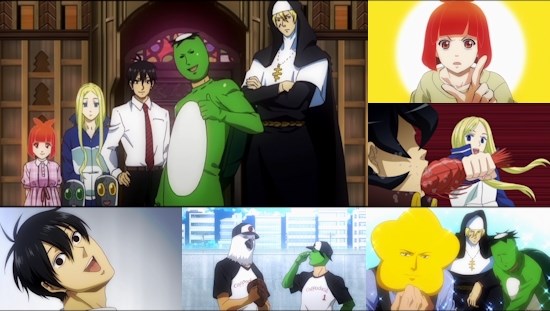 "Men are from Mars, women are from Venus" - it's a tired old saying, but in the case of Arakawa Under the Bridge it at least borders upon the literal truth, if only according to Nino, a girl who lives her life under the bridge while claiming to anyone who'll care to listen that she's a Venusian.

Of course, by this point those of you who have watched the first series of Arakawa Under the Bridge should be more than familiar with both Nino and the other members of the community she resides under the bridge in question with, right the way through to our protagonist Ko Ichinomiya, or Recruit (aka "Rec") as he's become known. Assuming that familiarity, you probably don't need to be told that this second series - amusingly titled Arakawa Under the Bridge x Bridge - continues to revel in its depiction of the daily lives of this collection of oddballs viewed through Ko's at least mildly less odd lens.

In fact, this second series even broadens the show's roster somewhat, introducing (albeit rather fleetingly) a manga artist who imagines himself as the captain of the Earth Defence Force, and an Amazon warrior woman who switches personalities between powerful tribeswoman and lovesick teenage schoolgirl at the drop of the hat. It's only the latter character who really gains any traction within the series, as she falls for Recruit and kicks off of a whole chain of incidents surrounding him, Nino and Hoshi.

This addition aside, it's pretty much as you were for the rest of the series, as we join the Arakawa crew for everything from the creation of a haunted house to a film project instigated by P-ko. All the while, Ko looks for ways to get closer to Nino and learn more about her mysterious past, with mostly negligible results. Oh, and the show ends with a battle royale involving most of the cast, obviously - it's the only way to end an anime series, right?

If anything, these episodes embrace the abstract, surreal insanity of the show's premise even more completely, shooting off in some implausible directions in the name of deriving comedy from its larger than life characters by putting them into some ludicrous situations. Thankfully, this works pretty well for the most part thanks to a combination of enthusiastic voice acting (if you've ever wanted to hear Hiroshi Kamiya swooning, giggling and playing around like a little girl, this is the show for you) and some snappy writing filled with great one-liners that often upstage any visual gags.

Speaking of visuals, SHAFT once again prove that this is a studio that fits this kind of comedy down to a tee - the series delights in silly facial expressions and over-the-top presentation that accentuates the insanity, but reigns in those excesses when required when the series presents its occasional but heart-felt sweet and touching moments.

This brings us to the biggest disappointment of Arakawa Under the Bridge x Bridge, that being what it doesn't do. At one point in the series, a tearful Nino tells Recruit that she wants to return home, but doesn't want to leave him or the other residents she is now so fond of. This seems crafted to set up an emotional and fascinating second half to the series, allowing us to delve into Nino's background and reveal her past while also showing the lengths Ko is willing to go to for her. Having spent so much time with the cast at this point, this is a tantalising proposition, yet it's then left by the wayside from the remainder of the show - the prospect of a visit to Venus and the preparation for such a trip is played for comedy (and some really good comedy at that, admittedly), and we're left feeling deflated by the decision not to bring any kind of closure to the emotional crux of the series. To allow such a great setup to slip by is almost criminal, and reduces the series to simply an accomplished gag comedy when it seemed to have designs on being so much more than just that.

In terms of presentation, this DVD release of Arakawa Under the Bridge x Bridge is simple but effective - as a subtitle-only release there's no English dub to consider, and extras-wise we have nothing but some promo spots to enjoy; the lack of textless credit sequences is rather a shame here as the show's opening theme Cosmos vs Alien is stained-glass amazing. Video quality is mostly good and only occasionally leaves you pining for a Blu-Ray release, and the Japanese audio track is a top-notch and a lot of fun as previously mentioned.

If the first series of Arakawa Under the Bridge was a slow starter which rose to impressive heights, then you could argue that this second season is the opposite - it starts out on a high, but fizzles out as the series progresses and it fails to capitalise on some of the promising ideas it introduces. As a whole, this is a series that is perhaps best consumed in small doses - watching huge gobs of abstract humour tends to rob it of some of its unique value - but one that is certainly worth consuming if you're hungry for anime comedy and are happy for that comedy to be served up with a hefty dose of the surreal. It doesn't deliver everything that we hoped from it, but that certainly doesn't stop it from being funny.

7
It fails to follow through and execute on some of its most interesting conceits, but this is still an enjoyable - and more importantly, funny - comedy series.
LATEST REVIEWS