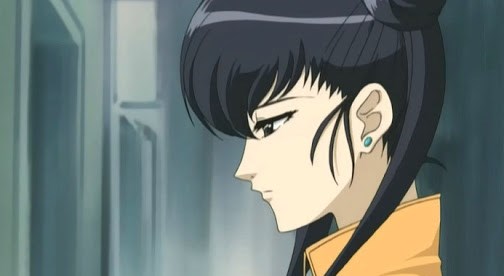 Aquarian Age sounds like it should be one of those dull fantasy animes with a dose of mixed up mythology and a heavy sprinkling of clichés. In fact it seems to be a slightly more modern take on a genre which seems to require you to learn stuffy background histories and a whole new vocabularly for every show you watch.

The main character, Kyouta, is in a rock band with his friends Shingo and Junichi. He plays the harmonica. Quite why they let him play the harmonica I don’t know. Maybe he can’t play anything else, although if the worst comes to the worst they could always have given the poor sod a triangle or a cymbal or something. (Disclaimer: Yes, the harmonica is indeed a fine instrument, with many amazing features – it’s just a bizarre choice for a guy his age, which makes me wonder whether he’s seriously misguided about what’s cool or if he’s trying to be ‘alternative’. Either way I am suspicious) Anyway, they play in Kyouta’s room and dream of being famous, until one day they get a lucky break and are picked up by a talent scout from Cosmopop at a New Year’s show. Meanwhile, three brightly coloured ribbons of light race around the city, destroying things, whilst mysterious and attractive strangers look on. It’s not clear from the first few episodes what’s going on beyond some kind of conflict that involves magic, cute young girls, monsters and Kyouta’s friend Yoriko, who is somehow involved. Kyouta can see what’s happening, but either doesn’t believe it’s real or is too lazy to do anything about it.

Kyouta’s band gets most of the coverage in the first few episodes, as they cope with the trials and tribulations of becoming overnight rock stars. The odd cameo from other, weirder characters reminds you you’re not watching Beck, but the series isn’t in a hurry to tell you anything about what’s going on. If you’re really curious you can always read the booklet which has a handy glossary about the different factions, but it might spoil some of the surprise for you. Suffice to say it’s not a simple two sided war, and there are plenty of factions involved. The Arayashiki are introduced at the end of episode 3, where they promise a dance in supplication for victory and then stand completely still for a few minutes. Personally if I was their god, I’d make them lose just because of that, but I guess we’ll have to see what happens.

From a technical point of view I have to honestly say this is the first time I’ve ever heard an anime with surround sound on these crappy speakers I have, which either means it’s either really good or far too overdone. However, I also have to add that the cool futuristic voice sounds some of the characters have are not cool at all when you can’t understand a word they say.

Animation wise, it’s very polished but has moments of lazy, time saving animation, but nothing so bad it spoils the enjoyment of the series.
8
So far, an intriguing start to this three volume series
LATEST REVIEWS