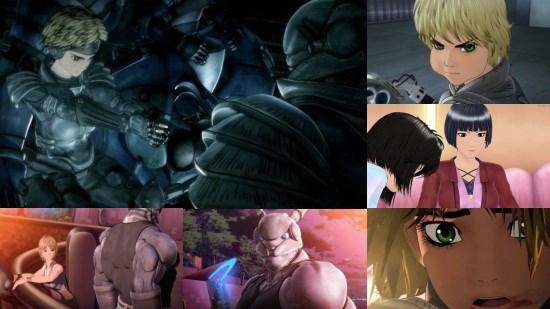 To say that Appleseed has been a success born out of people getting fed up with it might be harsh but not entirely unfair. After releasing four volumes, the manga went on hiatus in 1989 and series creator Masamune Shirow hasn’t published a chapter since despite having referred to it as his life’s work. By 2004 the Japanese were clearly fed up with waiting and ten years on we’ve had two full-length films and now this series, Appleseed XIII, perhaps hinting that whilst everyone likes his art books and calendars, if Mr Shirow would go and actually finish Appleseed everyone would be rather happy.....

The story behind the series is just as fascinating as the series itself (though don’t expect to hear about this in the extras, which are more focused on the production of the series).  The story goes that following the first Aramaki film, a series called Appleseed Genesis was announced in 2005 to be released in 2006. Everything looked set to go, with a full staff and voice cast lined up, when production suddenly ceased and a lawsuit began. The full reasons for this appear to be unknown, though one suspects budgetary reasons may have been behind it given that the series (which was to be a full twenty-six episodes) was set to be a direct sequel (or possibly prequel) to the Aramaki movie and like XIII would utilise the same visual style as the film. After the dust was settled Micott & Bassra, the production company involved, tried to get things going again but no animation studio wanted to be involved in the series (perhaps fearing a repeat of events). Eventually an agreement was reached with thirteen separate animation studios that each would produce one episode for the series that became Appleseed XIII (also released theatrically as two compilation films). By this point for whatever reason, the decision was made to cut all connection with the Aramaki films bar the visual style.

First off, don’t be fooled by the visuals. Despite taking its visual cues from the Shinji Aramaki films, Appleseed XIII is a totally separate entity, serving neither as prequel or sequel that doesn’t retell the story of the manga either. In this version of the futuristic paradise of Olympus, tomboy heroine Dunan Knute is a hard-working though naive and headstrong rookie on the E-SWAT taskforce working alongside the powerful cyborg Briareos. In XIII, the normally ambiguous relationship between the two is thrown out the window with the two instead being established as lovers, though the series somewhat mercifully keeps well away from how the more physical aspects of the relationship work. These changes to the series certainly take some getting used to as all your preconceptions about these characters go out the window, particularly in the case of Deunan who you keep expecting to be a cool, action heroine rather than the pouty, child-like character she is here. Not to say this is a bad thing once you get used to it, but it definitely serves to make it clear that this isn’t the Appleseed that you remember.

Throughout the series E-SWAT works to deal with extraordinary crimes from a zombie attack (no, really!) to an aerial hijacking where the hostages appear to have vanished. There’s also a story arc involving Olympus' efforts to launch a Bioroid-controlled spacecraft to seek out new resources and the political relations with neighbouring city Poseidon. The stories are generally really interesting and are full of the kind of meandering philosophical debates that you expect from a Masamune Shirow work, combined with the fast-paced combat that the last two Appleseed works put on display.  It’s actually really impressive just how much the series makes work – even an episode revolving around a robot developing a friendship with a little girl manages to dodge the bullets launched at it and is actually quite sweet rather than hideously saccharine and annoying.

Visually, Appleseed XIII is a bit of a mixed bag. As previously stated it copies the style of the last two films (one suspects largely to try and cash in on their success than for reasons of artistic merit) but the budget just wasn’t there to make things stand out as much, and the series thus resembles a set of animatics from the Aramaki films – just waiting to be tightened up and have the final layers of polish applied. It works well enough but it’s very noticeable that the money just wasn’t available, particularly if you start paying attention to character clothing and hair which have a very video game-esque feel to them. Briareos in particular also suffers from pretty poor character design and his face lacks a lot of the fine detail it needed to avoid looking like it was made out of Play-doh. There’s also an utterly bizarre and out of place fetish for Grecian statues and stained-glass windows going on throughout the series. Presumably these are intended to serve as a metaphor for on-screen events but it really just comes off as annoying, lazy and unnecessary. Sound-wise things are better, with a solid if not exceptional soundtrack and one of the best dubs to come out of FUNimation in a long time, with some of the company's veterans really going all out rather than just falling into their standard vocal ranges.

Once you get used to the changes and adapt for the visuals this is a pretty solid series. It has just enough of the usual tropes of a Shirow-inspired work to suck you in, and the changes to the characters quickly move to the back of your mind whilst you watch the newer ones at work. There’s a lot to like here and whilst it may not be the series we were wanting and expecting it’ll certainly do, especially with Aramaki showing no signs of getting Appleseed 3 going.

English and Japanese 5.1 audio with English subtitles.  Extras include thirteen "making of" featurettes (one for each episodes), comentary tracks and trailers.