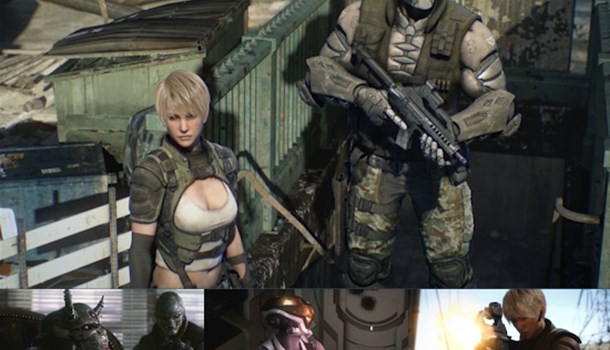 Throughout its various iterations, we've never quite been able to shake the idea that Appleseed isn't living up to its potential - its CG incarnations in particular have boasted some impressive visuals and eye-catching scenes, but have never taken the next step towards capturing either the hearts or brains of those watching. However, Appleseed is also a franchise that - much like its leading characters - endures through thick and thin, which brings us to director Shinji Aramaki's latest foray into its franchise, Appleseed Alpha.

Before we even begin, there a few things to point out here - the film is all motion captured CG and so arguably doesn't qualify as animation at all if that's something you might take umbrage at (which you really shouldn't - entertainment is entertainment, does the source of the on-screen imagery matter?), and the movie is also targeted primarily at a western audience, boasting a native English cast and script. What's more, no prior knowledge of the Appleseed franchise is required here, for this is a prequel to any of the events depicted in either the original manga or previous films.

Indeed, as we join young female soldier Deunan Knute and her cyborg companion Briareos, this pair are a long way from their eventual home of Olympus - instead this talented pair are scraping by, living as mere mercenaries in a world torn asunder by war and running odd jobs for a rather loathsome individual known as Two Horns.

The lives of both Deunan and Briareos are about to be shaken up massively however, as a routine job to dispose of some rampant military drones brings them into contact with a pair of shady individuals who get caught up the chaos wrought by said drones. This man and young girl claim to be on an important mission for Olympus, a utopia which is treated as little more than a pipe dream by most outside of its confines, and although suspicious of the pair and their true aims our girl-and-cyborg team have little choice but to assist them as they find themselves subject to the same pursuit as their new uneasy allies.

With Deunan dreaming of discovering Olympus, and Briareos questioning the reason for his continued existence at all, perhaps the events set in motion are exactly what they both need to move forward in their lives - assuming that those lives are still intact as they come into contact with some particularly dangerous individuals along the way.

From the very outset, Appleseed Alpha's attitude is a decidedly in your face one - the film begins with an action set piece set to dubstep, and the film from that point forth is a chain of action set pieces interspersed with dialogue and exposition after one action scene which sets up the next. In that sense, it's rather like watching somebody play a video game, as exposition is followed by mission over and over again - not a big surprise when you realise that the film's script writer boasts God of War and Star Trek games on their CV.

We should point out that this isn't inherently a criticism of Appleseed Alpha - as a lowbrow action movie full of huge explosions, bullets flying and bombastic music and effects its really rather enjoyable, and its pace and flashy CG visuals ensure that you'll never get bored throughout the duration of the film.

Perhaps the bigger question here however is whether this is actually what you want from an Appleseed movie - we suspect you could replace Deunan and Briareos with a pair of original characters, rename other plot elements and this film would still function identically without issue. Thus, you start to wonder why this movie is associated with the Appleseed name at all beyond the hope that its cache will bring people flooding to watch it.

The feel of this film as a mimic of a Hollywood blockbuster rather than a considered Masamune Shirow work also extends to its characters - Briareos is a cynical walking tank who fires out quips as fast and frequently as he does bullets, and Two Horns is an uncomfortably stereotypical over-the-top black gang boss who can be occasionally cringe-worthy to watch. The plot of the film is serviceable but unspectacular, and certainly won't require too much thought between bouts of gun and rocket fire.

The constant spectacle on offer is certainly helped along by the film's visuals - they might not be cutting-edge in CG terms but still look excellent throughout and offer up a real visual treat, backed up by that aforementioned thumping soundtrack and a competent acting performance by most of its cast if you're willing to forgive a few clunky moments.

So, we can probably sum up Appleseed Alpha as "Appleseed for the video game generation" - bold, brash, bright, insistent, but without anything that will require further thought or discussion once its closing credits have rolled. For those steeped in the entirety of the Appleseed franchise this will probably seem like a criminal waste of its original source material, and they might be right, but set that aside and treat Appleseed Alpha as a straightforward, uncomplicated CG action film and it offers up a steady stream of entertainment for its duration.

Appleseed Alpha was screened in Glasgow and Edinburgh as part of Scotland Loves Anime 2014. It's available in the UK digitally from October 13th, and on DVD and Blu-ray from October 27th

DVD and Blu-ray extras consist of a film-maker's commentary and eleven part "Making of" documentary.

6
This is Appleseed for the video game generation - lacking in any real substance, but enjoyable as an eye-catching parade of high octane action scenes.
LATEST REVIEWS