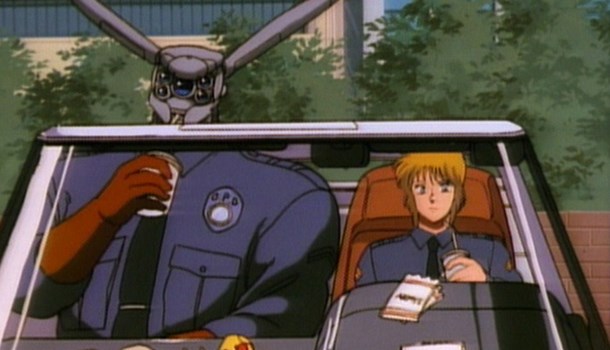 Set in a post-apocalyptic wasteland, Appleseed follows the trials of survivor Deunan Knute, who is plucked from her desperate surroundings and relocated to the utopian city of Olympus, a city controlled by manufactured humans called Bioroids. However, Duenan’s selection was far from random, and her past is linked into the creation of the city itself. Just what role her parents played, and how this affects her, is yet to be uncovered.

You get the feeling that Shirow really wasn’t happy with the 1994 film of the same name, and it’s not hard to see why – it was Shirow-lite, with all the trademark political machinations and human frailties stripped away, leaving us with a ho-hum action movie that could have been set anywhere. Clearly the success of Ghost in the Shell has forced the animators to raid Shirow’s archives, and this resultant CGI spectacular is the result.

Utilising a new type of animation, which fuses human movement with cel-shaded onscreen personas, Appleseed floats somewhere between the real world and animation. The result was initially quite jarring – the movements of the characters really are more realistic – arms swing naturally, walking looks more authentic, and as the animation is generated by the computers, there are less budget-saving pan shots and static screens, all of which provides a more realistic palette with which to draw the viewer in.

However, the faces are harder to take – whilst the movement of the body as a whole seems more genuine, the facial expressions show far less emotion than their traditionally animated counterparts, and as such it can be harder to empathise with the leads. It’s this lack of emotion that provides the film’s only real weakness, but once you get used to the strange computerised faces smiling at you with their dead eyes, you do start to get pulled in. This eventual immersion may also have something to do with the amount of mech action which builds towards the end of the film, and looks nothing short of stunning.

Directed by the sure hand of Shinji Aramaki, who also Directed the BubbleGum Crisis OAV’s, the mech battles were full of promise – and they deliver spectacularly. With the production values of a Hollywood blockbuster, the Landmates and Cyborgs look amazing, moving around with weight and purpose, with some of Shirow’s best designs never looking better than right here, locked in combat.

The city of Olympus also looks fabulous, fully realised in living, breathing colour, the giant structures are surrounded by lush countryside and some of the best CGI water effects I’ve ever seen, anime or not.

So we can safely say that it looks the part. It also sounds fantastic, thanks to the calibre of the artists contributing to the soundtrack, not least of which is Paul Okenfeld, providing fast paced urban rhythm to compliment the action thundering across the screen.

So, how does it fare against it’s 90’s counterpart in terms of storyline? Well, its still Shirow-lite, but at least this feature remains focussed on its subject matter and condenses numerous volumes of the Appleseed world into one easy-to-digest volume. From what I’ve read of the manga, the overall storyline remains accurate, though certain liberties have been taken with events – for example, unlike the Manga, our main protagonist, Deunan Knute, is captured alone at the beginning of the film, with her partner Briareos already in-situ at Olympus. In the manga, they’re recruited together.
Of course, this means that much of what made the manga so intriguing has also been left on the cutting room floor, but then you were never going to be able to pack that much exposition into a 2 hour feature.

The route that has been taken, with action ahead of intricate plotting, leaves us with a Bruckheimer style production which keeps you on the edge of your seat and your brain firmly in neutral. The film never stops buidling the tension, and by the time we get to the epic fineale, it's a truly dizzying spectacle.

It may not please fans of Shirow's dense mythology, but for those with an open mind, this stands as one of the finest action anime films released in the UK to date, and every fan should bag a copy for their collection.

9
A Bruckheimer-esque action flick, with plenty of eye candy and a breakneck pace.