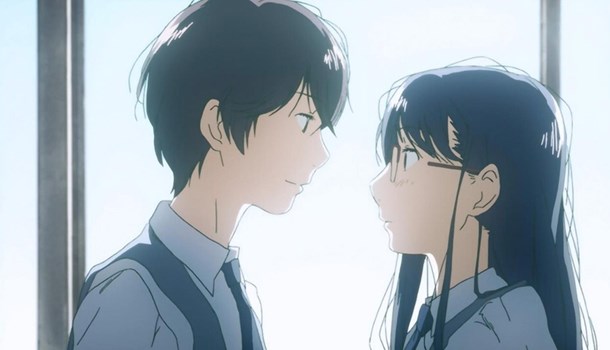 Based upon an ongoing manga which has been running in Japan since late 2004, Aoi Hana (or Sweet Blue Flowers to give it an English title) is the latest series to make its way out of J.C. Staff's studio - Luckily, it's also made its way to the UK via streaming on Crunchyroll, so is this brand new series which has just finished airing in its native country worth a look?

Aoi Hana tells the story of Fumi Manjome and her childhood friend Akira Okudaira; a pair separated when Fumi's family moves away, only to be reunited again many years later as both girls begin their lives as high school students at two different but nearby schools.  While Akira's life seems to be a relatively care-free and simple one, Fumi appears to be continuously burdened by problems - Harbouring a deep-seated but unrequited love for a cousin who is just about to marry, then falling for an older girl named Yasuko Sugimoto, the coolest girl at her school who also has a fair share of love-related burdens of her own.

As the series goes on and further characters are introduced, so a relatively tangled web of friendships and relationships begin to develop as the girls progress through their first year of high school, with a large portion of the show set against a drama club's production of Wuthering Heights - A choice which, to some extent, ironically mirrors the progress of the anime and its two main protagonists themselves.

If you haven't guessed by now, Aoi Hana is very much a yuri series, so if the idea of girls falling in love with girls fills you with either horror or abject apathy, then look away now.  Having said that, for all of its lesbian relationships there's very little in the way of intimacy on show here, with only a single on-screen kiss within the series as a whole.  Indeed, the modus operandi of the series as a whole is a very subtle one - If you're looking for bitchiness, overblown drama and raised voices then you won't find much of that kind of soap opera here, as this show prefers to quietly progress its story and characters as they go about their lives no matter how much inward turmoil or emotion they might be feeling.  This gives the series as a whole a very genuine and human quality about it, a quality which can make for quite the compelling viewing experience assuming you can find yourself empathising with or relating to the major characters.

It's really these characters and the way that they're portrayed that a show like this must live or die by, and although you can argue that both Fumi and Akira simply occupy stereotypical positions (with the former a quiet, reserved bookworm and the latter an energetic, brash and outspoken girl) they never lose the feeling of being genuine people.  Thus, at times you might well find yourself sympathising with one of the girls over a particular dilemma, but at others you'll be irritated by their handling of a situation, as this bunch of adolescents stumble through the difficulties of teenage life without ever breaking their respective characters or veering off in strange directions.

Its this quiet, almost reverential internal consistency which makes Aoi Hana enjoyable to watch - It never rushes to pack in drama or trashy plots in the name of entertainment, preferring what could almost be seen as an old-fashioned determination to tell a simple tale about ordinary girls without deviation.  It's a quietly beautiful simplicity that follows the series right through to its conclusion, helped along the way by some excellent and expressive animation; while that simplicity may bore some people, on a personal level it felt like a breath of fresh air compared to the over-bearing sense of drama some romance-centric anime insists upon.  Between its place in the yuri genre and the unspectacular nature of its plot it certainly won't be for everyone, but in its own particular way Aoi Hana is the kind of series that can leave you with a warm, fuzzy sense of satisfaction if you give it time to win you over.

At the time of writing, Aoi Hana can be viewed in streaming format from Crunchyroll - The entire series is now available to be viewed for free on the site by all users.

7
A quiet, slow-paced and subtle series, but it's all the more realistic and character-driven for it.
LATEST REVIEWS