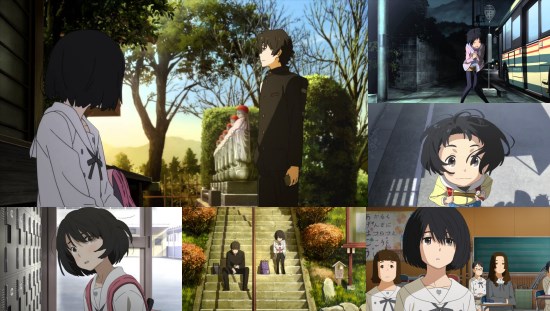 Young Jun Naruse is as bright as a button - ceaselessly talkative, and like any bright child perpetually immersed in worlds of her own making. In particular, Jun is infatuated by the castle (actually a local love hotel) at the top of the hill in her town, and she dreams of being the princess invited to a ball at this castle at the behest of a beautiful prince. Imagine her surprise when she discovers her own father as the prince in question, leaving the castle on his trusty steed. Unfortunately, the princess is another castle... back at home, cooking a dinner which is promptly interrupted when Jun tells her mother the tale of where daddy has been.

The fallout of this unfortunate series of events is inevitable, and its Jun who bears the brunt of both of her parent's animosity as they split - she's told in no uncertain terms that what has transpired is all her fault, and as a result (as Jun would have it at least) a curse is put upon her by a particularly rotten egg, forbidding her to ever speak again.

Fast forward a number of years and Jun is a now a high school student - no longer bright and bubbly, but effectively mute and unwilling to talk to anyone, even her own mother. Given her reclusive nature, Jun is terrified when she's selected as part of her class Community Outreach group, tasked with putting on some kind of performance for the townsfolk. Mind you, she isn't the only one unhappy with this state of affairs - apathetic Takumi Sakagami has nothing better to do but would rather be doing nothing, injured baseball star Dai Tasaki sees the whole thing as a pointless effort, and good girl cheerleader Natsuki Nito only keeps quiet about her dissatisfaction to protect her reputation.

In short, the whole project is all set to be a disaster until an act of serendipity potentially changes everything - Jun overhears Takumi messing around with an instrument while singing a little ditty that resonates unexpectedly with her. Is Takumi her prince? Can he see into the hidden depths of her heart? Jun may be impossibly quiet but there's plenty of passion burning beneath that mute exterior, leading to Jun confronting Takumi about his "ability", sowing the seeds for an unlikely friendship that slowly but surely extends out to the rest of the outreach group and beyond.

Thanks to a slightly flippant but earnest suggestion from Takumi that Jun may be able to avoid the "curse" that wracks her with pain when she speaks by singing instead, the outreach group find themselves preparing to perform a musical for the town's residents, in turn finally giving Jun an outlet for her feelings and a fairy tale version of the life story which has defined her. She isn't the only student carrying a burden however, and perhaps her desire to present her feelings no matter the medium is exactly what the other members of the group also needed to inspire them.

It would be easy to latch onto Anthem of the Heart as simply a film about the power of words, and make no mistake it is certainly that - the harm of an ill-placed comment unleashed without thought and the damage that words can do to another are the true curse that plagues Jun, as she fears that the things she says will only hurt those around her. However, it would probably be more accurate to say that this is a story about feelings - the pain of emotions left unexpressed; the importance of being honest and earnest in transmitting your feelings to others; the realisation that some thoughts and feelings should be left unsaid.

What makes Anthem of the Heart work so well as a delivery mechanism for this simple idea that feelings and expressing them are important is the strength of its cast. Anime, and anime with romantic elements in particular, is so often based around misunderstandings, but not so here - in fact, it's almost the antithesis of that kind of storytelling device. Every member of the main cast, no matter how much or little screen time they get, feel like fully fleshed out individuals who seemingly start out as archetypes until layers of their character are peeled back to reveal more underneath. This in turn ensures that the cast gel as a cohesive unit - they all seem so different at first, but when it comes down to it they all have similar hang-ups and troubles that are holding them back or driving them forward in the wrong directions. In these terms, Jun is the glue that holds the group together - she understands as well as anyone the pain that can come from communicating with others, and her earnest and open nature in this regard both helps those around her and cements her place in their hearts. Jun's burgeoning relationship with Takumi also feels sweetly organic, even before the plot goes to further lengths to link their past experiences.

With a few exceptions, this story is delivered with a deft touch - Jun's parents are perhaps played up as a little too unforgivably monstrous in their actions, but beyond that the film's drama feels grounded in a way that AnoHana (produced by the same studio, director and writer) never did, which is much to its benefit. Invoke enough suspension of disbelief that a child would refuse to speak for a decade and never be taken to therapy (a big ask, I grant you) and you can't help but share in both Jun and her new friend's heartaches and worries, and celebrate in their victories as they come to terms with both their strengths and weaknesses. If we're going to make comparisons to other works by script writer Mari Okada, I'd probably point to Hanasaku Iroha as a closer bedfellow of Anthem of the Heart - it knows when to let its characters loose in the name of comedy or light-hearted moments, but is always capable of reeling them in instantly and believably when the situation requires it.

The film also has a quietly beautiful presentation to it that matches the deft handling of its drama. The use of Jun's internal fairy tale of an egg which has cursed her to map her progress as she comes out of her figurative shell isn't exactly the height of original symbolism, but it works well and also gives Jun the chance to voice her feelings as a narrator to overcome the issue of having a character unwilling to communicate via speech with others around. Outside of the symbolic, the film's character designs are all excellent, and the broader visuals are pretty but never enough so to distract from the facial and bodily expressiveness of the characters - again, something which is all-important in Jun's case specifically.

The musical backdrop of the film also allows it to play with telling Jun's story in an appealing and imaginative way, as Takumi reinterprets old songs from musicals or classical pieces by layering them with lyrics which tell the story Jun herself has written. It sounds as cheesy as anything on paper, and in a way it is, but unless you have a heart of glass you'll at least be feeling tears pricking your eyes as the final performance of the group's last musical number unfolds before you at the climax of the film. With a glorious insert song accompanying the inevitable montage sequence midway through the film (hey you don't want to watch hours of people rehearsing and painting backgrounds, right?) the movie is strong in every area of its presentation.

I'll be the first to admit that I went into Anthem of the Heart with a dose of scepticism in my pocket alongside my cinema ticket - I found Anohana to be a frustrating experience, and the similarities in both staff and outlook between that series and this film left me cynical. Boy am I happy to be proved wrong, though - Anthem of the Heart is a real triumph, that takes a simple but important tale with a lesson we could all learn from and turns it into a living, breathing and subtle drama packed with emotion but never losing sight of its mission to entertain. Sure, it has its issues - Jun's psychological scars from her childhood would never have been left to fester like that in reality, and her parents feel unreasonably written as Very Bad People to the point where there's no room to sympathise with them at the film's admittedly far from original climax - but if you can buy into those facets of the movie then you'll be richly rewarded. Much of Anthem of the Heart could so easily have turned into an average, forgettable teen drama, and its ability to stand out from such a packed crowd is truly commendable.

Anthem of the Heart is being screened around the country as part of the Japan Foundation Touring Film Programme. It has also been licensed for a UK home video release by Anime Limited.

8
This anthem may be easy to recognise but it's capable of touching any heart, and is highly recommended as a result.
LATEST REVIEWS