UK Anime Network - Anime - Anthem of the Heart, The 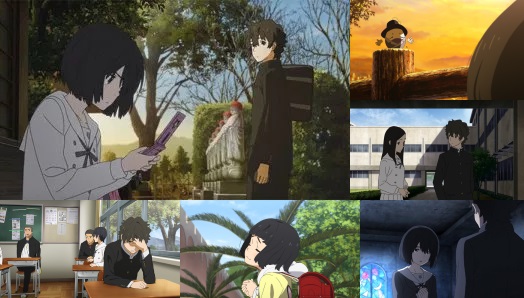 Anthem of the Heart, The

It really is becoming a fantastic year for anime films in the UK. Between the smorgasbord of films currently up for theatrical release, Scotland Loves Anime and a whole slew of home and digital releases it's like some of our greatest fantasies have come true. Now into all this comes 2015's Anthem of the Heart from A-1 Pictures courtesy of Anime Limited, so lets see if it can charm our socks off or if that anthem becomes a dirge.

Jun Nanase is your typical young girl - happy, imaginative, likes to talk - so when she sees her father leaving the grand castle on the hill with a princess she of course rushes home to joyfully tell her mother the good news and see if she's going to be a princess too. Unfortunately such young girls are (hopefully at least) unaware of the meaning of the term 'love hotel', and without realising it Jun has unwittingly become the instrument of her parent's divorce. Fortunately help is at hand to offer some "constructive advice" in the form of an egg wearing a hat who may be a fairy, or possibly even a prince. He advises Jun that in order to make sure she doesn't cause herself any more problems she should stop speaking all together. Fast forward a few years and Jun is still silent - now in high school much to the consternation of her mother, but her life and vow of silence are about to be turned upside down as her teacher arbitrarily determines that she should be on the committee for the schools community outreach program. Oh, by the way, they'll be performing a musical...

Anthem of the Heart is a really fantastic piece of film. Jun is an instantly sympathetic character living out a life in which all her problems seem much closer to reality than many other such works present. At the same time her willingness to change, to work to overcome her problems - to find her own voice if you will - makes her a character that you are instantly behind and there's not a moment in the film's two hour running time that you aren't rooting for her.

The rest of the characters prove equally likable if a little thinner drawn. Love interest Takumi delicately sidesteps just about every cliche in the book and manages to thread the needle of being a really strong second lead without his story ever threatening to overtake Jun's narrative. The other committee members are a little less well served, with ex-baseball star Taiki's subplot never quite feeling fully fleshed out and Natsuki's romance plot seems to have a few scenes excised at the scripting stage that would have rounded things out. These are niggles though, as the main thrust of the film is and should be Jun.

The film's visuals are absolutely beautiful; A-1 Pictures and director Tatsuyuki Nagai (A Certain Scientific Railgun and Toradora) do a fantastic job with some really original character designs and some superb background work. This is all helped along by the film's pretty amazing soundtrack, which spends much of it's time overlaying new lyrics onto classic musical pieces. In particular a reworking of 'Over the Rainbow' threatens constantly to bring tears to your eyes, particularly when viewed in context with the film. The fact that music essentially works here is a way for Jun to start expressing herself and means that the soundtrack has to do quite a lot of heavy lifting, but it pulls things off flawlessly.

Anthem of the Heart is a fantastic film with a brilliant, heartwarming story that you'll love... and then you'll really want a boiled egg...

9
Not so much an anthem as a glorious full-fledged opera full of great characters, great drama and all the eggs you can eat!
COMMENT AND DISCUSS
blog comments powered by Disqus