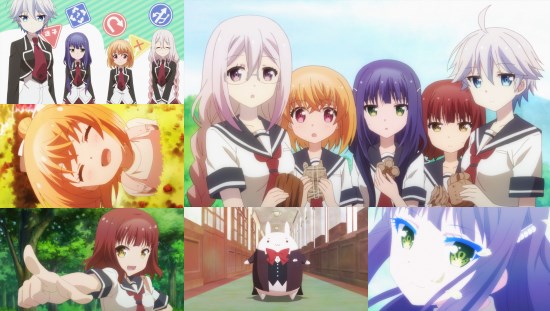 It's one of life's little oddities that something calamitous can happen to you, yet the fact that it wasn't worse will see you informed that "you were lucky". Surely it's bad luck than something terrible happened to you in the first place?

Imagine, then, if such misfortune were part of your everyday life, engrained in every fibre of your being as an inescapable cycle of bad luck that could similarly be described as "lucky" that said misfortune didn't end up having much graver repercussions. Such a problem would seem impossible to avoid, but that's not how the elite Tennomifune Academy sees it - indeed, it's set up its a class within its academic system specifically tasked with teaching the unluckiest students you could hope to meet to overcome their poor luck and find happiness. Is such a thing even possible? If any school is equipped to achieve this lofty goal, surely one which sports a robot rabbit dressed as a butler fits the bill.

Still, titular star of Anne-Happy (titled Unhappy Go Lucky in its English manga form) Anne Hanakoizumi is very much a "glass half-full" kind of girl - she's certainly more than capable of seeing the lucky side of her incessant misfortune, and her sunny disposition seems almost impossible given the odds which choose to stack themselves against her whatever she does. In comparison to her new friends at the academy, who are far more cynical about their lives and prospects, she's a breath of fresh air - but is she also a freak of nature? If nothing else, amongst all of her charges her teacher at Tennomifune seems very keen to keep an eye on her progress.

To give you an idea of Anne-Happy's outlook, the robot butler-rabbit (he's called Timothy and has a bit of a penchant for rapping, by the way) isn't even vaguely one of the more bizarre elements of the series, and it's actually what makes the show tick in a surprisingly successful manner. The series is part slice of life school-going series, part bonkers surreal comedy a la Pani Poni Dash, in a way which feels like it owes more than a little debt to Baka and Test: Summon the Beasts thanks to the way that much of its content is structured around school activities that are anything but normal.

Neither side of this equation is particularly unique, yet somehow when mixed together the two make for very satisfying bedfellows. The show's cast aren't particularly outstanding in terms of how they're introduced or developed by they work perfectly well to aid the comedy and camaraderie at the show's disposal, leaning into its sense of weirdness (particularly when it comes to revealing the strange truth behind the otherwise normal Ruri's place as something of a loner initially), but they are all pretty fun to watch and easy to like no matter how much they sit firmly within the tropes they're assigned.

Even though the stereotypical nature of these characters means that you can usually see how any given scenario might play out a mile off, that doesn't really matter as most of the scenarios the group are caught up in has a consistent and sharply realised sense of comedy - it doesn't always hit the mark, but between strong one-liners, absurd situations and some more traditional anime comedy that plays into the strengths of those character tropes it keeps the laughs coming at a surprisingly solid clip that transcends the more rote elements of the show.

Also helpful in this regard is Silver Link's animation style, which borrows heavily (as you might expect of a studio formed from its former staff) from SHAFT's treatment for series like Hidamari Sketch - it's colourful, character designs are appealing, episodes are frequently broken up with little superdeformed outtakes and interstitials, and it feels like the show was fun to produce in a way which is decidedly infectious to the viewer.

Add some catchy theme tunes and equally colourful credits to go with them, and Anne-Happy ends up being more than the sum of its parts - it doesn't do anything spectacular and you'll never quite shake the feeling that you've seen it all before, but it can't be denied that this is a proficient comedy series makes the most of the tools at its disposal. It's cute, it's silly, it'll make you smile and even laugh out loud... and sometimes a show should be celebrated for achieving those goals when it's all you need an anime series to do.

You can currently watch Anne-Happy in streaming form on Crunchyroll.

7
A surprisingly solid and frequently funny blend of slice of life comedy - better than it probably has any right to be.
LATEST REVIEWS