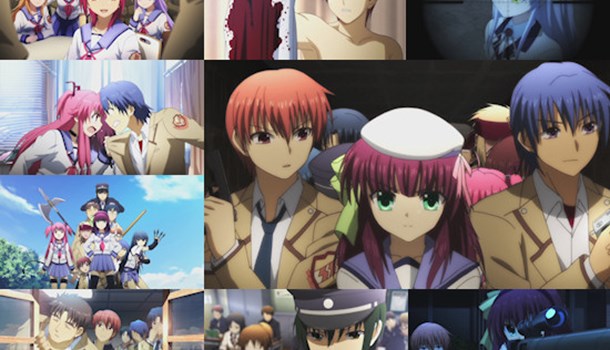 As the first episode of Angel Beats begins, we find our protagonist awakening in the dead of night in the middle of school grounds, with a bunch of armed students on one side and a harmless-looking but supposedly lethal "angel" on the other.  Oh, and he's quickly informed that he's dead, too.  I believe this is the epitome of what counts as a "bad day".

The brainchild of Jun Maeda, best known for visual novels produced by Key such as Air and Clannad - the latter of which is now coming to DVD in anime form also via Manga Entertainment - Angel Beats contains the unmistakeable air (no pun intended) of such works.  At the heart of the story is a young lad named Otonashi, who upon his death somehow finds himself thrust into the kind of purgatory that only anime could feature - a high school.  With no memories of his life prior to this point and no real grasp on his new situation, Otonashi has little choice but to follow the self-assured leader of the so-called (for this week at least) "Not Dead Yet Battlefront", Yuri, as they fight to prevent themselves from simply vanishing from this world.  Their enemy?  Ultimately, God himself, but more personally his supposed messenger, the frail-looking but super-powered student council president known only as Angel.

If all this talk of death, deities and the afterlife sounds like heavy stuff then fear not, for a lot of Angel Beats couldn't be further from such existential pondering.  Instead, a large chunk of the series is played out almost purely for laughs - the fact that none of the characters can die (or rather, die again) no matter what happens to them is a source of constant mirth early on, with a booby-trap laden second episode perhaps the highlight of the entire series in comedy terms.  Even beyond this, there's no shortage of snappy one-liners, exuberant arguments and dumb outbursts, as well as a bonus OVA episode at the end of the series which requires the entire Battlefront collective to over-react to everything with a ridiculous outpouring of enthusiasm which is hilarious with both the Japanese and English voice casts.

If this reliance on comedy and jolly japes are the bread and butter of Angel Beats, then its meat is far more substantial - all of our characters are placed within this odd purgatory due to an unfulfilling life which came before it, which makes for some harrowing stories outlining the past of various individuals, and fulfilling any previously held dreams means facing the terror of simply disappearing once you "find peace", which makes for an obvious emotional crux for the series.  These dual pillars make for some sudden, yet no less compelling, changes in tone as the show balances laughter and tears to a surprisingly effective degree.

Finally, the series also features what I can only dub as a "cynical cash-in" element. Ignoring the roster of gorgeous and undoubtedly merchandise-worthy character designs that themselves serve as one of the highlights of the series when coupled with P.A. Works' sumptuous animation (which makes picking up the series on Blu-Ray eminently worthwhile), the show also features a "house band" - Girls Dead Monster, who are charged with distracting both the school's NPC students and Angel herself so that the rest of the Battlefront can carry out their plans.  As the band churn out songs over the course of the series, you can't help but feel that it's all just another opportunity to sell a boat-load of singles and albums off the back of the series - thankfully, the music is so damned good that it's hard to feel upset about it; if anything, you'll probably be clamouring for someone to bring GlDeMo's output to iTunes sooner rather than later.

While we're being cynical about the show, we should also point out that Angel Beats contains plot holes that you could drive a fleet of buses through and plot twists that feel like they were made up on the spot - yet, amazingly, none of this particularly detracts from the series as a whole, particularly when you're watching it in a concentrated form on DVD or Blu-Ray rather than week by week as per its original TV broadcast run in Japan.  Provided you aren't going to take the intricacies of its fascinating world too seriously, Angel Beats is quite simply a huge amount of fun to watch - wildly entertaining and filled with great, eminently quotable, characters, but with a soft centre that will have anyone with an ounce of human compassion sobbing helplessly on at least one occasion as it drops its emotional payload.  Add in that great music, a superb background soundtrack, and those fantastic visuals, and you have a complete package which makes for an excellent whole that is perhaps greater than the sum of its component parts.

In terms of its UK release, our Blu-Ray review copy looked great (although splitting the show's episodes with nine on one disc and five on the other is decidedly odd) and sports an English dub that does a very good job with the source material even if it can't quite match the enthusiasm of the Japanese voice cast on occasion.  Our only real bugbear here is the absence of the short Another Epilogue OVA - sure, it's only two minutes long, but as an alternate ending to the series it's an important part of the story as a whole so to miss it here is a real shame.

This is, however, a relatively minor quibble set against a series that works on so many levels as a whole; leveraging a unique concept and bringing it to life in a shower of genuine laughter and equally genuine tears.  Taken on face value its one of the most entertaining rides anime has taken us on recently, and once you start watching it'll keep you coming back for more relentlessly until the very end.  That fact alone makes it one of 2012's must-buy anime releases in our minds.

English and Japanese DTS-HD Master Audio stereo audio, English subtitles.  Extras are made up of the series' bonus OVA episode, Stairway to Heaven (although sadly not the Another Epilogue alternate ending), and text-free opening and ending credits.

8
A hilarious comedy on one hand and a tear-jerking tale of unfulfilled desires on the other, Angel Beats manages to balance these two polar opposites to create a hugely fun and entertaining series that looks and sounds great to boot.
LATEST REVIEWS